On the evening of the grand jury’s decision in St. Louis to not bring charges against police officer Darren Wilson for the shooting death of Michael Brown in August, protests took place in cities across the United States.

In Philadelphia, People Utilizing Real Power, which describes itself as “an all of the above activist organization based in North Philadelphia,” pre-planned a demonstration to take place at City Hall at 5 p.m.

Following the news Monday evening that Wilson would not be indicted, PURP members Felix Nnumolu and Naveed Ahsan and hundreds of other protestors attempted to block the onramp to Interstate 76. This lead to Nnumolu and Ahsan’s arrest and detainment that evening.

The next afternoon, PURP led another protest that began at City Hall and then marched to the edge of Temple University’s campus.

The crowd amassed at the corner of Broad Street and Cecil B. Moore Avenue, hoping to engage members of the North Philly community who have been negatively impacted by the growing imprint of Temple’s campus. Word for the protest was spread through social media using #FergusonPHL.

Police officers blocked Broad Street at Cecil B. Moore Avenue and Norris Street. News and police helicopters circled overhead, low enough that the thumping of their propellers could easily be heard from the ground. Students and community members rallied together, shouting spoken word through megaphones, expressing their anger about police brutality and gentrification.

“A young man was killed on Uber Street, Christopher Green,” continued Lundy, referring to an October incident. “He was shot about thirty times. When the morning news came on, they said he was shot on the fringe of Temple’s campus. The minute you say it happens on Temple’s campus, you limit the conversation to asking questions to the students instead of the people who are out here suffering everyday.”

The protesters reached Broad and Cecil B. Moore just after 5 p.m., as the sun was setting. They then headed west on Cecil B. Moore and turned south on 21st Street. Along the way, protesters banged on bucket drums, blew whistles and shouted chants., 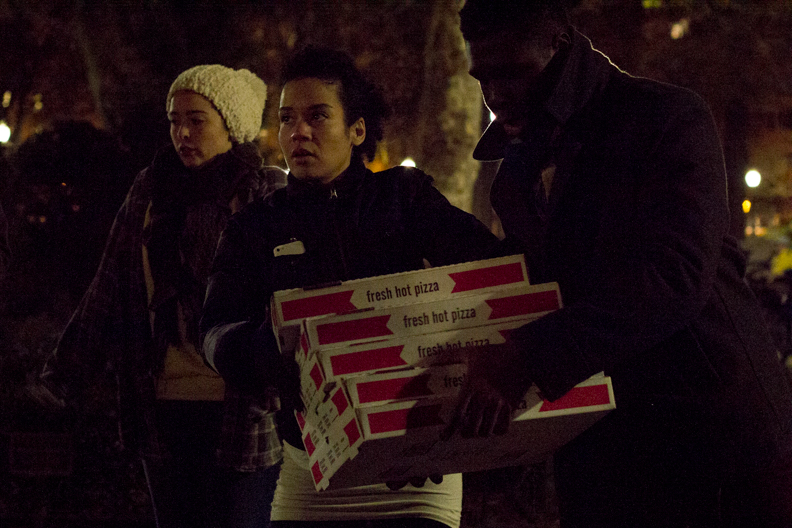 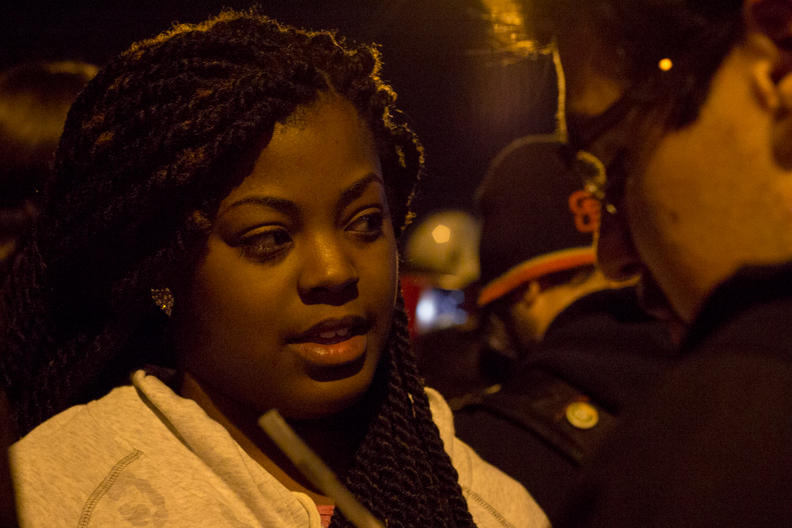 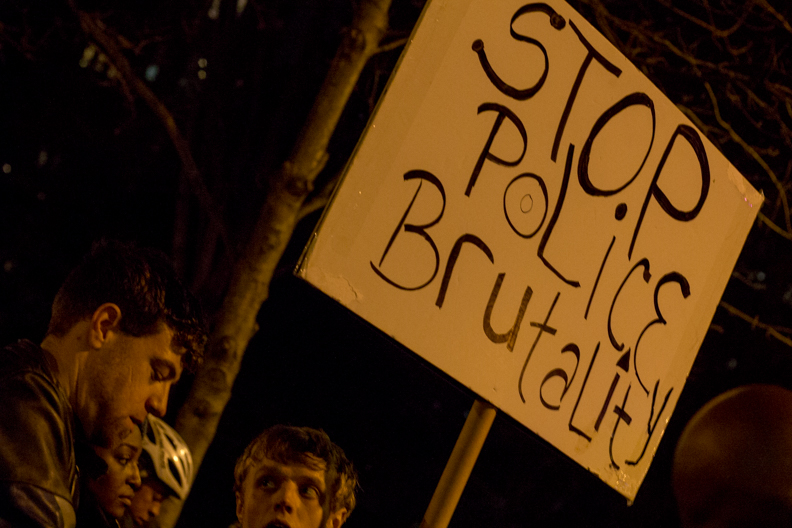 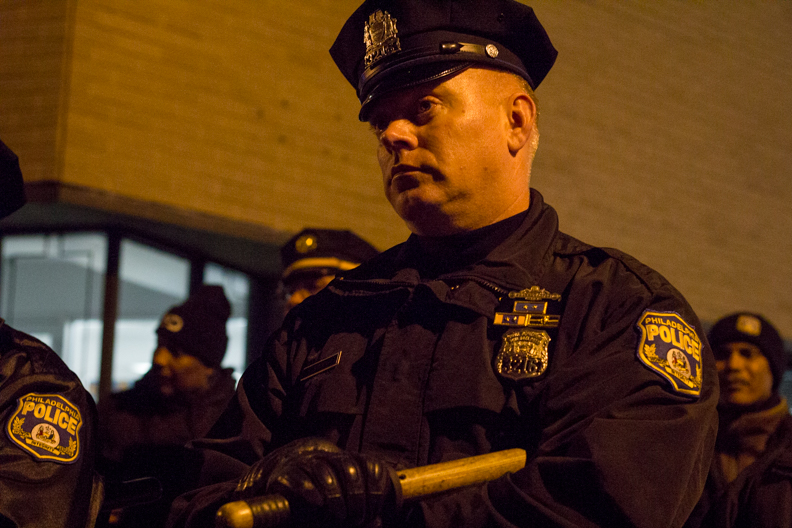 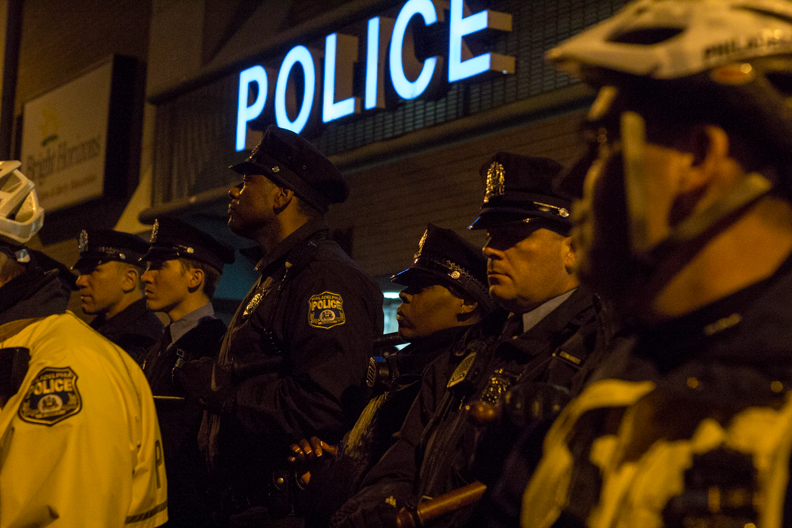 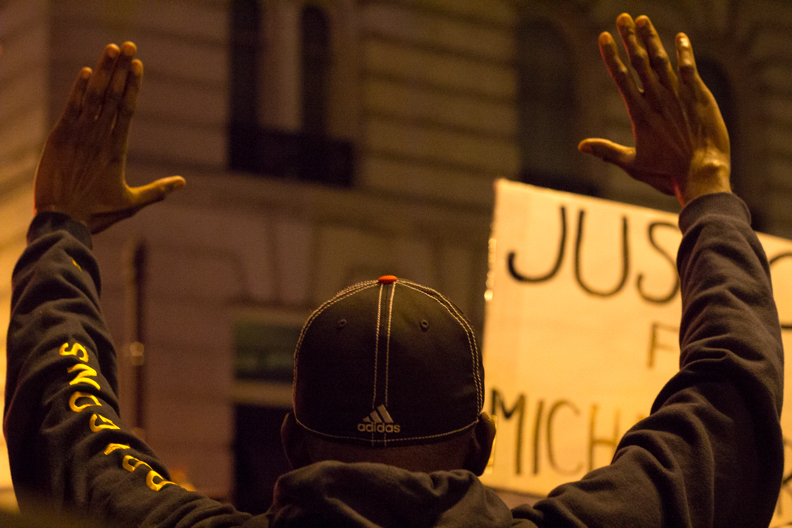 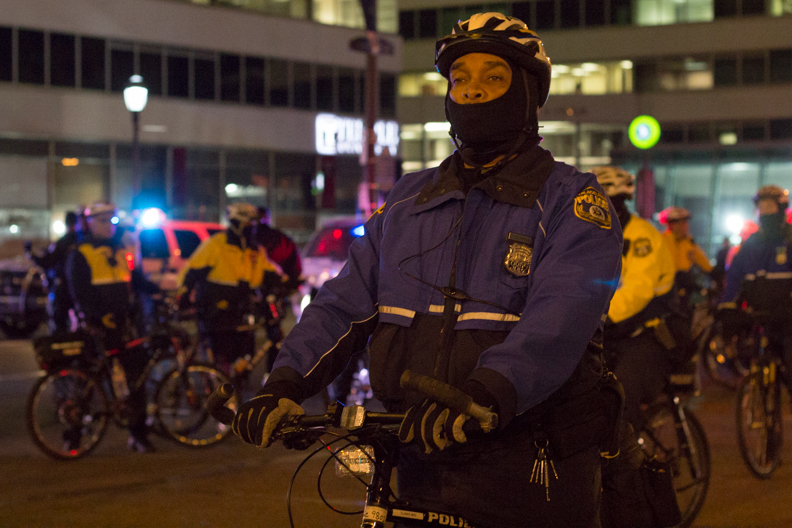 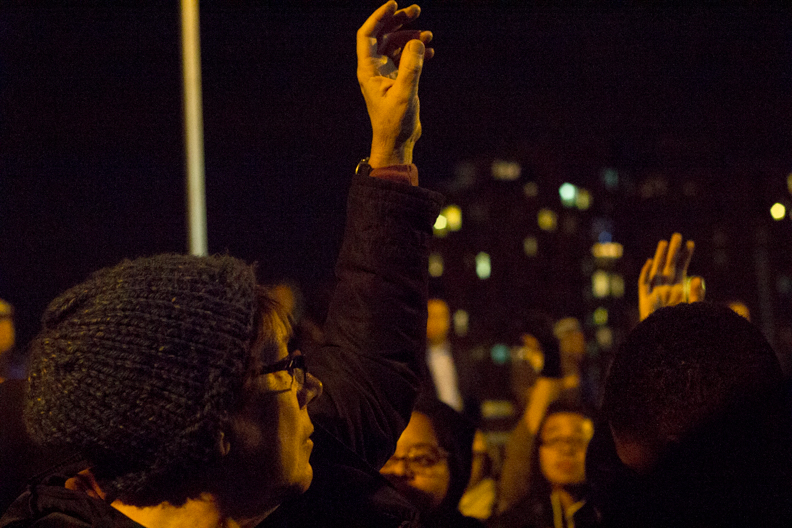 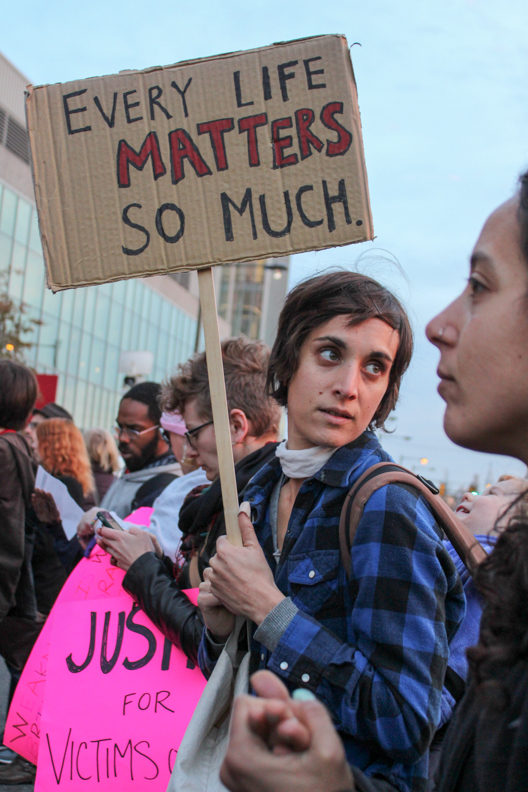 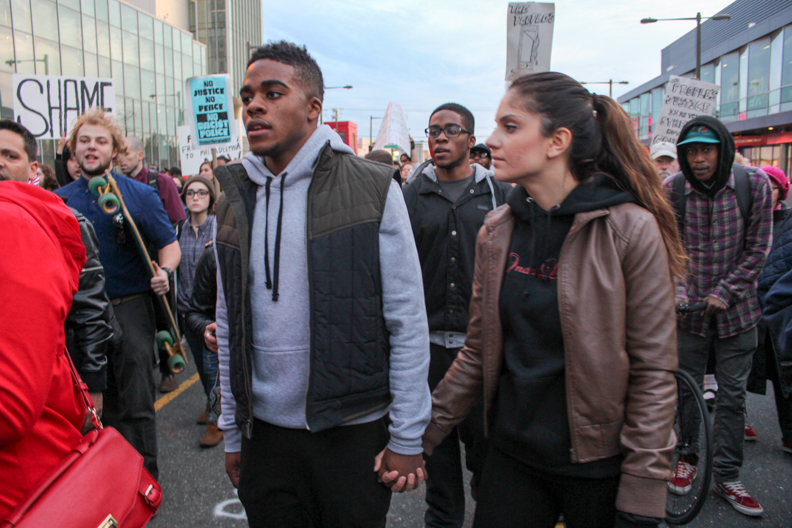 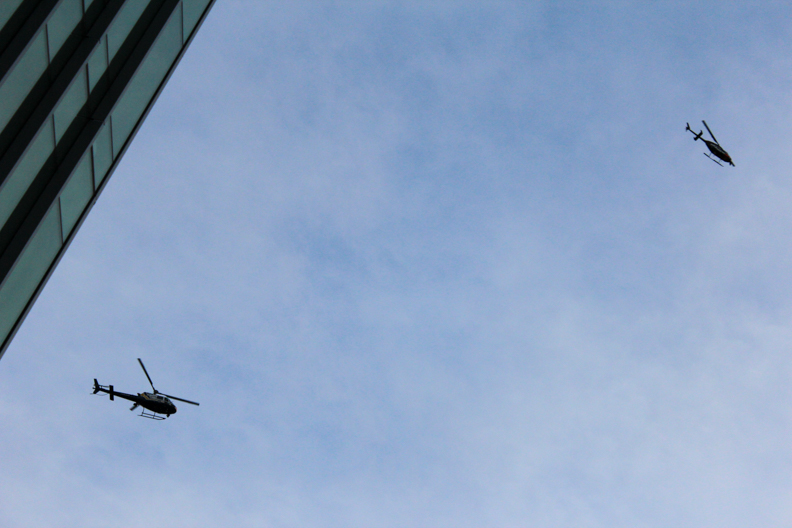 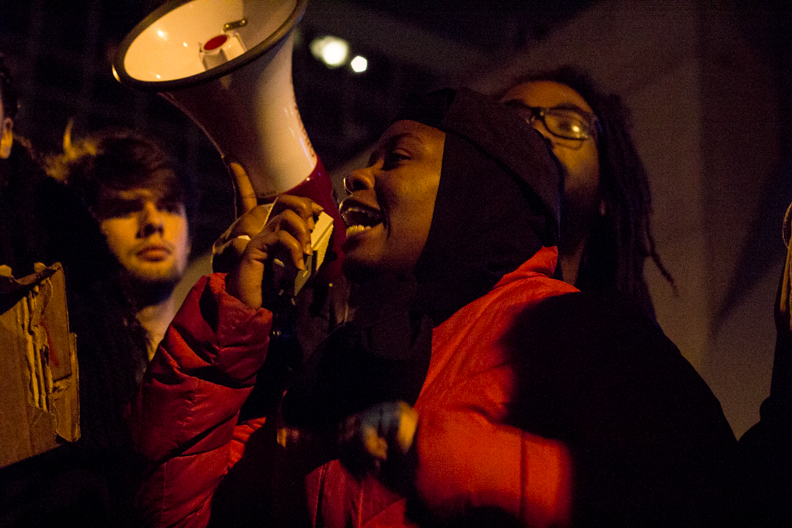 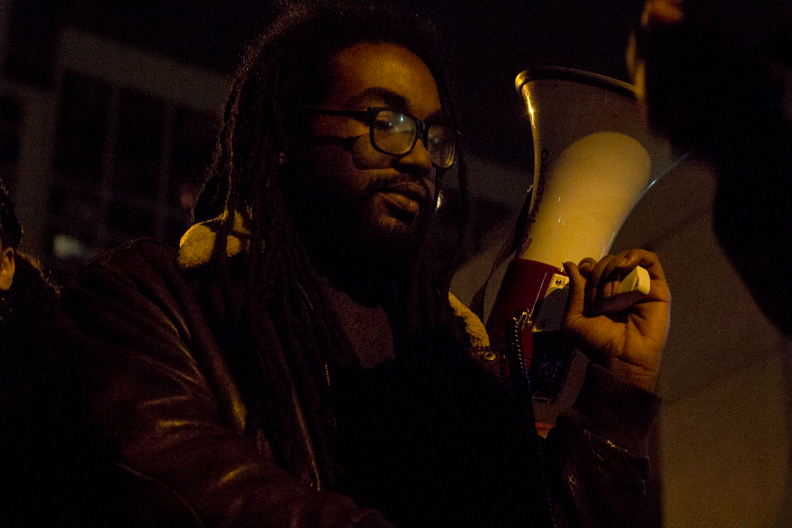 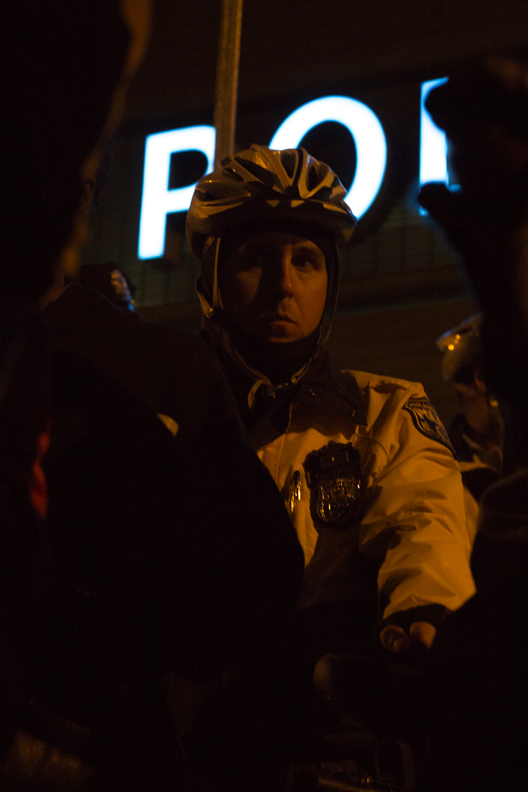 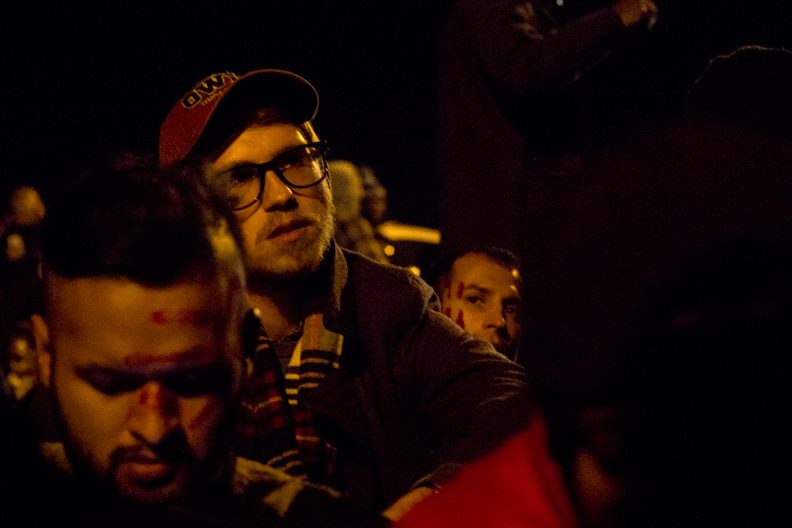 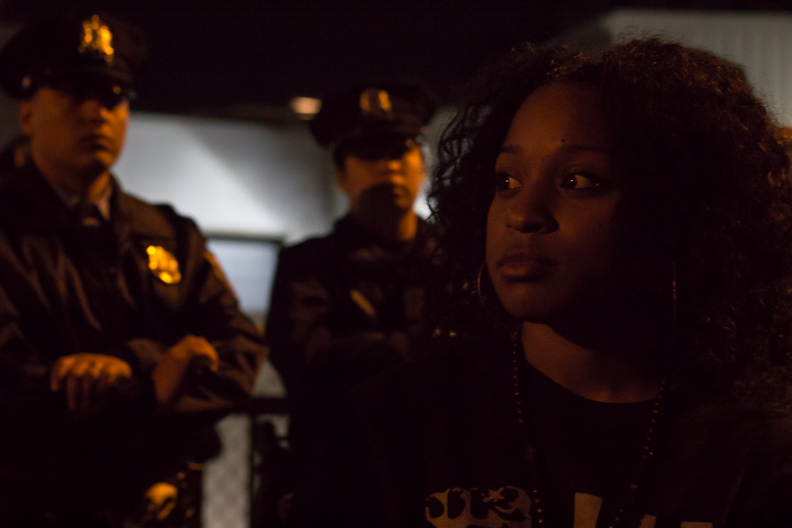 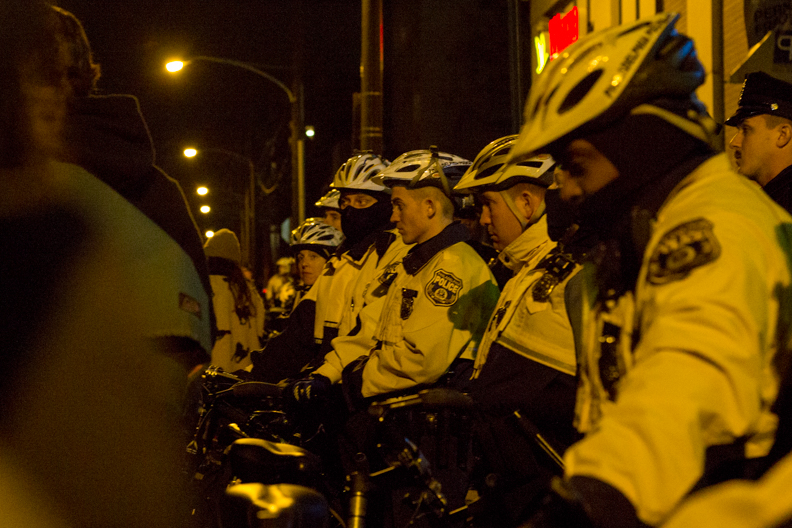 The protest continued south on 21st Street, spilled into the Fairmount neighborhood. Onlookers quickly pulled out cellphones and began to snap photos at the surprise protest that would eventually stop traffic on Fairmount Avenue.

The protest came to a halt in front of the 9th Police District, where PURP members Felix Nnumolu and Naveed Ahsan were being held. The entrance to the station was blockaded by officers prior to the arrival of the crowd.

The crowd demanded their release, with PURP members reading an additional list of demands. One of the emphasized demands was an investigation into the shooting of Michael Brown by the U.S. Attorney’s office.

The two young men were released shortly after 9 p.m. and were overcome with shock by the presence of the protest outside the police station.

The time between the arrival of the protestors and the release of the two young men was filled with personal testimonials of racial oppression and police brutality against minorities.

“Stop killing black people,” said protester and gentrification documentarian Verdis Collins. “I feel like we are raising awareness but as far as actual progress that is going to be made, I can’t quite say.”

With the exception of one heated exchange between what appeared to be a plain clothes police officer and a few protestors, the crowd remained peaceful. Some crowd members, however, repeated obscenities towards the officers that blockaded the station and seemed to break into smaller factions prior to the release of Nnumolu and Ahsan.

“It’s more about people being concerned about their own causes, than rather cause that’s actually being rallied for,” said Collins. “People want an excuse to go out and be loud but they don’t necessarily support the cause. They’re just using it as excuse to basically go out and show their ass.”

Following the release of Nnumolu and Ahsan, fellow PURP activist Paul Winston Cange rallied the protest back toward City Hall.

“I know we’re not tired,” shouted Cange through a megaphone. “Now it’s time to take to the streets.”

The chant of “the people/united/will never be defeated” repeated through the crowd as they marched down the Ben Franklin Parkway, past City Hall and onto South Broad Street.

The protest proceeded to the intersection of Broad and Walnut streets, where bicycle officers formed a blockade. On the previous day, the protesters were blocked in the same manner. On this day, they would not be denied. Protesters walked through the officers with arms raised in the air yelling, “Hands Up! Don’t Shoot!”

“It made us feel so empowered,” said Cange about breaking through the police blockade. “The power is still in our hand regardless of what the police do.”

As the protest moved through Center City, their numbers grew as onlookers became active protesters.

“Now they see people standing up and it’s easier for people to join now,” said Cange. “That’s what I believe is happening.”

The protest moved into Rittenhouse Square, where it settled for the evening. Residents of the community spilled into the streets, asking police to quiet the crowd to no avail.

The relationship between the police and the protesters remained civil, even as the protest remained in the park after 10 p.m., the time at which the park technically closes.

The rally in the Rittenhouse Square lasted until around 11 p.m., when pizza arrived and slices were traded for email information so activists could be added to PURP’s email list.

“I think it ended really well,” said White. “I think it’s important to remember that it didn’t end in violence.”

The Waterfront: Fishing on the Schuylkill River

The Schuylkill River runs throughout Pennsylvania and can be noted for some great chances to fish. But when it meets the Delaware in the urban environment of Philadelphia, one might think that chance to fish [Read More]

Just a few years ago, vegetarian and vegan food options in Philadelphia were mostly found in the grocery store aisles. But over the past few years, the city has seen an explosion of new restaurant [Read More]

Germantown: Engaged Citizens Spend Another Evening With The Captain