Johnathan Stewart is the head coach for Play Hard Squad (AAU Basketball) and a residential advisor at Girard College in the Sharswood section of the city. We spoke with the 45-year-old about the role of basketball in the city. 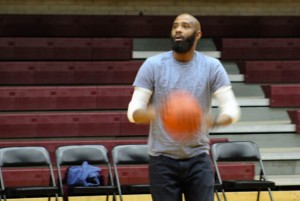 How long have you been a coach?

I have actually been a coach for about 10 years now.

What age group are you currently coaching?

I’m currently coaching eighth grade in which all of my kids range from ages 13-15 years old.

What lead you to become a coach?

I’d say that after observing how these guys [AAU Coaches] were doing these children , I just felt as though that you needed some people involved with these young men that had a little substance in what they were doing. I felt as though that the AAU circuit was filled with a lot of people that were coaching children for their own personal gain and not for the kids personal gain.

What are the challenges for coaching a young group?

Really, the challenges of coaching a young group actually come through the parents –   having children to practice on time and games on time. Just following the basic rules of my AAU program, I run into issues with the parents. But as far as the kids go, I would say with this age group, the hardest thing is just keeping these guys focused. You know 13-14-year-old’s? They’re silly. They got their focus on girls. But for the most part, if you keep driving in their side what they need to do they’ll get it together. Focusing the kids is the hardest thing. 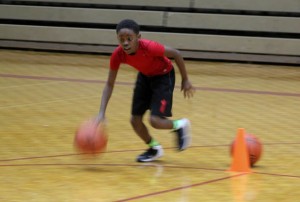 How do you keep the team disciplined?

Running. We do a lot of running in practice, which when they don’t do things right and they run they kind of link the two things together. So the constant running brings discipline to the team. If you play for me, you got to be in the gym at least three times a week without me. I’m impressed with this young group.

How important is education to the team?

That is the most important piece of the team. I tell my kids, “You know if you have high schools interested or when you get in high school and you have colleges interested, it means nothing if you don’t have the grades.” So education comes first. That builds the foundation. That helps with the discipline because if they’re disciplined enough to do their work, they’ll be disciplined on the court as well. I got them operating like a college team.

As a head coach, what is your ultimate goal?

My ultimate goal, as a young coach, is to teach these young men the proper way to live and to make sure that what we’re doing has some integrity in it. I don’t want anybody to look at my program and make false accusation or assume. I want people to be able to view what we’re doing and know that were doing good things for these children. But the ultimate goal would be to get every last one of these kids a free college scholarship. Whatever they get from there is just a blessing from their lord. 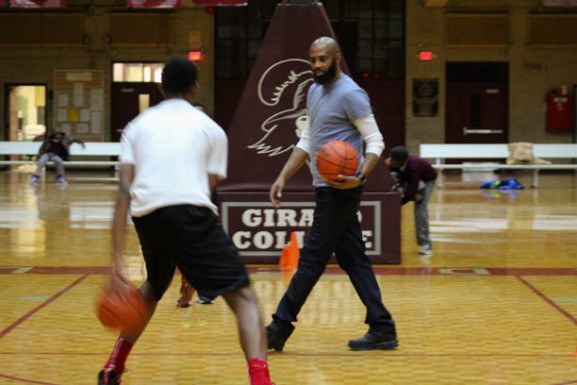 A few weeks ago, Lakers guard Kobe Bryant made comments in regards to the development of players coming up  in the AAU compared to those who develop their talent overseas.  What are your thoughts regarding Bryant’s      comments?

I totally agree with him. The problem that I view in the States is that these children are not fundamentally sound. A lot of these kids can go up and down, they can one-on-one you to death. But when it comes to the fundamentals of the game, it’s obvious that our kids are lacking that. That one of the reasons why i believe that within the next ten years we might see the NBA flip, where the NBA might be full of foreign players and the foreign leagues may be full of Americans. That’s just because the fundamentals are just not there.

– Text and images by Vincent White and Scott Weiss.

Dorian Vasquez and Setoiyo Ekpo are both Philadelphia-based comedians by way of Columbus, Ohio. Each giving back to North Philadelphia residents in their own way, they just happen — by coincidence — to be helping [continue reading…]

Joe Messina loves the art of pitching. Involved in baseball in South Philadelphia for the past quarter-century, Messina has been an assistant coach for the Neumann-Goretti High School baseball team for the past 11 years. [continue reading…]