Loyal customers know that Fresh Donuts owner Donald Eap and his sister Van have owned the doughnut and breakfast shop at 39th and Lancaster Avenue in Mantua for years. The neighborhood has changed significantly since they opened the doors back in 1991.

What changes have the Eaps seen in Mantua?

“Now it’s more like upbeat,” explained Van. “Before it was scary for people to come by.”

The most notable change is the influx of college students to the area.

“There’s a lot of Drexel kids,” said Donald. “About four months ago, they came in for a school project. They were interested in business.”

The four students came into Fresh Donuts a few times a week and saw what it was like to run their own store. To spruce up the shop’s front, they designed giant paper doughnuts to hang from the ceiling. 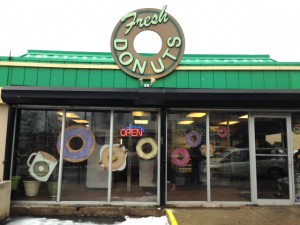 How do the Eaps encourage community involvement?

A bulletin board with an array of neighborhood business cards and some Drexel University events are arranged in front of the bakery cases.

Donald said he put that up so more people can know what’s going on around the neighborhood. The board is helpful to customers as different people continue to move into Mantua, especially the college students who are often only in the city on a temporary basis while they go to school.

He uses the board himself to stay connected to what’s going on in Mantua since he moved out of the area back in the 1980s and into Upper Darby.

“It got really expensive here and they drove the prices up,” Donald said.

Even though the owners no longer live where they work, they’re still just as ingrained in the community. Every summer they take part in the Lancaster Avenue Jazz and Arts Festival, and also donated food to the “free hair day” for homeless men and women at the nearby La Pearl Beauty Emporium this past March.

On a daily basis, the Eaps spend more time in Mantua at their store than they do in their own town. Fresh Donuts is open from 5:30 a.m. until 5:30 p.m., but once Donald locks up the front door, the real work of making the doughnuts begins. 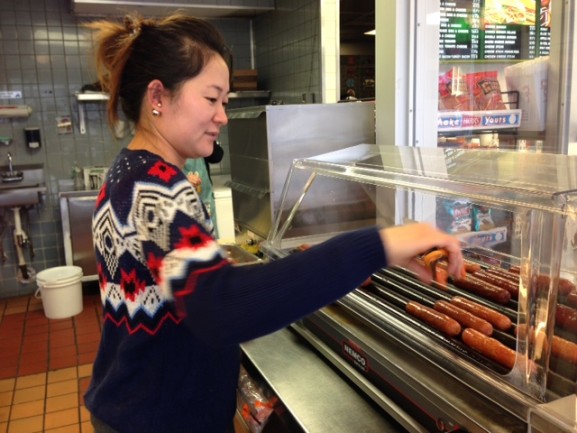 What is the dynamic between the Eaps and their employees?

“He’s a good boss, he works hard,” Bunauoy Chen (above), the cashier at Fresh Donuts said of Donald. “Our families were all [friends] from our homes in Cambodia. We’re all friends and family here, too.”

Donald and Van taught their employees how to make the doughnuts every night. It’s a process that takes a lot of time, as all the cake doughnuts are made from scratch and have to be cut and eventually iced after they fully rise. This is where the “fresh” in Fresh Donuts really comes in.

How do the Eaps manage to keep prices low and stand up against commercial competition?

“We’re not scared,” said Van. “We make our own doughnuts – we can afford a better price.” 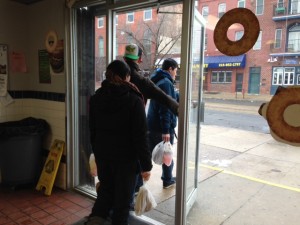 Van admitted they weren’t always that business-savvy. They grew up making doughnuts but had to make some changes to their strategy over the years.

Van said that when they started, there was “no business at all.”

They saw gradual improvement, but the little store really took off in 2008 when they started offering breakfast sandwiches.

Today, as veterans of the breakfast business, the brother and sister duo continue to bring in their regulars as well as new faces from the ever-changing backdrop of Lancaster Avenue.

Text and photos by Chelsea Lacey-Mabe and Lera Salmon.

Olde Kensington is a close-knit community with a thriving arts and culture scene (watch out, Fishtown). On every street you will encounter anything from an art recycling center to a monstrous exhibition hub. Want to [Read More]

Branon Gilmore makes enrichment for youths and adults in the Mantua area his priority every day when coming to work in the morning. Gilmore, 44, is the Center Director for the West Philadelphia Community Center on [Read More]

Colored patio sets occupied by chatty groups of people line the block in front of the Market Street side of 30th Street Station. What was previously a parking lot became a success story after its [Read More]