The Roman Catholic boys’ basketball program is one of the most prestigious in the Philadelphia Catholic League. Last season, the Cahillites won the Pennsylvania Interscholastic Athletic Association 4A boys’ basketball championship. However, following the season, several of Roman’s key players from the PIAA 4A championship team graduated and head coach Chris McNesby resigned to spend more time with his family. But with 27-year-old coach Matt Griffin at the helm this year, Roman Catholic won 18 of its first 20 games. 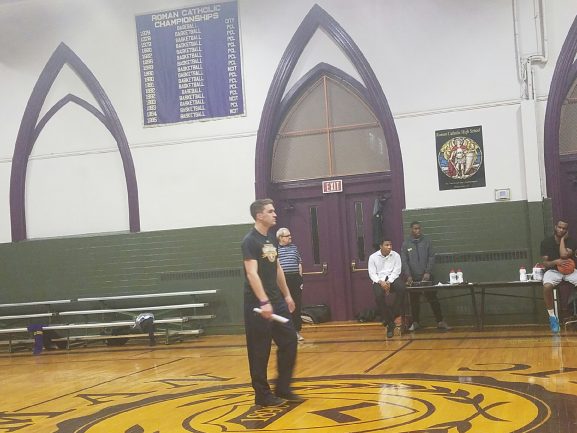 How does it feel to have your first head coaching job?

It’s funny. It feels natural to me because as a basketball player, as a point guard, I was a coach on the floor. I played Division I basketball at Rider University and Boston University and I was a captain so I was an extension of the head coach on the floor. When I graduated, I became a teacher. Essentially I was the head coach of my classroom and I coached at the high school level and the middle school level. Now, as a first-year head coach it feels great to be here, but I’m learning every single day, getting better every day. But I think it feels like we have a lot of potential.

You are very familiar with the Catholic League and Philly hoops from your time at St. Joe’s Prep as a player and assistant coach. What can you say about the rich basketball tradition here in Philadelphia?

Second to none. Philadelphia basketball is the best around. I think we have probably the best league in the country, one of them at least. So it’s a special tradition and it’s one that I’m so grateful to be a part of and to have played in and experienced. The games are so competitive, the coaching is incredible and the players are terrific which creates a very exciting atmosphere to be a part of. Every game is just so difficult and so challenging and so hard to win, but the tradition is to second to none.

What did you learn in your time playing for and coaching under St. Joe’s Prep head coach Speedy Morris? 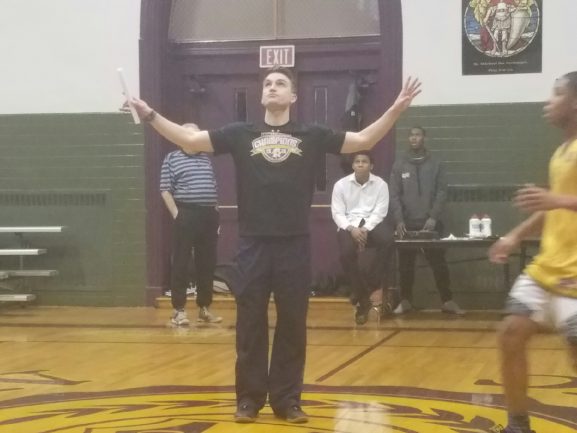 How about your dad since he coached the men’s basketball team at St. Joseph’s University?

Yeah, and my dad too grew up in the game. He was coaching at St. Joseph’s University from the moment I was born until I was six years old. I was a ball boy from a young age and I was around the game early. Growing up in a basketball family, I picked up on so many things along the way and he’s got a ton of basketball knowledge and insight and experience. He’s always been willing to help me and over the years, I’ve learned so much from him.

Did you have any communication with coach McNesby about what things were like here at Roman upon taking the job?

Oh, yeah. He’s been extremely helpful to me this year during the transition period; I know I have huge shoes to fill. But he’s been so gracious to come back every once and a while, offer advice on both the basketball side of it and the administrative side of coaching and help with anything that I possibly need. 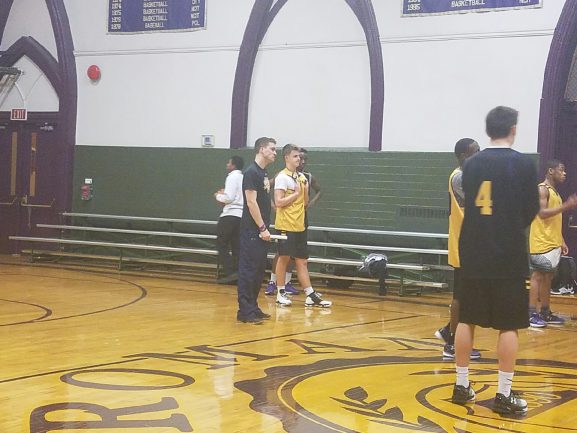 What is it about developing your kids not only into good basketball players but good men that intrigues you?

Coaching is the same reason I got into teaching. I got into a program called Teach For America because I wanted to make a difference and an impact on kid’s lives. I taught math and I wanted to teach everyone how to work hard, be prepared and things that are going to help them later in life. Basketball is just teaching life through basketball, it’s just a different subject matter. I can use basketball to teach preparation, being on time, working hard, commitment, sacrifice, things like that. Ultimately, the lessons I’ve learned through basketball have helped shaped me and helped guide me in the real world. That’s what I am hoping to do for these kids going on from high school to college and having the knowledge they need off the court, as well as on the court, to be successful young men.

-Text and images by Gregory Frank and Chris Stewart.

As Lynn Greer III warmed up in the layup line before Roman Catholic High School’s game against Neumann-Goretti just over a year ago, the freshman felt pain he never suffered before. When he landed, Greer’s [Read More]

North Philadelphia: Andy German of The Prep Says, “It All Comes Down to Coaching.”

Andy German is about to begin his first season as the head coach of St. Joseph’s Prep’s lacrosse team. He was hired in October, replacing Eric Gregg, who stepped down after a six year tenure. Prior [Read More]

Tucked away in Northeast Philadelphia behind Fox Chase Elementary lies Fox Chase Soccer Club. From the outside, it might not appear to be much – a red and white concession stand that doubles as a [Read More]