On Sunday mornings at St. Maron’s Church, congregants listen as Father Vince Farhat leads the liturgy, and afterward congregants come to the church hall for coffee and pastries.

St. Maron’s has existed in South Philadelphia as a spiritual haven for Middle Eastern immigrants since the latter half of the 19th century and is currently made up of about 100 active families. Farhat said the congregation is made up of many immigrants and refugees who come to church each weekend, not only to practice their faith but also to hear their native language and to connect with others who have similar experiences.

The Maronite Catholic Church, which has roots in Lebanon, is headed by the Patriarch of Antioch — currently Mar Bechara Boutros Rai — though the church still ultimately falls under the jurisdiction of the pope in Rome.

Farhat spoke about what it’s like to be a spiritual leader for people who’ve often left behind traumatic events in their home country to build a new life in Philadelphia. 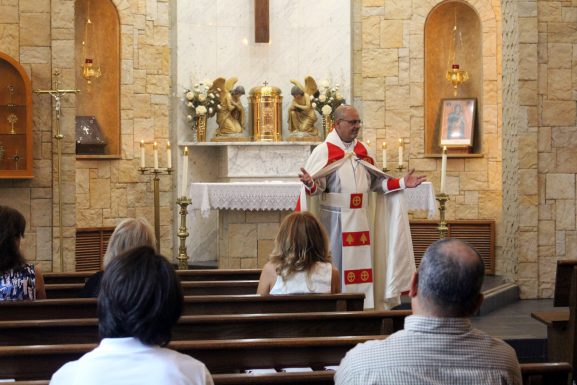 What is the Maronite Rite?

The Maronite Rite is an Eastern Catholic tradition that originated in Lebanon by a monk by the name of St. Maron, hence the Maronites, and we are part of the Catholic Church. We are under the pope. We recognize the pope is head of the church, but our patriarch is in charge of everything liturgically and laws and things of that nature all throughout Lebanon and the Middle East.

Here, in the United States and Canada and Australia, outside of the Middle East area, we are subject to the pope for everything except anything that’s liturgical. The Maronite Rite is in the same lines of teaching as a Catholic Church, except we have our own traditions, our own prayers, our own spirituality. And it’s not just opened people of Lebanese or Syrian or Middle Eastern descent, it’s open to everybody as a spirituality. As I said before, we have the same teachings as Catholics. We are the only Eastern Catholic church [that] has never broken away from the pope of Rome, so we’ve always been in union with them.

What traditions are uniquely Maronite?

During our baptisms, we baptize and confirm at that time. The Roman Catholic Church they only baptize, but we have been given special rights as priests to confirm as well. And that’s part of our tradition. [It’s] very similar to the Latin, but with different prayers. And we use incense every Sunday, every liturgy, whereas the Roman Catholics, they use incense on special occasions. It’s just a different tradition, different flavors. 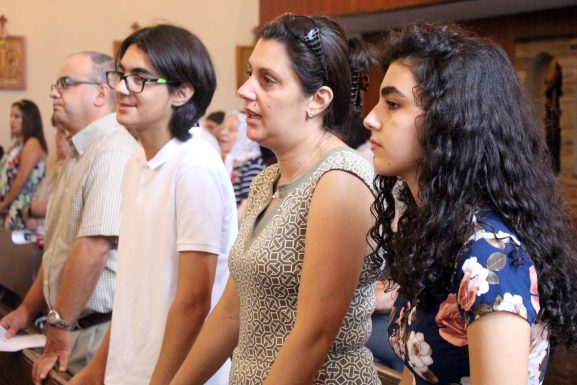 What is the ethnic makeup of the church’s congregants?

The church has been here for 125-plus years. So at that time most of them were from Lebanon, immigrants that came from Lebanon. Especially in the recent years, with the wars in Iraq and the wars in Syria and everywhere else, our community is made up of Jordanians, of Syrians, of Iraqi Chaldeans, Palestinians, all of those Middle Eastern countries that especially have been involved in wars. The first thing they do when they come to this country, or whatever city they go to, is they look for the first church. So our community is made up of all of these people from different countries in the Middle East.

We are also open to people who aren’t even Middle Eastern. We have Italians who come, even on Sunday when I’m doing the liturgy in half Arabic [and] half English. For certain parts of the mass we use Syriac, which is a dialect of the language that Jesus spoke. And they have found a home here that they love the spirituality of our mass, they love the prayers of our mass. So they come even though they don’t understand everything I’m saying, they can see it in English. Especially over the past five years I would say, we’ve seen a greater influx of immigrants coming fleeing the wars. We have a lot of young families who emigrated from Lebanon, who were born there, who have come to this church, come and settled down in this area. So it’s a very interesting makeup here. And everyone is welcome and they know that. 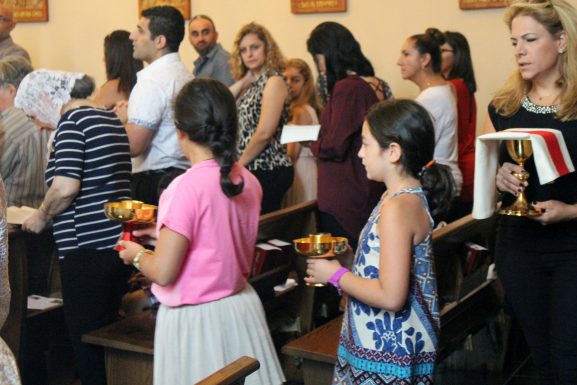 Some of the people here in the church are fleeing circumstances that are really traumatic. How does that impact your work as a spiritual leader?

Most of the people in my congregation have dealt with this in one way or another. In Lebanon in the ’70s, they had the civil war and they had the wars continuing, and they still have them now but not as often. So they’ve all dealt with this conflict of war-torn countries. Sometimes our people have become numb to war because they’ve become so accustomed to it. But even now we still have many of our parishioners who were in the civil war, who still have been scarred from the effects of it. And ,yes, they look for some spiritual guidance and help. And it’s challenging for me because I can’t explain to them why this is happening over and over and over again. But they seem to find some peace and solace here. And they’re around people who have experienced the same things and they can talk about it and they can deal with it and they can pray about it. So this church, although we serve as a church, it’s also a safe haven for these people. 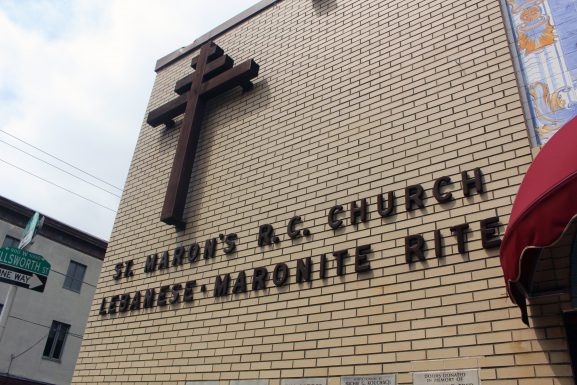 Have you had people coming to the church even more recently who are refugees?

We have [refugees] from Syria and Iraq. We have quite a few Iraqis. We have tried to help them find a place, given them some money to get started, found schools for their children to go to, who don’t even speak English when they come here. And they have excelled in an incredible way at these schools. We help as much as we can. If the church can’t help, I’ll call parishioners up, and say, “Can you help me with this family or that family?” They’re very gracious. We’re a very small community. We’re not like your huge Roman Catholic Churches where you have thousands of people coming in. 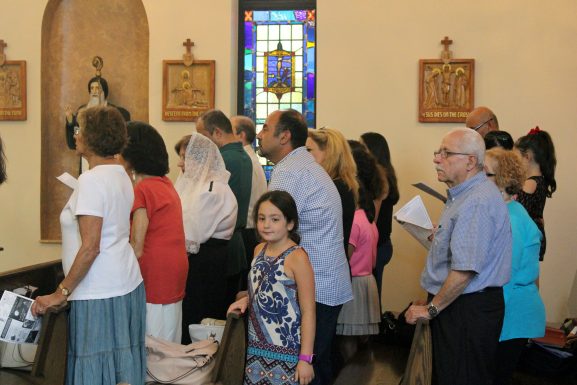 -Text and images by Jennie Roberts.

Walking by the Prince Theater at 9 a.m. on a Sunday and you will wonder, “What are all those lights doing on so early?” That’s because Freedom Church is preparing for their weekly Sunday morning worship at [Read More]

Germantown: A Life Dedicated to Faith

“How many people can say that they work at a place where miracles happen?” said Florence Dellisanti, a buyer for The Shrine of the Miraculous Medal’s gift shop, located at 500 East Chelten Ave. Dellisanti [Read More]