Catzie Vilayphonh, 37, and Michelle Myers, 46, known as the poetry duo Yellow Rage, met and penned their first poem together at a writing workshop at Asian Arts Initiative in 2000. The poem, “I’m a Woman Not a Flava,” expresses the women’s anger over the sexual fetishization of Asian women.

After working on the poem together, Vilayphonh and Myers auditioned for Def Poetry Jam and were chosen to perform at HBO’s U.S. Comedy Arts Festival in Aspen, Colorado, in 2001. Their performance was filmed and aired as part HBO television series “Russell Simmons Presents Def Poetry.” The duo then performed as part of the Def Poetry Jam College Tour throughout early 2003.

Since then, Vilayphonh and Myers have been active in performing their poetry in Philadelphia at multicultural events and on college campuses. Their poetry deals with topics, such as racism, sexism and human trafficking. 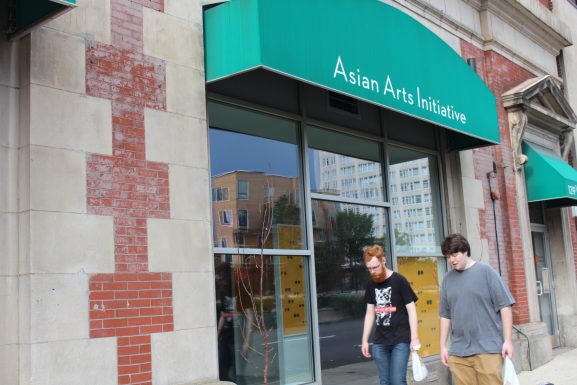 The two are also independent artists and thinkers in the city’s Asian-American community, and their work is often inspired by their own backgrounds. Vilayphonh is a Laotian refugee and Myers was born in South Korea to a Korean mother and a white American father who was serving in the U.S. Air Force.

Vilayphonh is a multimedia artist and creator of Laos in the House, an art project turned community organization, aiming to share the stories of Lao-Americans.

Myers wrote “The She Book,” a book of solo poetry, and serves as an adjunct assistant professor in the Asian Studies Department at Temple University and an associate professor in the English Department at the Community College of Philadelphia. At CCP, she serves as the facilitator of “Drop the Mic,” an Emmy-nominated spoken word competition aired by the student TV station.

What’s the meaning behind the name Yellow Rage?

Vilayphonh: The poem that we wrote together was “I’m a Woman Not a Flava,” and the things that we wrote about in the poem reflected on us being women, but also sort of the stereotypes that we face as Asian women. We thought of Yellow Rage because yellow is a color that’s associated with Asians in terms of their skin color … [but] it was more so like “yellow rage” was more of like the anger that we had as Asians.

Myers: I think it’s kind of an ironic twist on the way the word “yellow” has been used historically against people of Asian descent in the United States. It’s been used as a denigrating term, starting with the influx of immigration, perhaps from Chinese immigrants coming at the end of the 19th century where they were basically calling them the “Yellow Peril,” and saying that…somehow or another that they were going to take over.

And so “yellow” has been used in so many different ways as a racist term, as a denigrating term, as a dehumanizing term. It was used again in propaganda against Japanese-Americans during World War II. We can go through all the various wars that involved Asian people in the 20th century from Vietnam to Korea and so forth.

So I think that the way that we use it, “Yellow Rage,” we’re kind of re-appropriating that word and making it mean something that’s unexpected for most Americans, because usually they see that as a way to keep us oppressed or try to present us in an undesirable way. So we’re saying, “You don’t have to see us as desirable.” We have something that we want to say about all the ways in which we see that we’ve been mistreated whether its current issues or past issues. For me, that’s how Yellow Rage has come to have meaning. 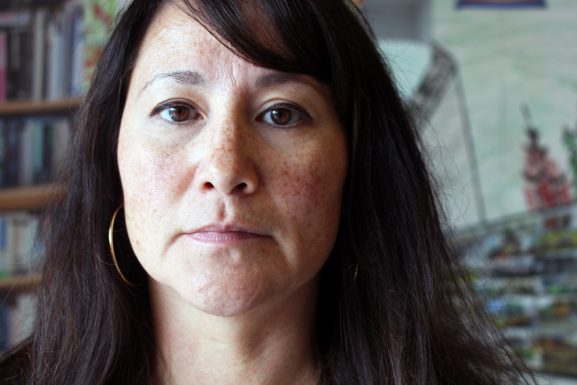 What are some of the misconceptions about Asianness that your poetry challenges?

Vilayphonh: I feel there’s a constant stereotype and then as soon as you challenge it something else happens. The first is that Asians are docile and meek and that they’re kind of pushovers and you can boss them around, or because they’re too busy trying to assimilate that they’ll do anything to get through it. And we come out speaking great English, and we put it into poetry, and so we shatter these stereotypes about the Asian who speaks limited English. And then we come out and our poems are angry and they’re full of curse words and again that shatters the stereotypes of Asians being these meager, defenseless people.

Myers (pictured above): I think that people tend to simplify the way in which Asian people are presented in terms of racial stereotypes. We’ve gotten this over the years, they say, “Oh, what do you have to complain about? Asians have it good. Compared to other minorities Asians have it good. You really don’t experience racism.” All those “good stereotypes” … “Oh, you’re all good at math. What’s wrong with saying that? Oh, you’re all great students and you all get straight A’s. What’s wrong with that?” And they don’t understand that historically and socially and culturally that there has been various ways in which Asian people in this country have been stereotyped.

I think it’s important to remember that when Asian immigrants first came over to the United States there weren’t good stereotypes of Asians. They were seen as being threatening in many different ways, threatening in terms of taking away jobs from white people, threatening the “purity” of the white race in the United States if they intermarried. think that it’s important to remember that there have been and there still are many, many stereotypes and many oppressive laws. 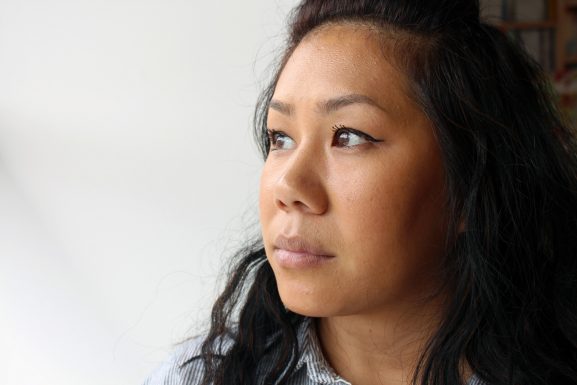 You’re both are working on different forms of art individually now. Do you want to speak to what issues you’re focusing on in those works?

Vilayphonh (pictured above): I feel like mine is very focused on the Lao community, but not so much like, “Let’s talk about our people because you guys don’t know us.” A lot of it is talking to them. Because a lot of communities, when they resettled here, we didn’t have a Laotown, we didn’t have one central place where it’s all of us; we were kind of scattered. Now when we find each other, the community is pretty divided on many issues and it’s hard to talk to people about it. Even when you bring up civil rights, people are like, “Why should I care about civil rights?” Even though civil rights is part of the reason why refugees from the Vietnam War came to be.

The deportation issue — so we have an issue with the Southeast Asian community in which if you have a criminal record, even if you served your time, you [can] be deported. And so many people are split, and they say, “Well, good for them. They deserve it. They did bad, so they don’t belong here.” And some people are like, “Well, it’s not right because some of those people have never even been to Laos. They were born in a refugee camp like me, and they don’t speak the language. And where are they gonna live? What are they gonna do?”

Myers: I think that the work that I do independently kind of falls into three main areas. The first kind of work that I do is really dedicated to cross-cultural, cross-racial community building. In particular, I write a lot of poems in which I do try to bridge this gap of misperception between Asian-American and African-American communities.

And I think a second aspect of my work is a lot more personal. I would say in the last year or so I’ve been writing a lot more poems about my mom [who died in March], and talking about that experience of seeing a parent, your mother deteriorate, and the kinds of conversation and realizations that come. The other personal part is trying to give more attention to the biracial or multiracial identity aspect. I do get a lot of people who reach out to me, who are not only multiracial Asian-American but just multiracial in general, and they talk to me about navigating that space.

And the last thing I would say, is I’ve been writing a lot of poetry too that just talks about being a woman, regardless of what your ethnic, racial, religious, maybe even gender identity background is. If you identify just on a level as being female, what are some of these common experiences that maybe we can draw from?

Do you have any thoughts on why spoken word is a good form for combating some of the issues that you deal with, like sexism and racism? Is there something powerful about that art form to address these issues?

Vilayphonh: A performance itself, the attention is on the performer and you have to sit in the seat and just take it all in. And so I think there’s power in saying what you’re gonna say and people have to hear it all. With spoken word poetry I think it’s more engaging to people because you’re speaking to them. You’re not reading a book or you’re not behind a piece of paper, but also I think too in a way that poetry, for us, we use the language that we normally talk with to say these things. So, we’re not making things hard for people to understand.

But I also think too, when we write emotionally from places, when we perform we go back to it. So my mom, when she saw us perform on Def Poetry Jam, she didn’t understand anything we were saying because it was too fast and her English isn’t that great. But I think she knew from watching our performances like, “You guys are angry about racism.” There’s just something about performing which makes less of a barrier to the content.

Because we write from our experiences we are able to get people to that place, as opposed to reading someone’s work and not really knowing, “Is this a happy poem? Is this a sad poem?” You know what kind of poem it is when we perform and I think having complete control of how it’s conveyed is probably the most powerful thing about it. 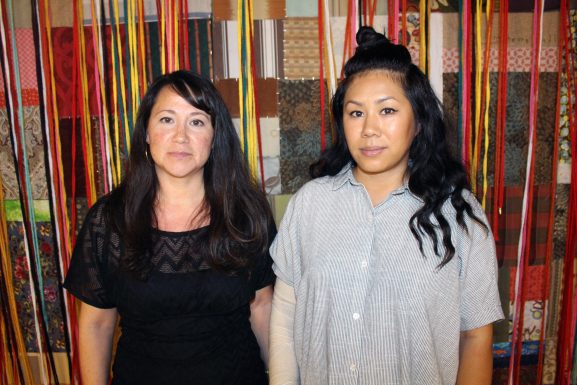 Myers: It’s just storytelling on another level, so I think that people also can engage with it in that way. And when you have the emotional connection to your own work and that is getting conveyed in a very profound way to an audience, when it’s clear that it’s not just words that you’re reciting, that it is something that you’re really feeling and that has affected you, then an audience is going to be affected as well. Then after a show a person comes up to you and says, “I really feel the same way. I’ve had the same experience, and you said it in exactly the way that I would say it, but I can’t get up on stage.” And you have those kind of moments too and you realize that there is a community. That in the moment that you’re performing that, even though you’re alone on stage, you’re really building community. That is so important.

Spruce Hill: The Fuze Connects Community Members Through the Power of Words

On a recent Friday night, big, lantern-shaped yellow lights hung from the ceiling of Studio 34 and cast a warm shadow on intricate paper birds that dangled a few inches below. A variety of comfy couches, love [Read More]

Spenser Colmbs has a bachelor’s degree in advertising and a certificate in neuroscience from Temple University. He has a friendly, honest demeanor that helps make his day job as an insurance agent a little bit [Read More]

Tina Rocha, co-founder of the Cerulean Arts gallery, recently left her job as an architect to focus on the gallery full time, which has been open for 15 years. Located on Ridge Avenue, a corridor [Read More]