A new alphabet book designed to promote insight into immigration was announced Friday, Sept. 14, at the kick-off of Philadelphia’s Welcoming Week, a weeklong event meant to forge dialogue between immigrants, non-immigrants, refugees and native born citizens.

Al-Bustan Seeds of Culture, a non-profit dedicated to raising awareness and teaching Arab culture through language and art, promoted the book, “American Border, Culture Dreamer: The Young Immigrant Experience From A to Z” by Wendy Ewald.  There were 18, first and second generation, immigrant teenagers who served as contributors to define their experiences.

Students worked with Ewald to provide powerful images that resonated with their encounters of change. Megan Madison, public education manager of Al-Bustan, said she hopes the book raises conversations because art is a more accessible route to start dialogue on controversial topics among youth.

“People are more afraid to offend people or they don’t want to engage in a conversation with whom they disagree with for fear that it might bring controversy or conflict,” Madison said. “If you bring them together with art, you humanize them.”

Joseph Fuentens, an Al-Bustan youth member who contributed to the book, said he chose the word for the letter G. G stood for “green card” in the alphabet book.

“In Spanish it’s called the ‘tarjeta verde,’” Fuentens said. “So I told my parents’ immigrant story as well as helped with a lot of the pictures, lettering and design.”

The previous year, Al-Bustan produced the same immigrant alphabet, but as a public art installation. The art hung at the Municipal Services Building, from September 2017 to July 2018, and evolved into this year’s book. Madison said this book is an effort in making people feel comfortable and supported noting that we are all human and have a common interest in wanting to be happy.

“We all have something that connects us to each other,” Madison said. “If we just share a part of who we are with someone else, then we’ll find something that brings us together.”

Welcoming Week is sponsored by Welcoming America, which works toward creating inclusive communities and helping everyone feel as though they belong. Welcoming Week in Philadelphia was brought together by several sponsors including Philadelphia’s Office of Immigration Affairs. Symbol Lai, deputy director for the office, said this is a time for people to build trust with one another.

“I think there is a lot of fear, a lot of xenophobia, and racism,” Lai said. “I think there needs to be impulses to turn that inward because there are so many different sides of it.” 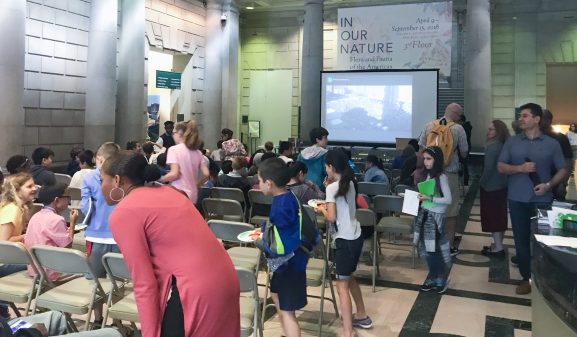 Students were invited to the Parkway Central Free Library to have a Q&A with contributors of the book at the kick-off of Welcoming Week. Fifth graders from Julia R. Masterman School were in attendance for the program. Megan Ballew was one of several teachers who brought their class to the library.

“This was a great opportunity for the kids to read this book about the importance of immigration,” Ballew said, “and about how people come here for a better future.”

This is not the first of Philadelphia’s initiatives in the topic of immigration. Several community partners in the city participated in Welcoming Week and Lai noted how the city is a huge platform and can potentially change the cultural norms in intimate settings.

The alphabet book is available for pre-order and is set to be released Oct. 16, 2018. It will be distributed through various platforms including Barnes & Noble, Hachette Book Group, and Amazon. Welcoming Week will run through Sept. 24 at several locations in Philadelphia.

-Text and images by Nichole Currie.

In the corner of Snyder Avenue and 8th street in South Philadelphia, Juntos, a local grassroots organization, held a meeting regarding information that angered the local immigration community. A recent report by The National Day [continue reading…]

With the Actual Value Initiative (AVI) raising property taxes throughout the city, many Philadelphia homeowners are wondering exactly why and how this is happening. The main goal of AVI was supposed to be a reassessment [continue reading…]

Center City: A Combination of Philly History and the Latest Technology

A prototype application of augmented reality by PhillyHistory.org is available for free download on iPhone and Android platforms. It allows users to view historic photographs as 3D digital information overlaid atop their current location using [continue reading…]