Former Philadelphia Mayor W. Wilson Goode Sr. was recently honored as protesters rallied against the city naming a street in Goode’s honor on the 2400 block of North 59th Street.

The protests were in response to the decision to name a street after Goode, who as mayor in 1985 directed Philadelphia police to drop a bomb on a row house in Cobbs Creek that killed 11 people and destroyed nearly 60 row homes. Goode himself authorized the use of an incendiary device after tension between Philadelphia police and MOVE members culminated in a 90-minute shootout in the 6200 block of Osage Avenue.

MOVE, an organized black liberation group, clashed with the city of Philadelphia in various incidents more than 30 years ago, but the pain felt from the bombing endures. Among the 11 people killed were five children. 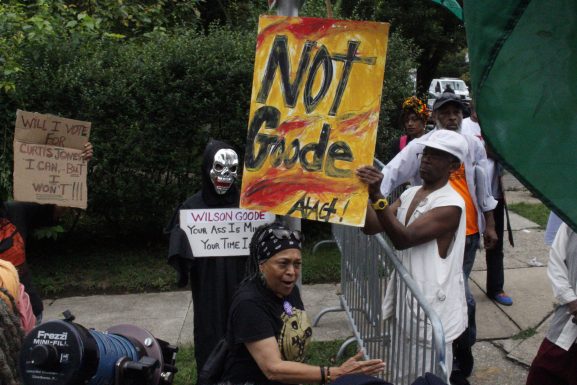 Residents of West Philadelphia, and those who remember the bombing, passionately spoke about how they felt towards the city’s first black mayor. A gate separated protesters from the ceremony. 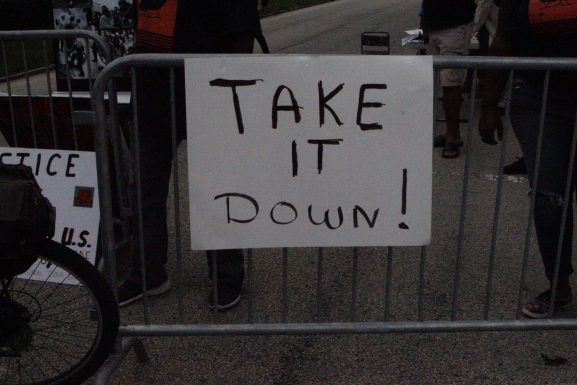 In the video below, local civil rights activist and longtime MOVE member Pam Africa confronts police at the barricade.

“We have to fight harder than we’re fighting now, because it’s one thing after another,” said Jennifer Bennetch (pictured below), a demonstrator who attended the rally with her daughter. “This is a part of a big picture of us losing all our freedom and liberty in this city if people don’t stand up, so that’s why I’m here.” 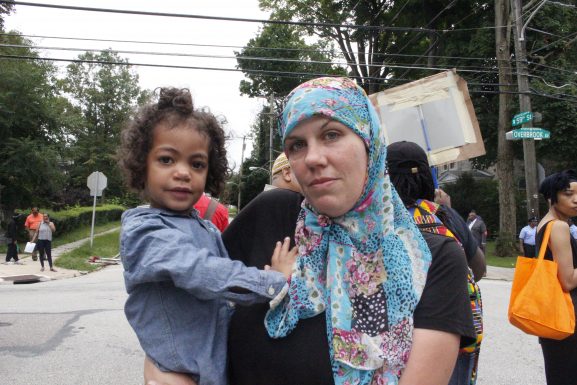 Goode asked the public to judge his entire legacy rather than one instance during his time as mayor, but the protesters refused.

“I accept responsibility,” Goode said, responding to the protesters. “I was mayor that day. You will not define me by one day of my life.”

Current Philadelphia Mayor Jim Kenney and others city officials defended Goode throughout the ceremony, which led to the protesters increasing the volume of their music and using megaphones to shout chants as preachers prayed over the ceremony. 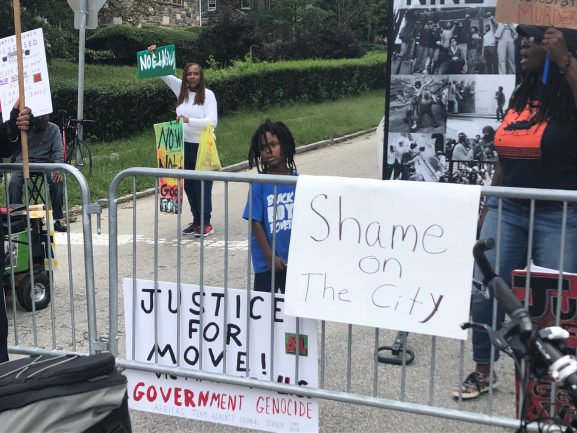 “Obviously the folks are hurting and they have the right to hurt, they have family members that lost their lives,” Kenney said at the dedication ceremony. “I still don’t believe that one day in the eight years of a great term as mayor, [that anyone] should judge his entire body of work.” 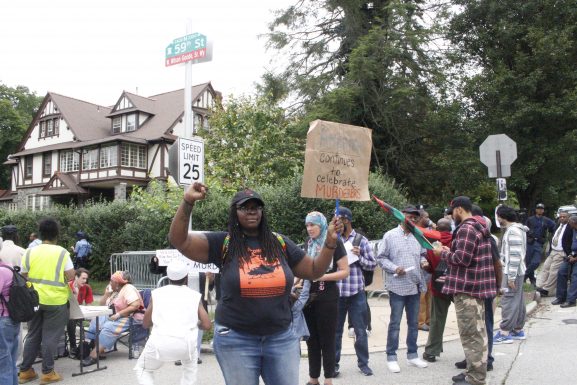 After the ceremony concluded, some protesters separated by gate from the event tried to pass through and were stopped by police. Eventually, after clarifying to police they lived on the other side of thebarricade, local residents like Maisha Sullivan-Ongoza (pictured below), were able to pass through. 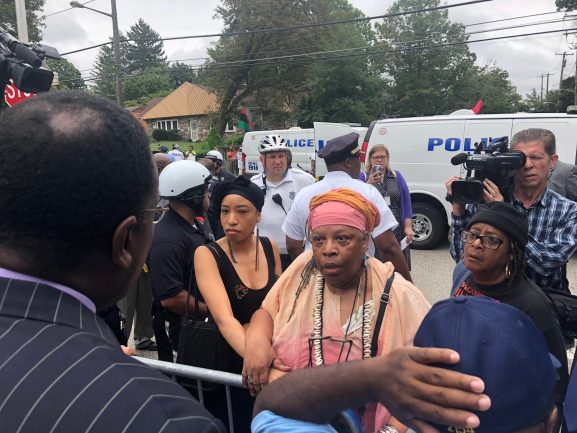 After an emotional exchange with police, Sullivan-Ongoza addressed the gathered media.

“They are over there crying because it brought back memories, unhealed wounds,” Sullivan-Ongoza said of the gathered protestors. “They have post-traumatic stress. They’re still traumatized. How insensitive is that? If we want to resolve it, that’s the best step to resolving it, to remove that so we can come together in a restorative way.”

-Text and photos by Hadiyah Weaver and Toni Dixon.

The plazas surrounding City Hall are enriched with iconic statues. From the 37-foot-tall monument of William Penn at the top of the building to the smaller statues scattered around the base of the structure, these [continue reading…]

The city will host the second annual Philadelphia International Unity Cup , a 48-team regional, World Cup soccer-style tournament, this fall with the final match set to take place at Lincoln Financial Field on Nov. 11. In addition to [continue reading…]

Powelton Village: A Neighborhood In Transition

Usually when a person’s name is drawn from a hat, they gain something. But when Linn Washington had his name called hours before one of Philadelphia’s most controversial events, he almost lost his head. Literally. [continue reading…]