For the past three years, environmental groups from across the city have actively opposed the construction of a new SEPTA gas plant (pictured above) planned for North Philadelphia. They have protested outside the Mayor Jim Kenney’s office and outside Councilwoman Cindy Bass’ office, gathered signatures for a petition sent to the mayor and taken legal action.

Opponents to the plant say it poses a health hazard and is an example of environmental racism, a practice where residents of poorer communities suffer more consequences from large scale developments. 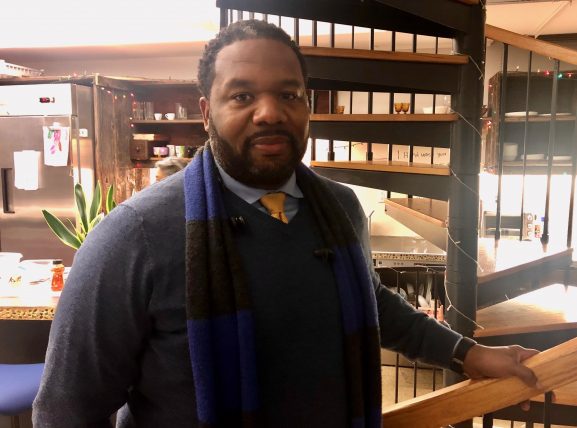 “They need to stop building the plant,” said Patrick Jones (pictured above), a resident of Nicetown. “It’s insulting. We already have a lot of pollution in Nicetown, if not the most in the city. It’s a slap in the face to families like mine who have decided to settle down there.”

There are approximately 37, 300 residents living within a one mile radius of the site according to a 2016 report from the Environmental Protection Agency. According to the same report, minorities make up 93 percent of the population in Nicetown and 56 percent of the residents are considered low income.

“Our community is very tight knit,” Jones said. “We have begun to see a slow crawl to change within our neighborhood and this is a major setback, especially coming from SEPTA, an organization that residents of Nicetown have always supported.”

Despite the controversy, SEPTA is currently finishing the construction on the Midvale Combined Heat and Power (CHP) project at 4130 Wissahickon Ave., located at the border between Nicetown and Germantown.

The gas plant was approved in October 2015 as a part of SEPTA’s award-winning Sustainability Program. The 8.8 megawatt plant was designed to allow the rails to function in the event of a blackout and will cost the city $26.8 million.

Environmental activist groups such as the Sunrise Movement, 350 Philly (members pictured below), Neighbors Against the Gas Plant and The Center for Returning Citizens continue to oppose the gas plant despite the fact that construction is almost complete. 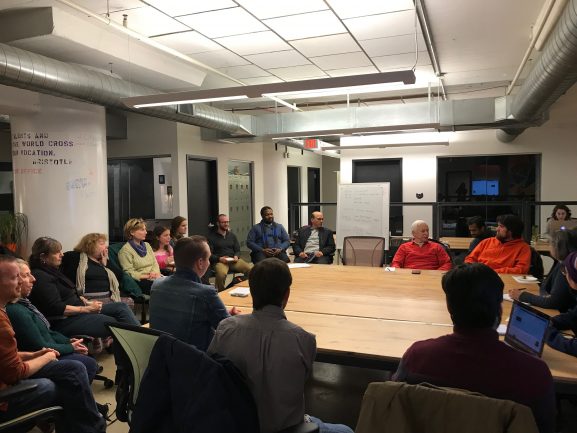 “The CHP plant was designed and is being built using the best technology for the reduction of emissions, and it adheres to all federal, state and local air quality standards,” SEPTA’s chief press officer Andrew Busch said.

A volunteer with Sunrise Movement, Sophia Zaia, has been working alongside the rest of the group of volunteers to block the development of the gas plant or slow its progress.

“We know this gas plant wouldn’t be built in another part of the city like Chestnut Hill or the Main Line,” Zaia said. “We know that this gas plant is going to cause pollution that will harm the people of Nicetown and their health.”

350 Philly is a local group that stems out of 350.org, an organization that uses online campaigns, grassroots organizing and mass public actions to draw attention to clean energy solutions. 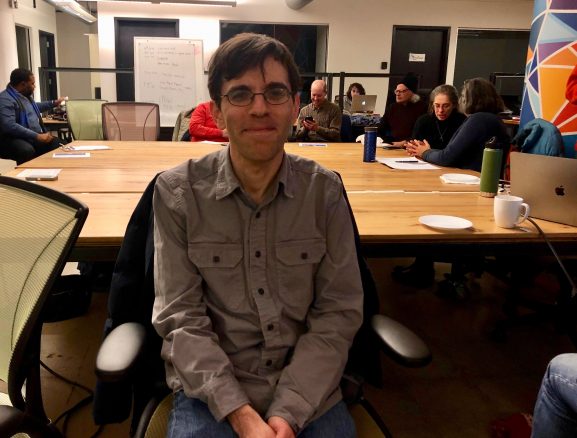 Mitch Chanin (pictured above), 44, has been a volunteer with 350 since its Philadelphia chapter was founded five years ago.

“We are strong proponents for public transit, but we also want it to be powered with renewable energy and not fossil fuels,” said Chanin. “Challenging that gas plant while also pressuring SEPTA to convert to renewable energy was right up our ally.”

Throughout the past seven months, 350 Philly, along with its allies Neighbors Against the Gas Plant and The Center for Returning Citizens, have begun challenging the permit that allowed for the plant to be built.

“We believe that the permit the city gave to SEPTA should not have been issued,” Chanin said. “We believe that it did not properly account for all of the air pollution that would come or the impact it would have on people in the community.”

During 350’s monthly chapter meeting for the month of November, Chanin explained to newcomers what the SEPTA gas plant is and how it is affecting the community.

According to a 2012 report by the Philadelphia Health Management Corporation, about 33 percent of children living in Nicetown suffer from asthma. The national average is 8.6 percent.

Jones, who moved to Nicetown four years ago, worries about the effects of the gas plant on him and his children in years to come, specifically his daughter who already suffers from asthma.

“It is environmental racism,” Jones said. “If you look at where SEPTA puts their stuff, it’s usually in African American communities or low income communities. It seems like wherever they see folks that don’t look like them it’s like, hey let’s build it in that neighborhood.”

In June of 2018, Bass wrote an Op-Ed for the Inquirer opposing the plant. She also accused SEPTA of environmental racism.

“Race is the biggest indicator in the U.S. of whether you live near toxic waste,” Bass said in her piece for the Inquirer.

While Bass’s public opposition of the plant was a win for opponents of the gas plant, both 350 Philly and Sunrise Movement have yet to connect with Kenney. 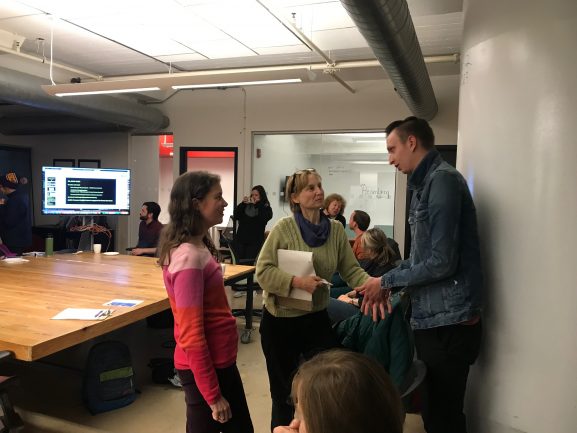 This past summer, Sunrise Movement delivered more than 1,800 signatures from constituents to Kenney’s office only to receive no response. Multiple attempts to meet with the mayor have been unsuccessful.

“Kenney will not face the reality of his actions in supporting this gas plant,” Zaia said.

“He has refused to meet with people many times for the past year and half,” Chanin said. “His response to the public has been repeating the talking points that SEPTA has put forward.”

While silence from Kenney and the start of construction of the gas plant may currently be underway, both Zaia and Chanin are not giving up the fight. 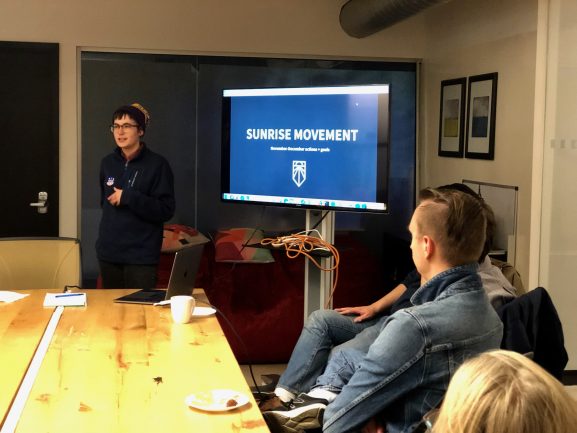 Also during 350 Philly’s November meeting, Audrey Sinclair, a volunteer with the Sunrise Movement (pictured above), encouraged members of 350 Philly to travel to Washington, D.C. with Sunrise Movement and pressure Democrats in Congress to vote with the climate in mind.

“We try to elect climate leaders, people who are going to be climate champions when they get into office,” Zaia said. “We want to get money out of politics and the hold that Wall Street has over our political system.”

“Climate change can’t wait,” Chanin said. “The longer we wait the damage that’s happening is irreparable. For me, even though I care about a whole lot of other things, poverty, violence, war, public education, workers rights, all of that, it just felt like we have fight climate change and we have to do this now.”