On Thursday, Nov. 29, the Mayor’s Office of Black Male Engagement (OBME) hosted its My Brother’s Keeper event which featured a conversation on Economic, Empowerment, and Entrepreneurship. The event was a part of the City’s Community Conversations Initiative, in partnership with Community College of Philadelphia’s Center for Male Engagement, as a platform designed to engage residents and leaders.

For this installment of the monthly series, panelists Quadir Flippen, Nasiar Smith and Jordan Parisse Farrine discussed their experience with entrepreneurship. Attendees also had an opportunity to ask questions about what it takes to start and build their own businesses. 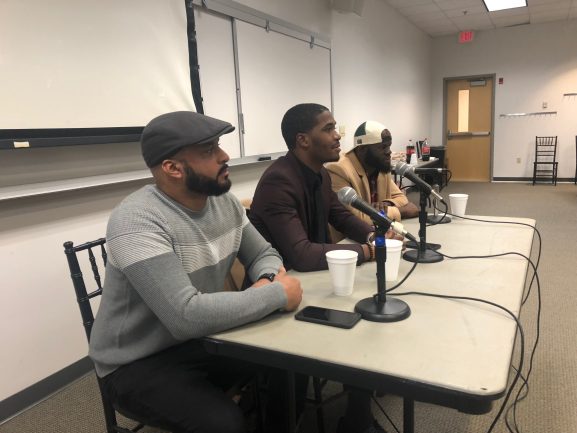 Smith, 23-year-old CEO of People’s Innovation Movement, a nonprofit that teaches financial literacy, said opportunities like these aren’t usually accessible. Many times, he said, blacks and browns have difficulty gaining knowledge outside of traditional education.

“[However], this offers them an opportunity to have a voice.” Smith said.

The panel was organized by Jack Drummond, the director of the Mayor’s Office of Black Male Engagement, who was appointed by Kenney in February of 2016.

Throughout the night, he encouraged questions from the audience in order to help foster the objective of reducing economic and social disparity, a goal for OBME.

Michael Morrow, a West Philadelphia native, said conversations like these are important for the African-American community.

“At the end of the day, these (types) of panels are giving young black men other options.” Morrow said.

– Text and images by Hadiyah Weaver.