There has been an ongoing problem in Bridesburg with traffic for as long as people can remember, especially with trucks and buses because of the depots on Orthodox Street. In recent years, it has gotten worse with the construction of I-95.

However, a Delaware Avenue extension was added last year to give truck drivers an easier route to travel through Bridesburg, Port Richmond and eventually Tacony. Currently, Delaware Avenue extends from Lewis to Orthodox streets. The next step is to extend from the north of Orthodox to Buckius streets.

Trucks are still traveling through the small, residential streets in Bridesburg, making many community members unhappy.

“Many of cars’ side view mirrors have been broken and a sewer inlet at Orthodox and Bath has been smashed over 15 times with oversized trucks trying to make the turn there,” Joe Klecko, a resident of Bridesburg, said. “My mother has lived on the 2800 block of Orthodox for over 50 years and this has always been a big problem.” 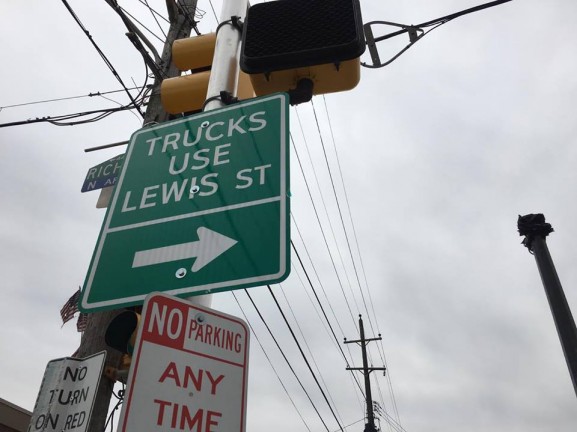 Signs were put up on Richmond and Orthodox streets to let truck drivers know about the alternative route, but residents don’t see them making much of an impact.

“Trucks pretty much ignore the signs since they were put up,” Klecko said. “They need another one coming northbound on Richmond Street at Lewis and one coming off 95 at Allegheny Ave. But most of all, they need to educate the trucking companies and school bus companies of the access of new Delaware Ave.” 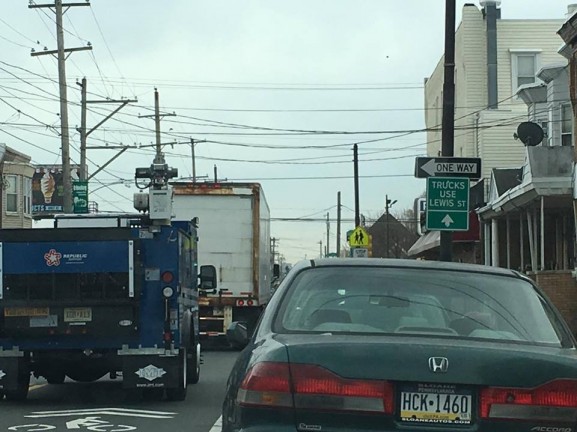 It has taken dangerous incidents for the Street Department to take action. Just before Christmas, an eighth-grade student was hit by a utility pick-up truck crossing the intersection of Orthodox Street and Bath Street.

Resident Daniel Adair believes there are more issues than meet the eye.

“I’ve started petitions in October 2015 to get reduced speed limits on Orthodox Street and Hedley Street and from Richmond Street to the new extension, get speed cushions placed on the intersections of Orthodox and Bath and Hedley and Bath and for truck enforcements to do ‘spot’ checks on these areas to enforce laws pertaining to safety issues,” he said.

Adair also contacted the Streets Department for a traffic study on the 2800 block of Orthodox a couple months ago, but according to the department, the block doesn’t meet their criteria. Therefore, the lower speed limits and speed cushions were denied.

Trucks are much more dangerous than cars and are a big deal when traveling through residential areas as frequently as they do in Bridesburg. According to the Insurance Institute for Highway Safety, or IIHS, “trucks often weigh 20-30 times as much as passenger cars. Truck braking capability can be a factor in truck crashes. Loaded tractor-trailers take 20-40 percent farther than cars to stop, and the discrepancy is greater on wet and slippery roads or with poorly maintained brakes.”

Residents, like Jennifer Allen, just want trucks to use the new extension and routes as much as they can.

“There has not been any significant decrease in the number of trucks and buses since the Delaware Ave extension has been built,” she said. “Anyone who drives through here on a regular basis can tell you we have not noticed a difference, despite the signs being posted.”

The signs seem to be more of a suggestion than a command.

“There’s still businesses in Bridesburg. They’ve been there before the route so we can’t just ban trucks from traveling throughout the area,” chief traffic and street lighting engineer Richard Montanez said. “You can’t stop business from doing business.

“To make the signs mandatory, that would mean no trucks in there, which then means no trash trucks or anything like that,” he added. “Houses won’t get their trash pickup and other stuff.”

However, Montanez offers a solution.

“The alternative is a better way to go and once Delaware Ave is finished, there will be no need to go through the neighborhood.”

“I’ll definitely keep trying to make Richmond Street a no truck thru road after they finish the extension, if I’m still alive.”

Kitty Dior said the turning point for her traffic activism occurred outside of her Mount Airy home on Lincoln Drive and Hortler Street after a horrific accident in May 2007. Dior, a consultant for shops [continue reading…]

While we slowly inch closer to the Pennsylvania Gaming Control Board announcing the location of Philadelphia’s second gaming license, opponents of the five potential locations are making themselves heard. Local real-estate mogul Bart Blatstein’s The [continue reading…]