As the primary election draws closer, the races are beginning to heat up.

The local Republican Party is focusing not on the mayoral race, however, but on the contest for two at-large seats on City Council. With seven candidates vying for the two spots dedicated to the minority political party, Philadelphia’s Republicans are spoiled for choice.

While councilmen David Oh and Dennis O’Brien are seeking re-election, there are five candidates looking to challenge the incumbents. Among those candidates is Terry Tracy.

Tracy, the Ward Leader of the 30th ward, is running for City Council two years after an unsuccessful bid for City Controller in 2013. Tracy believes that his age and experiences help make him a strong candidate.

“I talk about things that Republicans don’t traditionally talk about,” Tracy said. “For example, today I was the only Republican who participated in a Twitter chat on the sustainable economy. I think a lot of Republicans are allergic to that. I think by taking on new and nontraditional subjects for Republicans and presenting how we might be able to maximize their potential for the city makes me unique.”

Tracy has been helping to reform the Republican Party since 2007. He was not alone in these efforts. 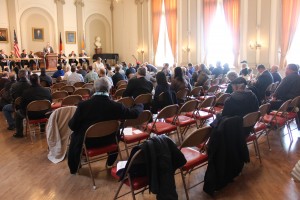 Mike Cibik, the leader of the 5th ward, has been working to reform Philadelphia’s Republican Party for years. Cibik equates the standing of the Republican Party to a sports team – he believes that if you spend years in last place, it is time to change the manager.

“For the last 18 to 20 years, we have been stagnant, if not slipping,” Cibik said. “We attempted to change the direction of the party.”

The Republican Party has been slipping for a long time.

For several decades, the Republican Party had a firm grasp on Philadelphia and its government. The Republicans controlled the mayorship from 1887 to 1952 and saw an all-time registration high in 1948 with 742,230 registered voters. The Democratic Party took over in 1956. Since then, the number of registered Republicans has fallen to 119,290 and the party has yet to win a mayoral election ever since.

Along with lower voter registration, the Republican Party has been struggling to win elections in the city.

In 2014, Philadelphia overwhelmingly elected Tom Wolf as governor. According to the City Commissioners, Wolf won with 87 percent of the vote. In that same year, Robert Brady and Brendan Boyle handily defeated their Republican opponents in their respective Congressional districts. Democrat Chaka Fattah retained his seat despite facing legal troubles.

While the lack of Republican victories is worrisome, some members of the party have another concern.

Despite having two Republicans on City Council, many feel as though those councilmen side with the Democratic majority more than they should.

In 2013, City Council voted to implement a $2 tax on tobacco products in order to provide additional funding for the struggling School District. Councilmen Oh and O’Brien voted in favor of the measure that was not favored by Republicans.

Councilman O’Brien voted in favor for a property tax hike and paid sick leave. Like the cigarette tax, these two initiatives were frowned upon by his party.

The Republican Party has had many setbacks over the years. However, the reformation is far from complete. Tracy believes that the only way to true reform is through competitive elections.

“What the party used to do is treat these two seats reserved for the minority party as the ultimate patronage job,” Tracy said. “You spend enough time working with the party and eventually this was the payoff. I think regardless of the individual incumbents’ track records, if we’re going to talk about serious reform and if we believe competitive elections are the first step to serious reform, then we have to run the five best candidates that we are capable of running and hold their feet to the fire.” 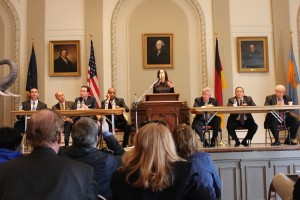 While Tracy stresses the importance of a diverse and competitive range of candidates, Cibik hopes that elections become more centered around the issues.

“The hopes were that we would focus more on issues and be selective in choosing our candidates,” Cibik said. “I think we’re getting a little smarter at that as you saw up in the 170th District.”

Cibik’s hopes may be realized. In late March, a special election was held for the state representative seat vacated by Brendan Boyle after he won election to Congress. Despite the seat previously being held by Democrats, Martina White, a 26-year-old businesswoman, defeated Democrat Sarah Del Ricci with 55 percent of the vote.

White is now the youngest female in the Pennsylvania State House.

White is the new face of a changing party. However, she is not alone. According to Joe DeFelice, Executive Director of the Republican City Committee, the Republican Party has become a home for the young and involved.

“We have been the party that has opened the door for Millennials,” DeFelice said. “We currently have at least five candidates running that are under the age of 40, including our past candidates for city controller and district attorney. We are the big tent party in this city. We have an Asian American Councilman, ran a Hispanic person for District Attorney.”

Martina White’s victory is propelling the Republican Party into the upcoming races. Although the party has its eyes set on a competitive City Council race, reforming the party is an ongoing effort.

Northeast Philadelphians had a lot to say when asked about the upcoming mayoral race. Issues such as education, revitalization and prison reform were all topics of discussion. “Right now you have two front runners that [continue reading…]

It was a quiet and unusually empty afternoon in the auditorium of the polling station at Ridge Avenue and Rector Street. Located right next to the Roxborough Memorial Hospital, volunteers and poll workers were stationed [continue reading…]

The Millennial generation makes up about 31 percent of the voting population for this upcoming election. For this current election cycle both the Republican candidate, Donald Trump, and the Democratic candidate, Hillary Clinton, have voiced [continue reading…]