Originally form Washington, D.C., Colson studied dance at the Duke Ellington School for Performing Arts as well as the prestigious Alvin Ailey Dance Theatre School in New York. Colson also studied at the University of the Arts in Philadelphia, where she earned her B.F.A. in dance education.

In 2006, Colson brought her love for the dance community to Northern Liberties to help educate the youth and offer various dance programs to keep adults and children in shape.

During the past 20 years, obesity among adults and children has risen significantly in the United States. The latest data from the National Center for Health Statistics shows that 30 percent of U.S. adults 20 years of age and older are obese. The percentage of young people who are overweight has more than tripled since 1980. Among children and teens age 6-19, 16 percent are considered overweight. 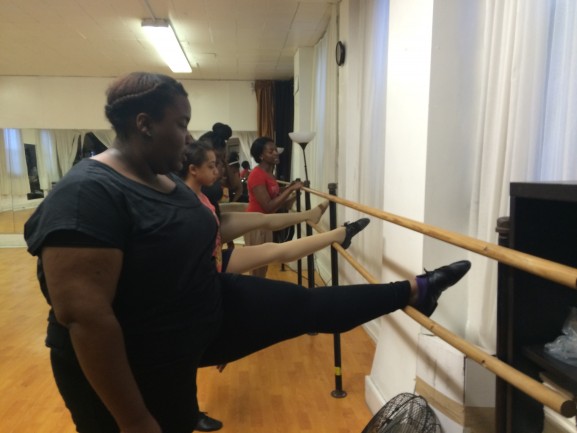 In order to help children and adults maintain a healthy lifestyle, Living Arts offers a wide variety of dance classes including zumba, belly dancing, African dance, ballet, jazz and hip-hop for anyone, from 2-years-olds to adults.

“It’s better to work out while having fun without forcing yourself to go to the gym,” said Colson. “When you’re just dancing, you’re not paying attention to the calories you’re burning but mainly focusing on the fun that you’re having,”

In order to thrive as a successful business against other local dance studios, Colson likes to keep the focus on her studio rather than worrying about competitors.

“You know the saying, ‘When you’re running a race, you never look back at your opponent,’” said Colson. “That’s when you’ll lose focus. Well, that’s how I look at it. In order to better yourself, you’ve got to keep the focus on yourself.”

Colson’s main goal is to educate the youth and keep them off the streets. Colson also offers a mentoring program to help enrich the lives of those who want to better themselves and pushes them in order to become the best dancer they can possibly be.

Tyler Teran didn’t plan on being an artist. During his freshman year at Temple University, Teran hadn’t declared a major and considered studying history. But while taking a class for non-art majors, Teran realized he [continue reading…]

Kensington: A Lot Of Heart Has Gone Into Revitalizing A Community

In the heart of Kensington, one corporation has made it its mission to be a source of hope to everyone, from children to veterans to recently released inmates. The multitude of projects currently in development are [continue reading…]