Saints John Neumann and Maria Goretti Catholic High School has been head coach Carl Arrigale’s only high school basketball home during the time he’s been involved with the sport.

“Neumann is the only place I’ve ever coached in high school,” Arrigale said. “I started as an assistant with coach Mike Doyle and, after he left, I stayed on with the next coach, Tom Dougherty. And after he was done, I took over the program.”

His reason for being involved with Neumann-Goretti was simple: to help in any way he could to make his local school program part of Philadelphia’s basketball lineage.

“I lived in the neighborhood,” Arrigale said. “I wanted to see the school do well and see the program take off.”

Once Arrigale became the head coach in 1999, however, the notion that he just wanted to help build Neumann-Goretti up has since faded because the program has seen one successful year after another. Arrigale has amassed a record of 405-90, which also includes 209 wins in the Philadelphia Catholic League.

Only four other Catholic League head coaches have had more success than him in terms of wins, in both the league itself and in the state of Pennsylvania. Arrigale has put himself in a special class of coaches because of his achievements both in and out of the Catholic League. 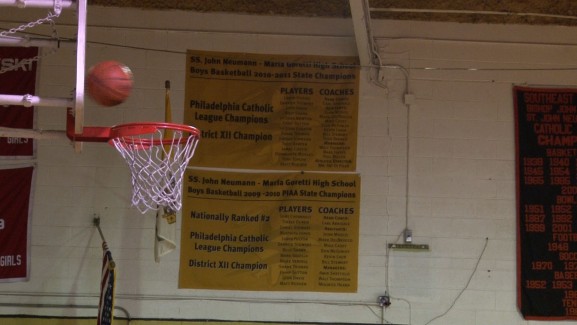 Arrigale won six straight Catholic League championships before losing last year to Roman Catholic and head coach Chris McNesby. The only other coach who has won at least six titles in a row is former Roman coach Dennis Seddon, who retired in 2007 before McNesby took over.

“No Catholic League school has come close to Neumann-Goretti’s success,” said Ted Silary, a former Philadelphia Daily News writer and high school sports record keeper who has kept track of the league since the 1970’s. “Roman long was a top-notch program – and still is, to a large extent – but the Cahillites and other Class AAAA and AAA schools had no full-blown state success until last winter.”

Neumann-Goretti assistant coach Pat Sorrentino attributes the school’s success on and off the floor to the trust and loyalty that make up the program’s foundation under Arrigale.

“Coach Arrigale goes out there and brings the kids in and when they get here he goes through the process of teaching and building them up,” Sorrentino said. “It all comes back to the trust and respect he has for the kids. He listens to them with what they want to do on the floor, and at the same time he’s able to have their trust because they have his.” 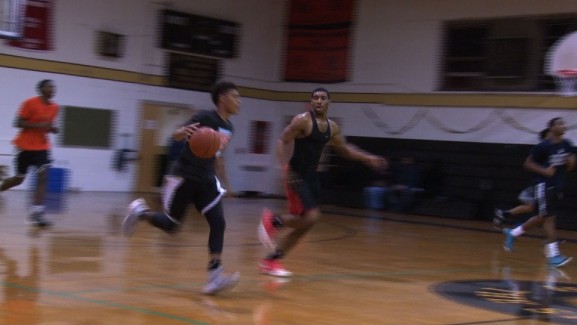 Silary said Arrigale gets the most out of his players. From his outside view, he thinks their success is due to the team’s playing style, which attracts talented players to the school.

“Carl’s coaching style allows the players to play,” Silary said. “Yes, there is structure, but not the suffocating variety. His approach matches up well with what the players will see in college programs. That makes it appealing.”

Despite high-level recruiting and AAU basketball changing the Catholic League, Silary feels that Neumann-Goretti’s consistent winning and Arrigale’s coaching methods have brought a sense of stability to Philadelphia and its Catholic League.

“In an era when players transfer all over the place and programs are in constant flux, Neumann-Goretti has become a model of stability,” Silary said. “Yes, there were some comings and goings in the early years of Neumann-Goretti’s dominance but that trend has faded away. Players and parents know coach Arrigale will look out for best interests and that all judgments regarding the doling out of playing time will be decided by talent/effort/chemistry, not favoritism.”

Whether Arrigale will continue on his historic path of winning in both the city and the state remains unknown, but for coach it’s not only about building a legacy of his own.

“Everyone thinks the games are fun and you win and everyone’s happy,” Arrigale said, “but the challenges that go along with blending personalities – and making sure everyone’s doing their work and balancing their academic and playing lives – is something we pride ourselves on. Preparing them for life and future academic success and seeing them grow is the best part about my job. It’s challenging because every kid is different but it’s certainly the most rewarding.”

– Text and images by Nathan Grubel.

Lighthouse Field is home of the Philadelphia Eagles. No, not the Eagles you’re probably thinking of, but the Eagles flag football team. Find yourself at the field on a Saturday and you may have a [continue reading…]

South Philadelphia: Over a Century of Deliciousness

No matter how much people fight temptation most give in every now-&-then to a little sweet treat.  And in South Philly many feel the best place to grab the tastiest of deserts is at Isgros. [continue reading…]