Brewerytown was home to many different breweries throughout the 20th century before and after the start of Prohibition.

For a little over a year now, Mike Wambolt and his crew have been brewing beer and making health-conscious food at Crime and Punishment Brewing Co.

“The name is from the novel by Fyodor Dostoyevsky,” said Wambolt, noting it came to him while he was reading the novel and home brewing. 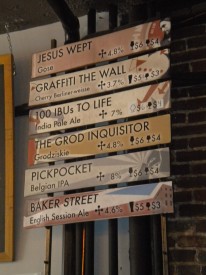 Some of the beer names come from Dostoyevsky’s novels or chapters from the novels, like one called Indecent Exposure.

“We had silly names, because that’s part of the fun,” Wambolt said.

Not every beer is named after a novel or short story, like the 100 IBUs To Life IPA or the Pickpocket Belgian IPA.

Crime and Punishment has put a new twist on the way brewpubs operate, from the environment to the food.

“We are harvesting an ethos of music and art,” Wambolt said. “We have new artists in here every month that are featured.”

But it always comes back to the beer at C&P, he said, “and at the end of the day, we make really good beer.”

Unlike most brewpubs, the menu is oriented to that of an Eastern European style of cuisine. Kitchen co-manager Kristen Snow prides herself on keeping healthy yet savory items on the menu. 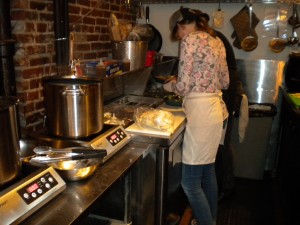 “We have a lot of good savory items that match up with the beer,” Snow said.

Two of the biggest sellers are the house-made pierogis and dumplings. Being a brewery, the beer is not only paired with the food, but incorporated into the food when possible.

“We’re making a mushroom soup using the stout’s wort, before it gets turned into beer,” Snow said.

The beer itself is made for anyone and everyone to drink – that is Wambolt’s goal.

The future of the brewery will begin with a $70,000 winter expansion, making the second floor of the building an event space.

In 2015, Point Breeze has witnessed a seasonal pop-up beer garden and a bistro opening in the neighborhood where change is no longer just in housing development. As a neighborhood gentrifies, businesses follow suit. The Point Breeze [continue reading…]

North Philadelphia: Through Their Eyes

I provided Skyler and Christina with disposable cameras to capture images of their neighborhoods. The purpose of this activity was for them to portray the most significant aspects of their lives. Skyler Baker A self-proclaimed [continue reading…]

Brewerytown: Laid-Off Teacher Gets Back on His Feet by Opening CrossFit Gym

For most people, being laid off from a position as a high school social studies teacher would be a stroke of bad luck. For Brian Terpak, it was the universe’s way of telling him to [continue reading…]