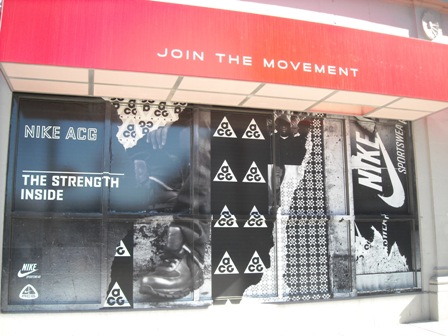 At first glance, Villa looks like just another urban retail store on the block. However, three simple words differentiate this hip hop apparel store from its counterparts.  “Join the Movement” is the slogan that can be seen at every Villa store location.

The phrase is intended to stir up some curiosity for customers to take a peak.

One step into Villa and you are met by the booming sounds of hip hop spun on the a turntable by a live disk jockey and some pretty savvy customer service. Alexis Lopez, who manages the Villa on 1231 N. Broad St., has been with the company for seven years and will back its customer service any day.

“The best thing we can give people that are shopping is customer service bottom line. We’re service superstars here. We’re not just associates,” said Lopez.

Customer service has kept Villa going even in a recession. With customers noticeably cutting back on how much they spend, Lopez is not in the least bothered and even offers some advice to shoppers.

“I think a recession is an echo of people saying it too much…I’ve given plenty of advice to customers, I tell them  to adjust to what is going on in the world right now,” Lopez said. “Be a smart shopper…if your chasing the fashion wait for the sales…there’s always sales and you can’t run out of fashion, you can find it.”

However, Villa’s commitment to a community also has kept it going.

Nineteen years ago, a waitress and a steel worker launched the Sneaker Villa in a suburban strip mall just outside of Reading, Pa. The couple, Ruth and Chris Lutz, established the store to raise enough money for their children’s education.

Upon his graduation, their eldest son Jason Lutz took over the family business and decided to open several stores in urban neighborhoods. Lutz saw the benefit of capitalizing on the popular hip hop culture and wanted to use the stores as vehicles to affect their respective communities. Thus, the movement was born.

Partnering with schools, local governments and community groups, Villa has been involved in several community service projects, education initiatives and anti-violence programs, and has made generous financial contributions as well.

“Just the other day we donated $25,000 to the Martin Luther King [Recreational] Center. We opened a teen center there,” Lopez said. “We’re doing college prep for free.”

Other programs and activities provided by the Villa teen center include computer training, leadership development and field trips. Villa plans on opening two more teen centers–one at the Francis J. Myers Recreation Center and the other at the Feltonville Recreation Center.

Taking a chance to make a difference

Will Little, the creator of a local drama group called “Poetry in Motion,” has benefited from Villa’s commitment to local communities. “Nobody ever taught us when we were growing up. The right thing was to sit on the corner and sell drugs, get with chicks and make babies all day. To us that was something that gave you respect and honor, but in reality it’s destroying our community,” said Will Little, whose group performed on Villa’s “Take a Chance Tour.”

The tour was coordinated by Villa with a goal of visiting 30 schools in 30 days to talk to students about issues affecting ing their community. William Penn High School was one of the stops, where students filed into the school auditorium to see Poetry in Motion perform.

“We try to help them relate to the situations in the stories that happened to our ancestors in a way they can understand,” said Little. “When I was younger. I did not think slavery affected me at all, but it does and transcends down to the way we think and behave today.”

Little is very familiar with the street life, dropping out of high school and taking on a life of crime, selling drugs and eventually ending up in prison. Little uses these experiences through drama to educate the youth.

“I did just about everything, every crime,” he said. “That’s based on my upbringing living in a single parent home. My whole thing was to try and see what I could do to change myself and once I changed myself then other people can try to be better and learn to do better.”

Even with the efforts of Villa and individuals like Little, as Alexis Lopez stresses, it takes a community to change a community.

“We are looking for greatness. We’re looking to get there, but we can’t get there by ourselves. So we embrace the community and we’re taking them with us. The idea is to build a better community.”