When Stephen Phillips saw a group of teens brutally beating Eddie Polec to death from his doorstep and no police responded to his 911 calls for help, he and a group of community members decided something needed to be done.

“You’d rather be proactive than reactive,” Phillips, who raised three children in the neighborhood, said. “Our community was reactive to the tragedy.”

Polec, then 16, a Cardinal Dougherty High School student who lived in the neighborhood and son of a well-known crossing guard in the area, was beaten with bats by a mob of teens from a local suburb on the steps of St. Cecilia’s Church. Phillips said more than 30 calls were made to 911 during Polec’s beating from the area in a span of 20 minutes, but no police were dispatched to the scene until it was too late to save the teen.

“It was a major failure of the Philadelphia 911 system,” he recalled. “He [Polec] was literally an innocent bystander.”

Today, the Fox Chase Town Watch is one of the largest and most active town watches in Philadelphia, made famous by Polec’s November 1994 murder, which triggered its establishment. For the last nine years, Phillips has served as president of the organization, which is bolstered by a group of roughly 50 volunteers from the community.

“Town Watch is the eyes and ears,” Phillips explained. “Our goal is to help things [like Polec’s murder] not to happen.” 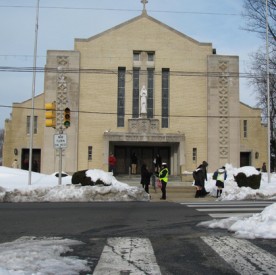 Gerry Montgomery, a resident of Fox Chase since 1965 who raised three children in the area, lives across from Jeanes Hospital – Town Watch’s home base. He said he doesn’t know much about the organization, but feels safe in his community.

“I don’t think we’ve had any problems since the Eddie Polec incident,” Montgomery said. “I would say that has an effect that corrected the problem.”

Montgomery said the biggest change he’s seen over his five decades in Fox Chase is that younger families are moving to the suburbs more often.

“People have kids and they move out, then people move from other parts to this area,” he explained. “What changes is the fear of what people will bring with them.”

Phillips said he and a group of several volunteers patrol the neighborhood, which is bordered by Montgomery County on the north and west, Pennypack Park to the east and the Rhawnhurst section to the south, between the hours of 9 p.m. and 1 a.m. Friday and Saturday nights.

“We would’ve been there [for Polec],” he said. “We’ve had similar incidents over the years, like 15-year-old William Sheb who was beaten outside the [Fox Chase Recreation Center] by a couple of Mayfair youths.”

When volunteers and community members keep an eye out for changes and happenings in the community, Phillips said, the community is more likely to be safe and the organization can affect change.

“The men ride around at night, and they have their eyes out. They really do,” Colleen Cole, a mother of five children who lives in Fox Chase, said. “I have two teens who are out in the neighborhood, so I’m glad [the Town Watch is] around.”

In addition to patrolling, Phillips said he networks with officers from the Second and Seventh Philadelphia Police Districts and meets with local politicians, including State Rep. John Perzel, State Rep. Brendan Boyle, City Councilman Brian O’Neill and State Sen. Shirley Kitchen on a regular basis to keep the lines of communication open for the community.

“I met [new Philadelphia District Attorney] Seth Williams and had him in the community speaking,” Phillips said. 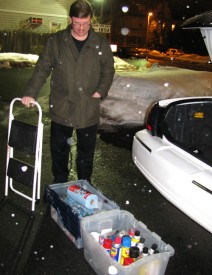 The Fox Chase Town Watch was established as a non-profit organization and receives most of its funding from private donations by local businesses. Phillips said he works to keep the budget as low as possible, and the biggest annual expenditure other than supplies is the community’s “National Night Out” fair event in August.

“You can have all the money in the world,” Phillips said of keeping the Town Watch budget small. “But you really need to learn how to get your resources together and network. [For example], the city will give us paint to cover graffiti. If we learn to network and put people to work, we have something brewing.”

In addition to the Town Watch patrols, one member, Mike Bobby, works to remove graffiti in the area. Bobby and Phillips also report instances of graffiti they cannot remove themselves to larger city organizations for removal.

The Town Watch also has a discussion board on its Web site where community members can leave anonymous comments about anything from a neighbor with an eyesore car to loitering teens using drugs for volunteers to watch.

Phillips also works six days a week at a local post office, but he said he doesn’t mind the hours he spends each week working with the Town Watch and monitoring the hotline 24 hours a day on top of that.

“You can’t have an ego about it. A lot of town watches have gone under because of egos,” he said. “We just want to live in a safe community.”