Being HIV positive is no longer a death sentence. Just ask Jennifer Poole. Poole lives in Hunting Park and sees her HIV status as no big deal. “Some people let their disease carry them away to the point where it makes them sick. Most people I know who have any type of illness just keep on living life. AIDS is no different,” says Poole.

The Hunting Park neighborhood is in the highest 50 percent of Philadelphia for people living with AIDS, according to the Department of Public Health. The neighborhood is seemingly open and welcoming to residents with AIDS.

“I love living in Hunting Park. The people are very friendly and there is a good mix of people here. I thought people would give me hell if they found out I was HIV positive, but for the most part, I have felt supported,” says Poole.

Below is a graphic of HIV cases in Philadelphia. 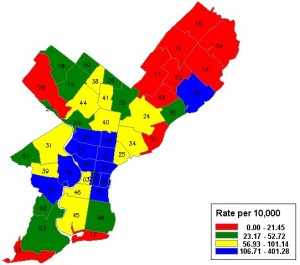 Ana Lapp, a registered nurse and HIV administrator/care coordinator at Esperanza says: “Hunting Park is a constantly changing neighborhood.  The majority switches between African-American and Hispanic people. Because those groups are statistically more likely to contract AIDS, we always have quite a few patients from the neighborhood.”

Poole and Lapp have a special relationship. “Jennifer has been one of my precious patients,” says Lapp with a grin. “I met her pretty soon after I came here to Esperanza. Just watching her progress through so much – homelessness, AIDS, her breast cancer – it’s exciting to see her progress.”

Poole was diagnosed with breast cancer in the fall of 2009 and has been in chemotherapy since December. “Her strength is impressive. She was a beanpole when I met her! But she has been great with her medicines. I hope that she continues to do well through her cancer treatments,” says Lapp.

The health center is not in Hunting Park, but the link between the neighborhood and Esperanza is strong for more than one reason. “I think we have a lot of referrals from the neighborhood because of our reputation. People are really cared for here. They are feeling God’s love; they may not know that it’s His love, but it is. We also have a lot of people working here that attend Spirit and Truth church which is located in Hunting Park,” says Lapp.

One of these people is Andres Fajardo, assistant pastor at Spirit and Truth and the president of the board of directors at Esperanza. He also heads up the AIDS ministry of the church. “A couple years ago, we felt a strong conviction to do something about the AIDS crisis in Africa. We started sponsoring three AIDS orphans and then looked at what we could do in our own community,” says Fajardo.

Teams from Spirit and Truth were trained in “the reality of AIDS: the biomedical aspect, the social service aspect, the family aspect and the spiritual aspect,” Fajardo explains. The two organizations partnered together to volunteer at hospices in the city, including the Calcutta House and the Serenity House in Fairmount. Members of these teams would go visit with patients and do social activities or lead a Bible study and worship service.

“I see how important these ministries are and how important the work is that Esperanza Health Center is doing, bringing hope and also healing and stabilization of lives to people who are HIV positive. As a church, we wanted to really take seriously the call to visit and come alongside those who are ill,” says Fajardo.

For Fajardo, this ministry proved to be inspirational in his own life. “Though I am not HIV positive, one of the things I’ve learned that as far as a disease goes, it’s not that dramatically different from other diseases, especially now. People can live fairly normal lives. I’m grateful for that medical development and how it has blessed people. I know people with AIDS who say, ‘I have a disease, but I’m choosing to live a normal life. I have goals that I will continue to pursue.’ For me to see that, it has encouraged me in my own struggles,” says Fajardo.

With members of the community actively engaging in HIV awareness and in the case of Spirit and Truth, in training, the stigma that follows the disease is slowly fading. Poole is a walking testimony to that growth in community sensitivity.  “When I first found out, I couldn’t tell people because they thought they would get it from talking to me. People didn’t know what it was about.  But now, I am open about the disease. It’s just like having diabetes. It’s just contagious. My friends and neighbors support me. That would have never happened 15 years ago,” says Poole.