On Memorial Day, people all over Philadelphia remember their fallen relatives, friends and colleagues. A memorial service of sorts was held recently at the Cuban Community Center in Philadelphia’s Feltonville section. This group of people commemorating their loved ones is called Las Damas de Blanco, or the women in white. 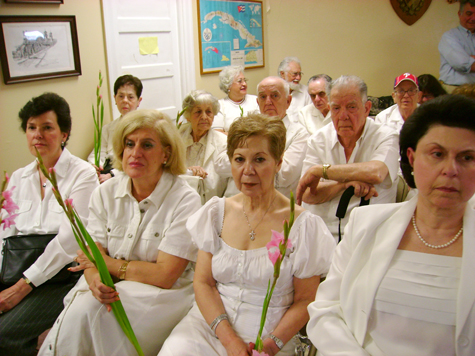 Las Damas de Blanco, or the Women in White

Las Damas de Blanco is a group of wives and female relatives of dissidents jailed in Cuba in 2003. The group originally sprang up weeks after what is now known as the Black Spring in 2003, when 75 political activists and independent thinkers were jailed and given sentences of up to 28 years in prison. Those sweeping arrests are considered by many to be one of the worst crackdowns on political dissidence in Cuban history. Many of those imprisoned in 2003 remain incarcerated.

As a response to the arrests, Las Damas de Blanco began to meet weekly. Dressed in white, each woman held a gladiola in her hand as they marched as a sign of solidarity and peaceful protest for the release of  beloved husbands and relatives. This opposition movement has been praised for its non-violent, peaceful approach and the women involved have voiced their passion for the cause. 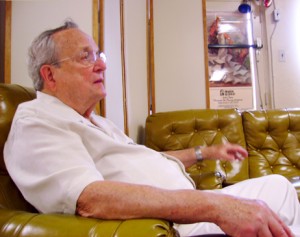 “We just want to let everyone know that what’s going on over in Cuba is just not right!” said Marta Gomez, one of the women in white in attendance. “These men are being imprisoned for simply disagreeing with Castro and they are hurt and tortured and left to rot and it’s just not fair. We want to show Castro that we want them free now.” Gomez moved to Philadelphia in the 1970s and spoke of her continuing discontent with Cuba’s government as well as the lack of awareness with the issue of political prisoners.

Jacob Goldstein, the president of the Cuban Community Center, commented on what he sees as a lack of help from the U.S. to curb the problem of political oppression in his Caribbean nation homeland. “This country has welcomed all of us with open arms but unfortunately has not really done much, if anything, to help our country, and it’s sad. What we’re trying to do with this event today is honor these men and the struggle we’re going through to get them liberated.” 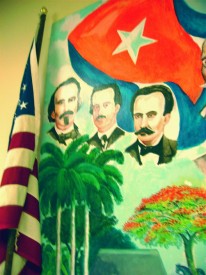 The event reflected both a Cuban and American patriotism.

The event was small and personal, reflecting the nature of the movement itself. Traditional Cuban songs were sung and Cuban food was served. The women in white mingled and laughed and celebrated their husbands and relatives’ plight with a bright optimism that parallels their firm determination. “We want to show that we won’t give up and that these men must go free. The oppression has to end and we’ll stand together as long as it takes,” said an impassioned Gomez.

With their numbers growing, Las Damas de Blanco may reach their goal of liberty at some point.