Growing up in Chestnut Hill means trips to Bredenbeck’s Bakery for hand dipped ice cream in the summer, perusing trinkets at the Antique Gallery’s outdoor tables, stopping by O’Doodles for bubbles or other small toys, and grabbing dinner at McNally’s Tavern before heading home.

Those are a few of the stores along the Avenue that have been staples in the community for decades. However, anyone who has been a part of Chestnut Hill through the years has also seen favorite stores shut down. A Color Me Mine once thrived there, but the storefront now seems to turn over every year, hosting a wide array of hopeful businesses.

Chestnut Hill has no shortage of interesting stores – think store devoted to only olive oil and balsamic vinegar – each hoping to become the next Kilian Hardware, which celebrated its 100th year anniversary in 2013.

Knowing which types of stores will succeed is difficult, though and has required the assistance of a full-time retail recruiter position.

It was the vacant storefronts with papered windows, chipped paint and omnipresence of failure that started gathering negative attention. Walking the cobblestone streets began to seem less quaint and more like stepping into a town turning ghostly. As a community that was named one of the best urban neighborhoods in the country by Forbes, this was unacceptable to many residents and storeowners.

Four years ago, the Retail Recruitment Program was initiated to change that problem. Two different women have filled the position in that time and a new retail recruiter is currently being searched for to fill the spot.

“In 2010 we completed a strategy for the Chestnut Hill district of Philadelphia, which boasts some of the most affluent, well-educated residents.. At one time Chestnut Hill’s rents were on par with those in downtown Philadelphia, but they did not keep pace as the district’s shop and restaurant mix failed to evolve. The recruiter we trained has already brought a number of Philadelphia’s best independent operators—as well as national boutiques like J. McLaughlin—to Chestnut Hill,” Downtown Works stated.

The retail recruitment program started by Downtown Works trains recruiters who create market analysis for the area in need, develop a strategy and then implement it.

“Our new retail recruiter that we’re looking to hire will go beyond just prospecting by continuing to build those strong relationships with property owners throughout the district,” Martha Sharkey, Executive Director at Chestnut Hill Business Association, Business Improvement District, and Parking Foundation, explained.

In the past four years, 15 new retail stores have become a part of the Avenue and eight new restaurants have opened. Paris Bistro and Jazz Cafe is the newest restaurant, while children’s clothing store Villevillakula, Green Street Consignment Kids, and organic lifestyle store Greenology are the newest retail boutiques.

“Our retail recruiter goes out into different communities and looks for business that we need to build up our community and research what stores are really up-and-coming that might be a good fit. We are always looking for a great mix. I see the new stores coming in and then also look at the businesses that have been here for decades,” Sharkey said about the process of finding businesses to fill the vacant stores.

Including the landlords of the vacancies is also a priority for the retail recruiter. Being someone who has a good sense of the community and listens to the needs of the area is essential in the role of addressing how to combat business turnover and empty stores. 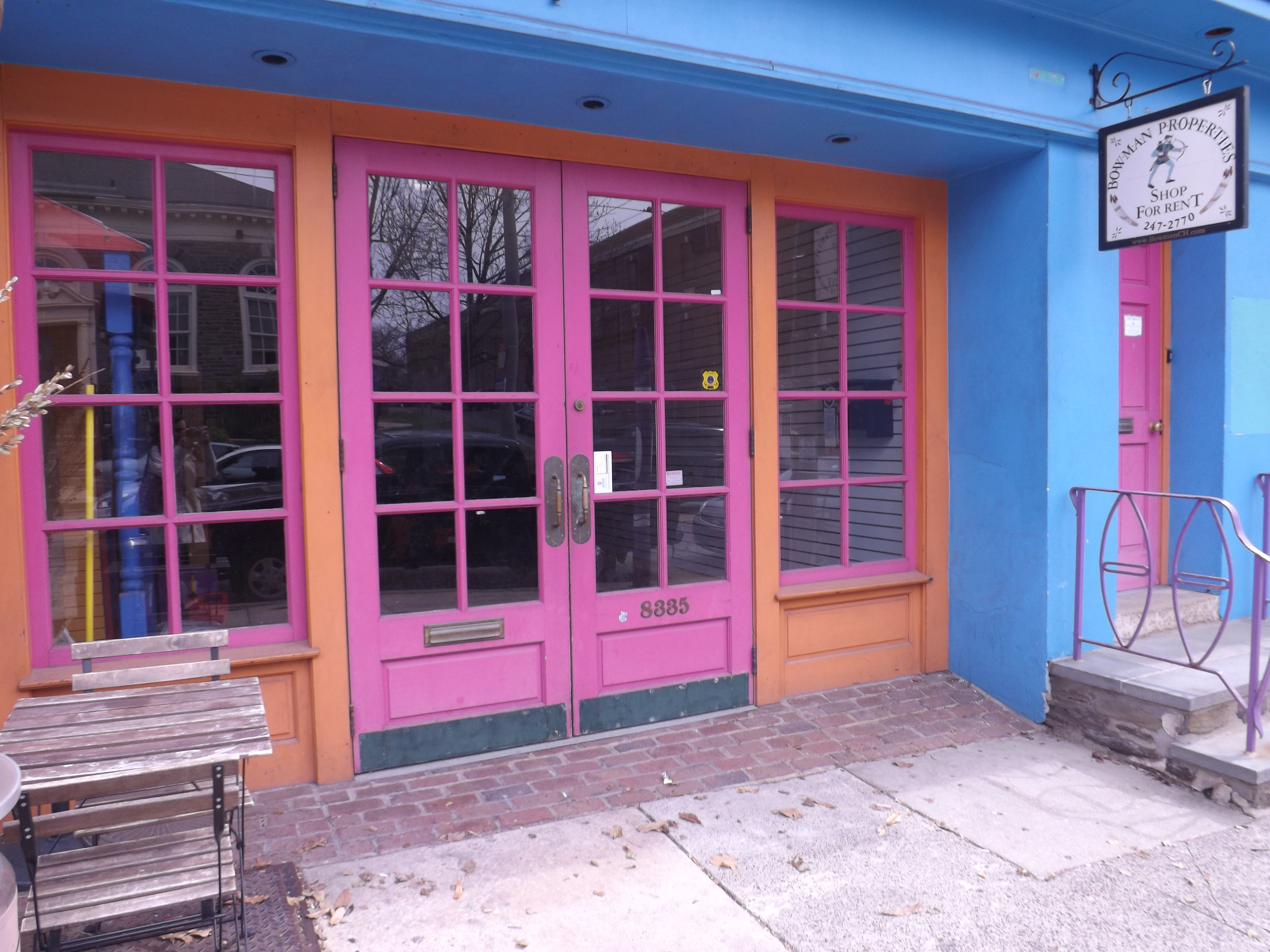 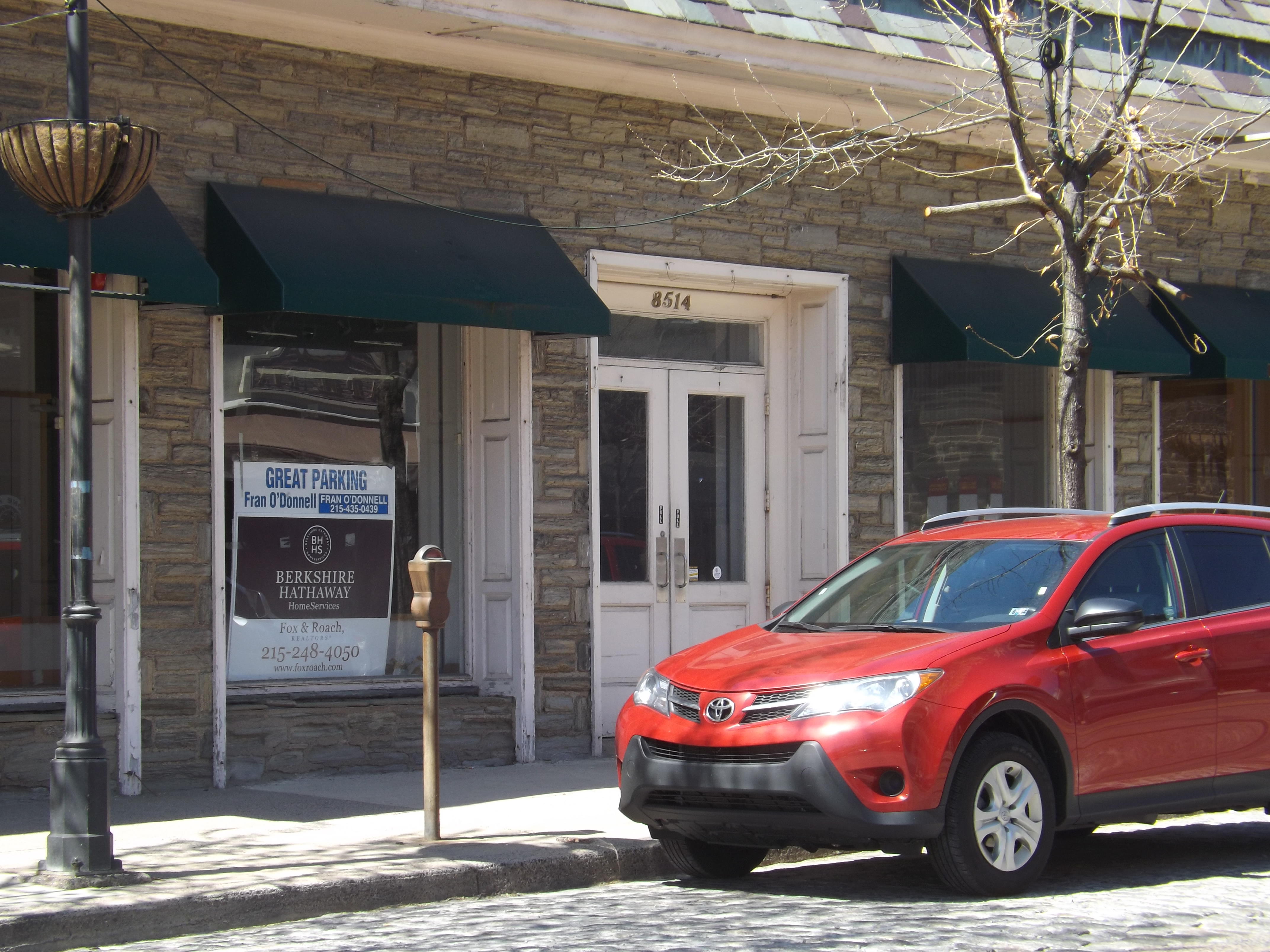 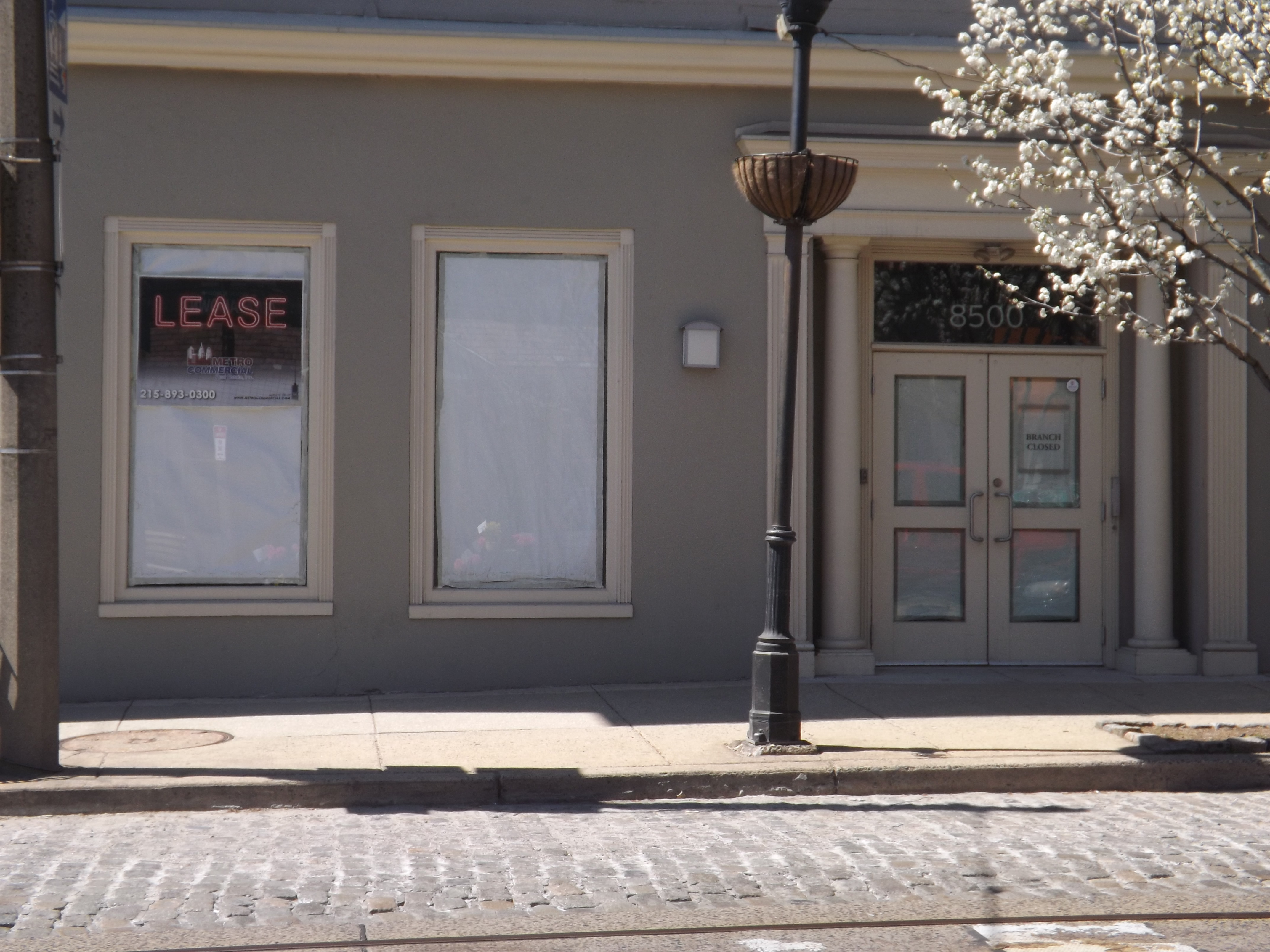 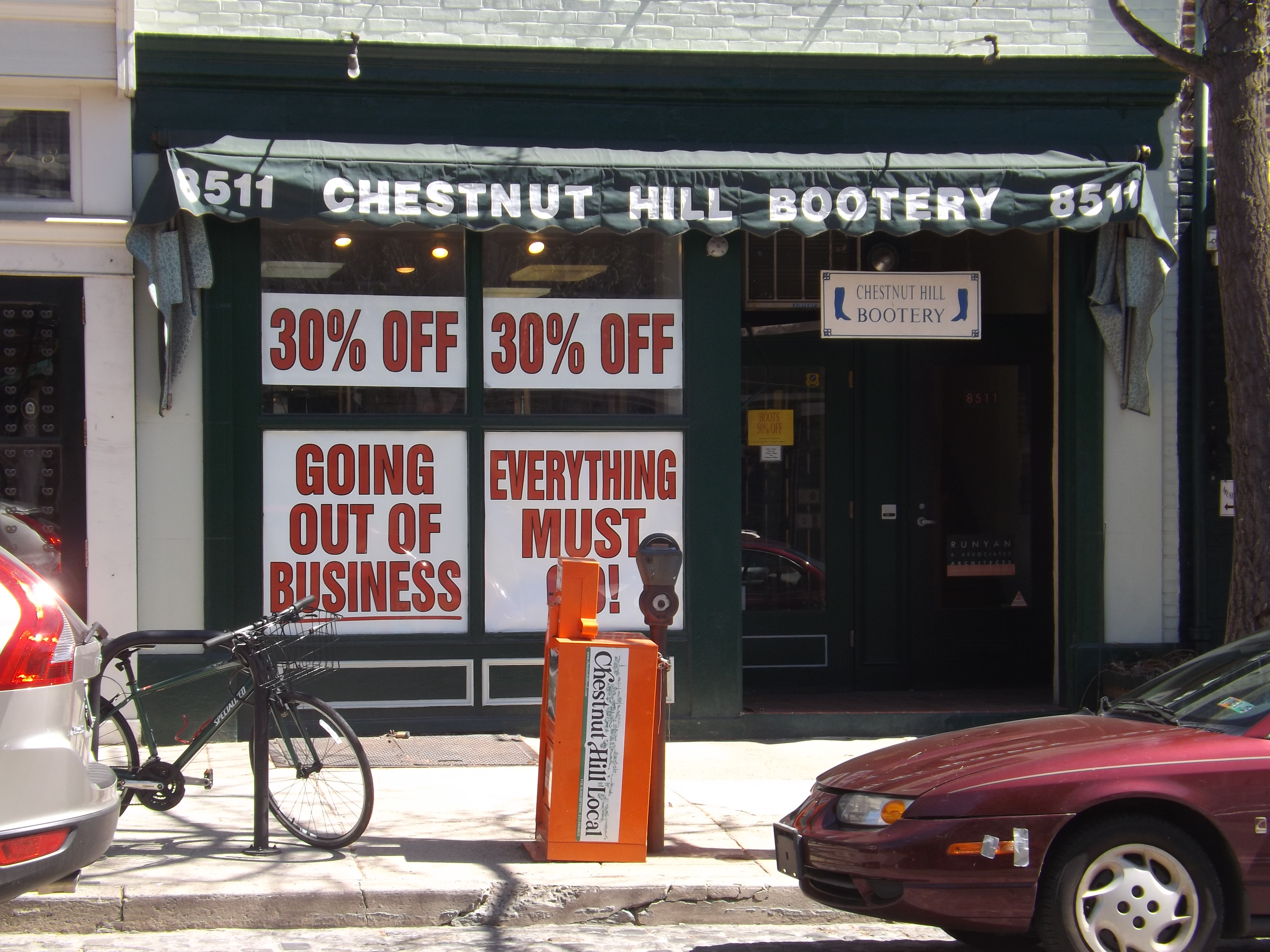 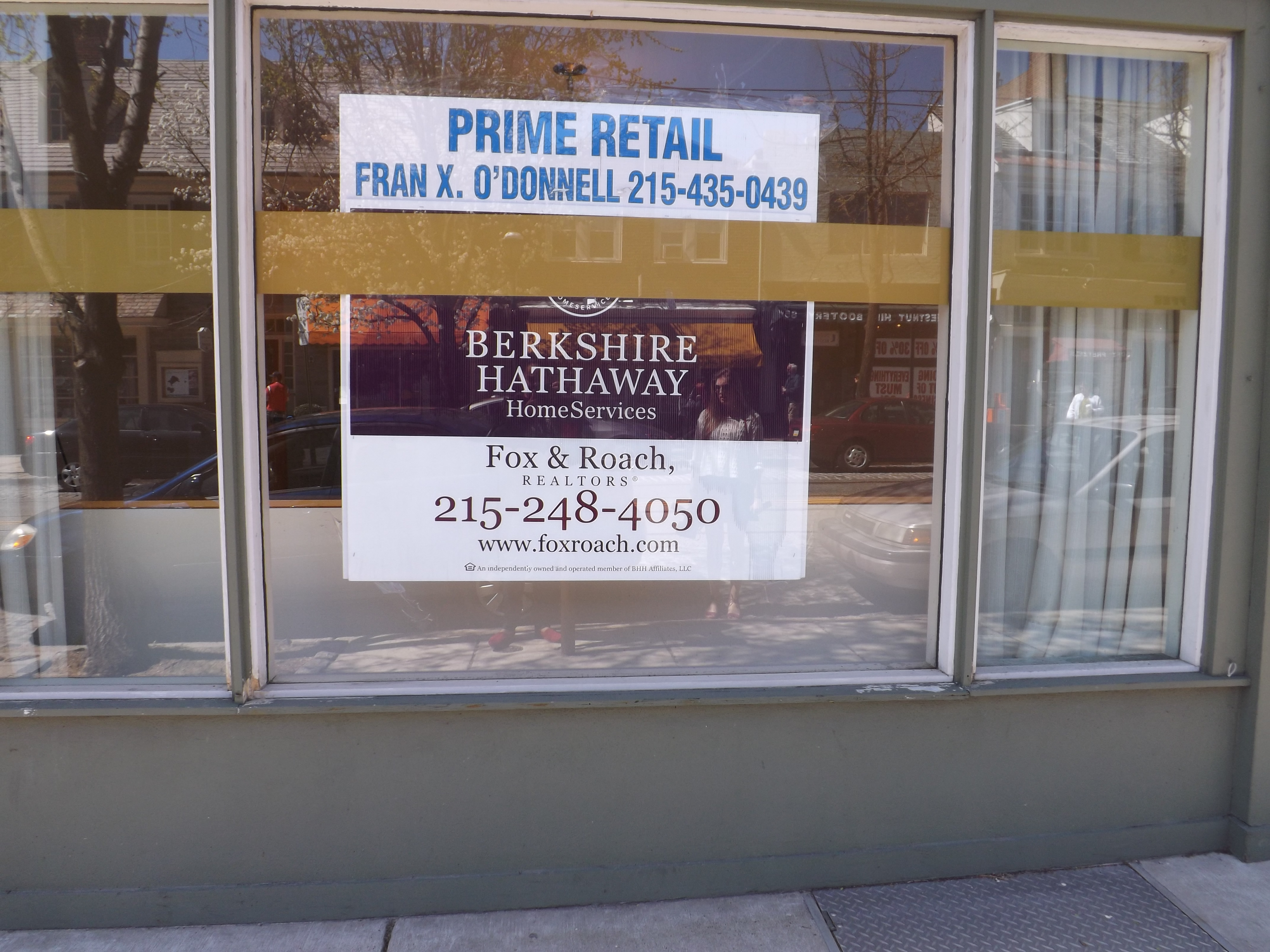 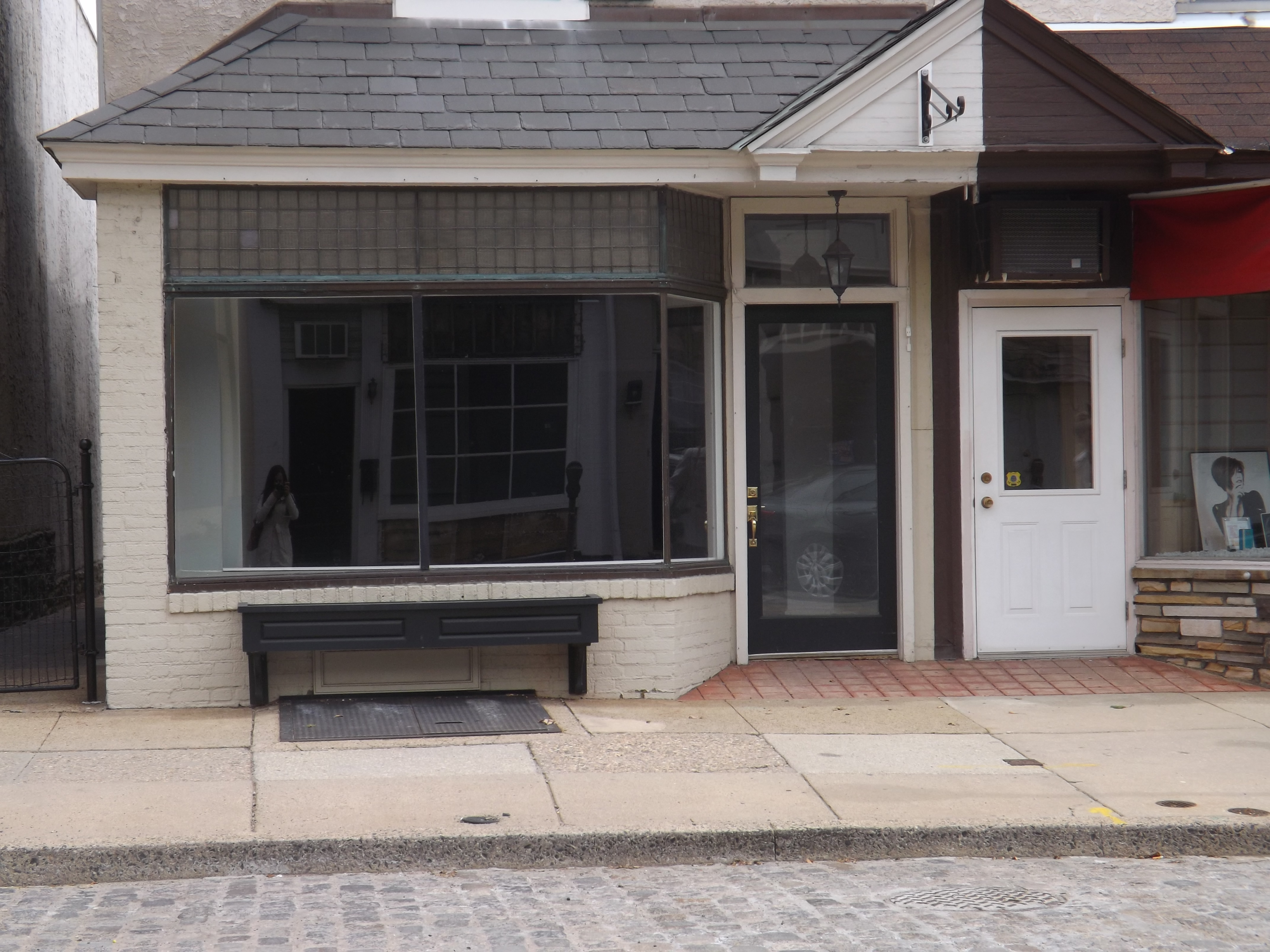 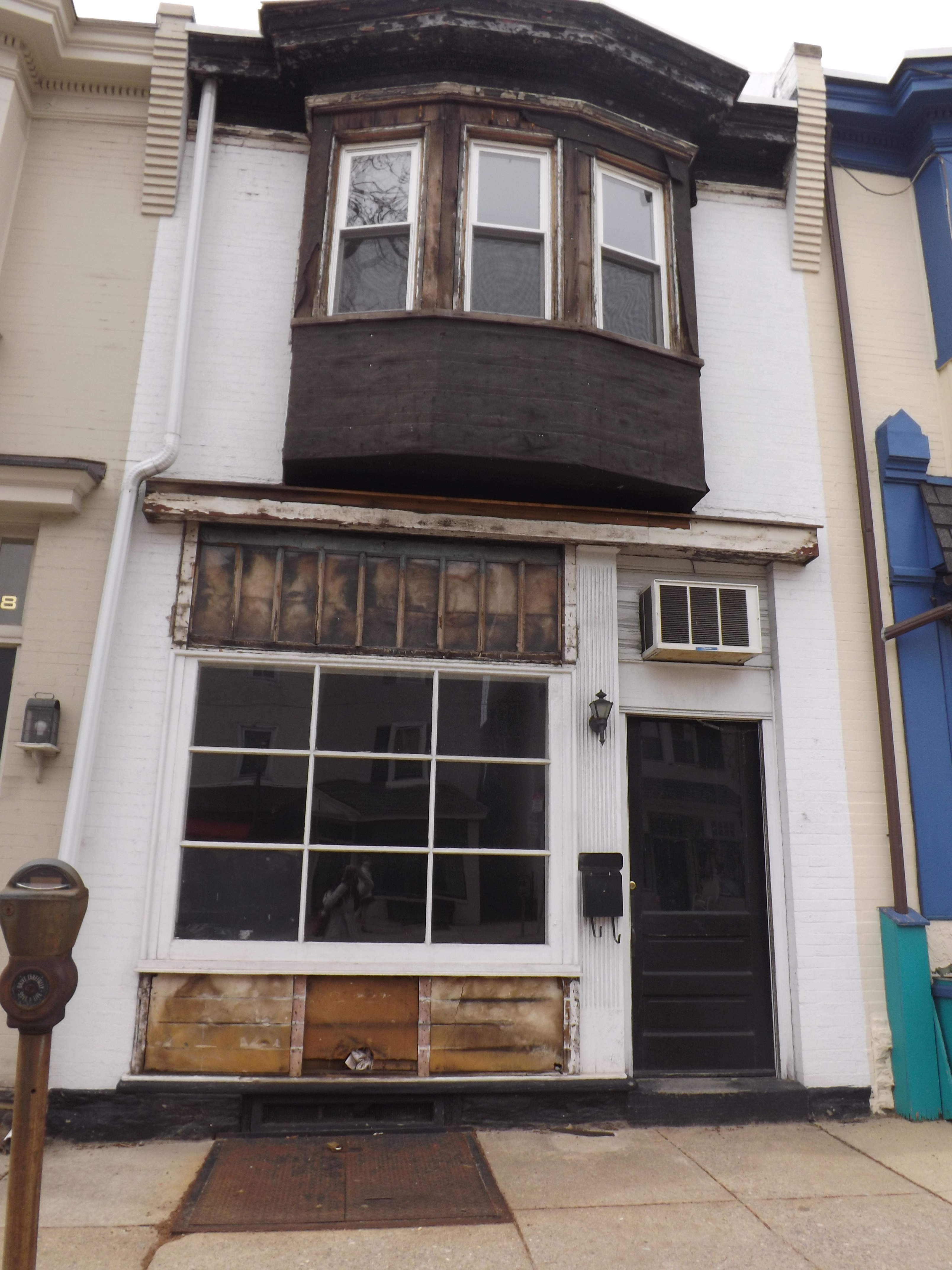 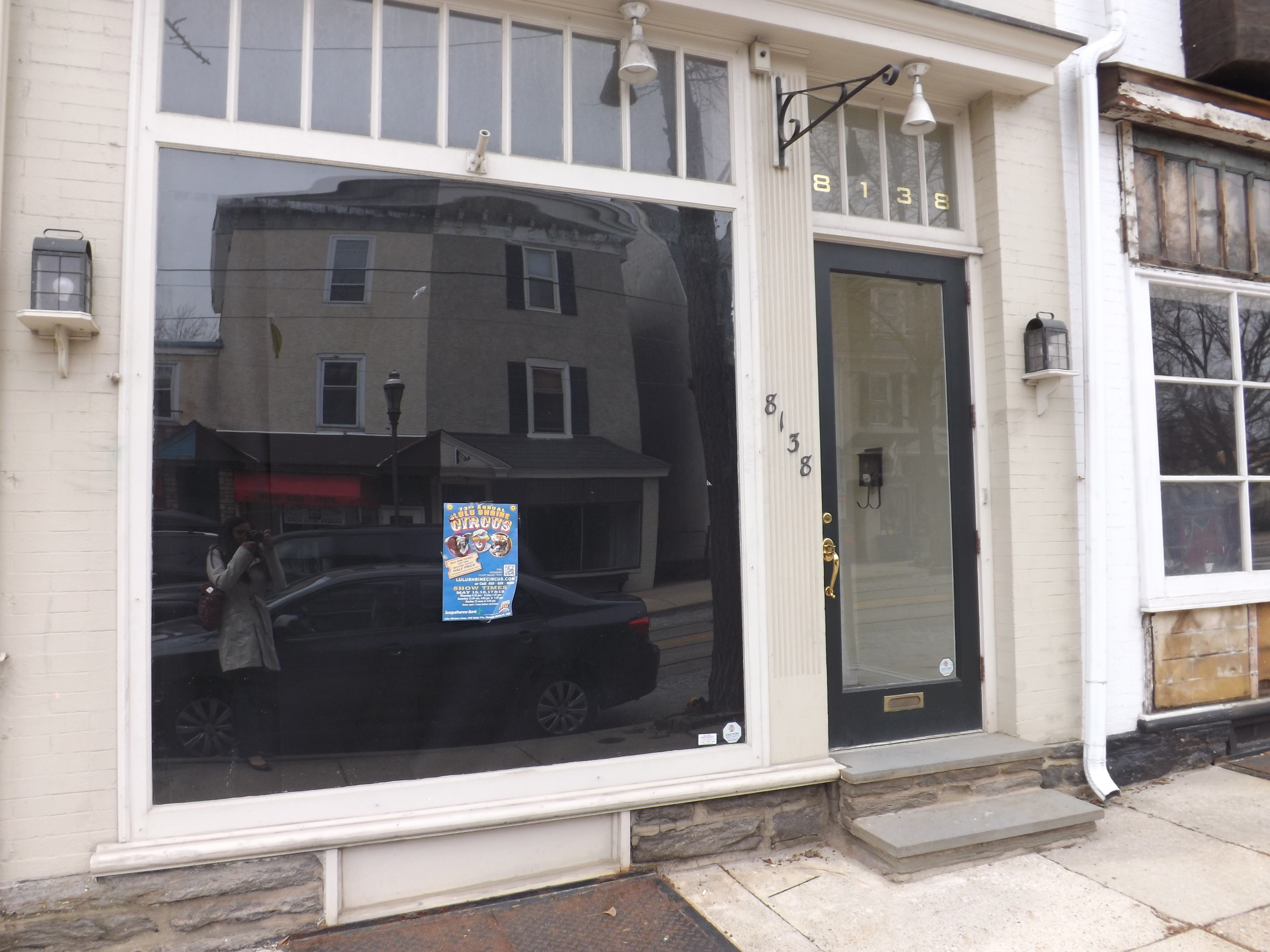 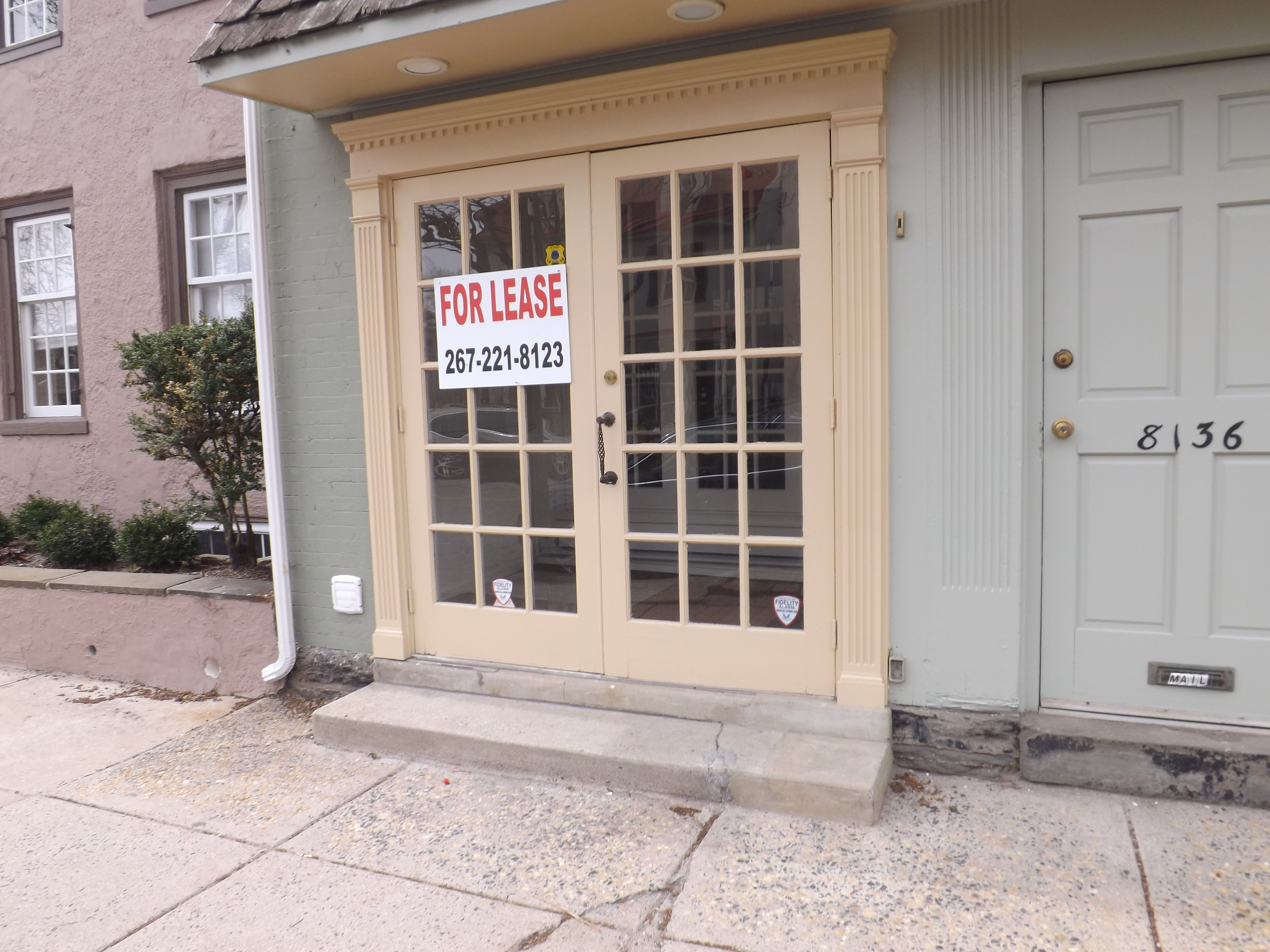 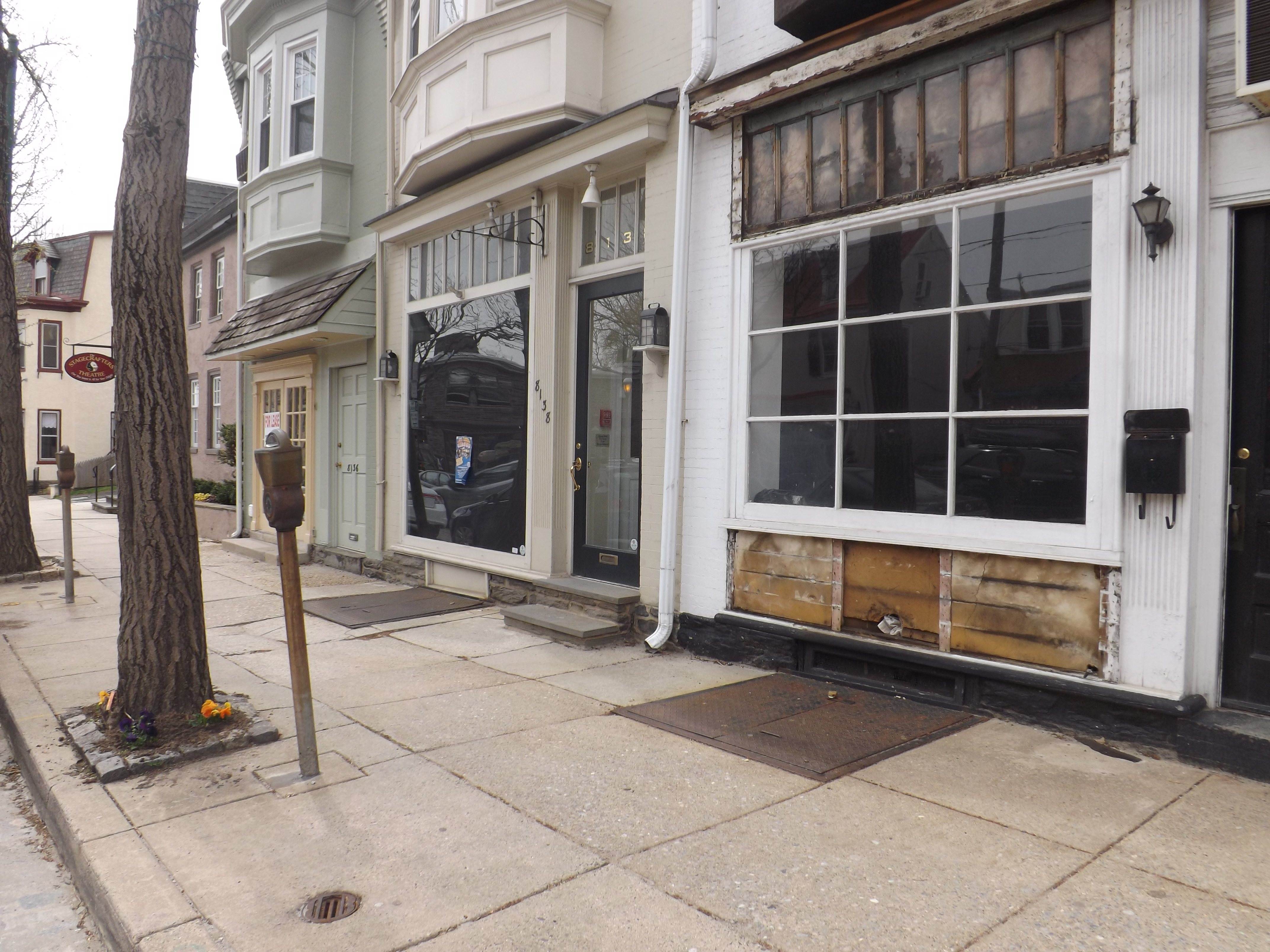 <
►
>
A vacant storefront located at 8136 Germantown Avenue awaits transformation from the Business Association.

The Chestnut Hill Business Association has taken the issue seriously, even promoting a handy how-to on starting a business along the Avenue and providing a list from Bowman Properties, a real estate company, of the vacancies.

It is surprising that Chestnut Hill has struggled filling the stores along the Avenue. The neighborhood is one of the wealthiest within Philadelphia and the greater surrounding area. According to a 2011 research report by the Philadelphia Research Initiative, a nonprofit organization, the average household income for the area is 118,742 dollars. An area with wealth usually enjoys having a shopping district and, since Chestnut Hill lies at the edge of Philadelphia, having its own retail corridor seems convenient.

The types of stores that are opening within Chestnut Hill could be a part of the problem.

“I would love to see a bookstore, since [Chestnut Hill] lost [Boarders Bookstore] we have missed having that type of place in the neighborhood,” Kate Katchen, a resident of the area and mother, said.

Specialty stores seem to pepper the streets of the area, boasting intriguing things from fancy cheeses to garden gnomes, but it is more essential stores that residents seem to want and need to fill the vacant storefronts.

Weavers Way Co-Op, which many use as their general grocery store, has become a favorite.

Chestnut Hill does not want to lose its charisma by bringing in all generic stores or chains, but hopefully the new retail recruiter for the area can bring stores that will become permanent staples for the residents who use the avenue for most of their shopping needs.

[vimeo 69421188] Chestnut Hill’s scenic Pastorius Park is great for a daily escape – a sprawling green space valued by the community for rest and relaxation. Come summertime, however, that tranquility is replaced by a custom [continue reading…]

https://vimeo.com/53047583] At 92 years old, Russell Goudy still walks the creaky wood floors of his hardware store with obvious intent. When customers express doubt about finding an item, he guides them to the appropriate aisle, [continue reading…]