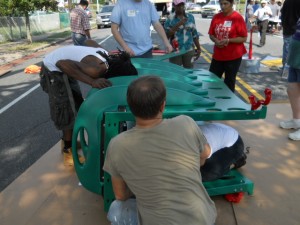 Assembly required takes on a whole new meaning on a Saturday when 200 volunteers at the preschool at St. Stephen’s Church are unwrapping a very large present–piece by piece, box after box–in the middle of a closed-off Northeast side street.

Amid the sea of flattened, brown boxes and sheets of stray bubble wrap, volunteers are assigned to teams of three and five people, making small clusters sporadically spread out across the barely visible black asphalt road. The altruists are sitting, standing, bending, twisting and mulling over how to properly screw, hook, join, attach and connect colorful poles with potato chip-shaped plastic chunks.

Lowell Hartzell, consulting his consolidated 12-page instruction manual with worn corners at the staple, moves from station to station, continually running his hands through his short, salt-and-peppered-colored hair and pulling at his white socks that barely stick out from his tan Timberland work boots. He first instructs one team and then another, troubleshooting his way through a field of questions and concerns.

Hartzell, a former lumber yard manager, has a deadline of 2:30 p.m. to deliver to the children of St. Stephen’s Daycare Center the gift of a brand new playground.

“Since I build playgrounds for a living, they have me here to help out, troubleshoot, keep things moving,” says Hartzell, who stands about 6-foot-4-inches tall with a linebackers frame, but a bowler’s belly. “They usually go pretty well, we pretty much meet our deadlines. The KaBOOM! team leaders keep things pretty well regimented, I’m just along for the ride and to help when I can. ” 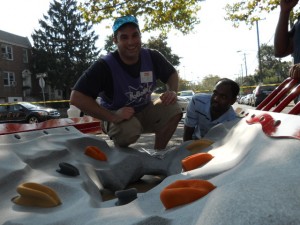 The process kicks off with a design day where local children submit designs for the new play space. Each week, a KaBOOM! project manager works with the planning committee to help them organize logistics for the day of the build. This eight- to 10-week planning period culminates in build day, in which community and corporate volunteers work side by side to build a playground, ice rink, skate park or refurbish a sports field.

The Knight Foundation, which works with the two churches, Grace Trinity and St. Stephen’s, wanted to bring a KaBOOM! demonstration to Philadelphia. The foundation contacted Grace Trinity Pastor Chandra S. Soans, who is also the executive director of the Grace Neighborhood Development Corp. Soans worked out an application with St. Stephen’s Daycare, and the rest is history.

“I can’t go to school today, I have to build a playground!” said Sandi Ramos, 31, to her Lincoln University professor as her excuse for missing her class on Saturday. “My son is two, so he’s gonna love this. And it’s good because the playground down the street is for the bigger people, you know, and so this is something geared to the smaller kids and safer for them, and you really don’t have to worry about getting run over by the bigger kids so that’s really exciting.”

It’s 1:01 p.m. and Lowell Hartzell is slowly sinking in the mulch where the playground will go– directly to the left of the church’s front door. Around him men are rolling wheel barrows full of mulch, while others spread the compost evenly throughout the surface on their hands and knees. Hartzell offers his help to a team determining how the red poles will fit together with the yellow poles, and which way the metallic slide will face. He takes a quick look around at the pre-dug holes, pulls his head up for a few seconds, then redirects his attention to his worn-out manual. A woman with bushy, fuzzy brown hair wearing a bright purple construction vest with KaBOOM! emblazoned in white across the back informs him the concrete is being prepared. “OK, right on schedule,” he says.

“We are using seven tons of mulch today, SEVEN TONS! Isn’t that amazing!?” said Titus Wright, 50, a Northeast resident and a member of the Grace Trinity congregation. “My wife and I signed up after Pastor told us he needed 200 volunteers to sign up, and we like the guy, he married my wife and I last year, so we both said yes. It’s great for the community and it’s pretty fun getting my hands dirty.”

“The imagination box is cool and it seems really high tech,” Ramos says. “All the teachers are trained to use it, and they help the kids build to a form, and then they can it take it apart and make it another way. And when they’re all done they just put it away at the end of the day, and it’s done.”

Outside, the volunteers are digging, pouring, mixing, mulching and building. Inside, the kids are painting.

“The parents made an outline of a mural and the kids are filling it anyway they choose,” said Carolina Herrera, daycare director. “This is their project too, and even if they can’t help build they are helping to make their own difference by matching what is in their minds with what is in their hearts.”

Lowell Hartzell watches the closing ceremonies with his arms folded, a small smile creeps across his face.

What do you think of the final result?

“You said it before, it’s the gift that keeps on giving,” he says.