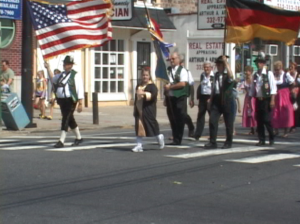 To the typical American, schnitzel, David Hasselhoff and glockenspiel are what define German culture. But there is much more to this culture than just sausage and former hunky lifeguards. First and foremost there is Oktoberfest, a celebration throughout the world that originated in Germany.

Crown Prince Ludwig of Bavaria wanted the people of his country to celebrate his marriage in 1810. Now, 200 years later, people all over the world are still celebrating with more than six million flocking to the German mecca. And while this is a large number of people who participate in the homeland, German-Americans in the United States find a way to celebrate with out hopping over the pond.

The Steuben Parade, held annually on the fourth Saturday of September, was originally held in New York City in 1957, but Philadelphia adopted the tradition in 1970. So in Mayfair, the parade is being held for the 40th year on the 200th anniversary of Oktoberfest. One of the benefits of the Steuben Parade is the family friendly atmosphere it provides. Oktoberfest is often known as being a celebration with beer.

In Germany, they even sell a stronger beer called Märzen. This beer is usually a little stronger than a standard beer and, as in most celebrations around the world, is consumed in large amounts. Movies like Beerfest have furthered this stereotype of the holiday. While beer is consumed during the event, it is not the only cultural aspect of it. So while this may not be the most family friendly event out there, the Steuben Parade allows for German-Americans of all ages to enjoy a piece of Oktoberfest.

The parade may have seemed like any normal parade all over the country, but as the marching bands passed more lederhosen and dirndls, both traditional costumes, would be seen. Men and boys both don the shorts and overall one piece, while the women and girls wear their vibrant ruffled dresses. The parade gives the city of Philadelphia a very warm, homelike feel as children pick up candy thrown from floats, and traditional music is being played in the streets and all different cultures are exposed to the German lifestyle. The only thing missing to make this a truly authentic experience is a horse race like Prince Ludwig originated.

A woman born in Germany found the parade to be enlightening.

Claire Green, born in Germany, says, “It’s great to be in a country that welcomes the energy and gifts of all peoples, it makes the country greater and it’s more fun.”

And the German culture is something that is more prominent than one may think. Rieker’s Prime Meats, located near the intersection of Rhawn and Oxford streets, offers many authentic German foods.

With knackwurst, bockwurst, bratwurst and any other wurst you can think of, Germans and Americans a like can indulge in these delectable sausages. They also import some German favorites like Haribo Gummy Bears and various assortments of chocolate.

Also, if one is of age and would like to indulge in an adult beverage, Philadelphia is the place to be. With so many microbreweries, one can choose from quite the selection of Oktoberfest style beers. We in America are no longer limited to a mass produced Sam Adams Oktoberfest beer. We can enjoy a microbrew from Dogfish Head or go somewhere like Monk’s Tavern and enjoy specially crafted brews designed to for the season.

While it may seem as if this is all fun and games, long ago the relationship between the United States and Germany was not as happy. Simply dropping a name like Hitler makes most people uneasy but today many people let bygones be bygones.

Erv Francis of Wilmington thinks events like this are important to link the cultures.

“It brings a sense of culture and togetherness that has always existed between Germans and Americans,” Francis said.

While the Steuben Parade is one of the first events of Oktoberfest in the area, many more are to come. German-American Day is Oct. 6 and the Cannstatter Volkfest Verien is holding events throughout September and the beginning of October. For more information go to the website at www.cvvphilly.com or call 215-332-0121.