Scrapping metal is one of the few ways the homeless and very poor of Philadelphia are able to earn money daily. Nearly anything made of or containing metal, whether it is salvaged from trash and litter or outright stolen, can be used to turn a profit.  But for those who wander the street collecting scraps of metal, and to a lesser extent those who buy the metal, a life scrapping metal has become a hard one.

Joseph Kipp, 34, and his wife Susan Kipp, 41, have been living on the streets for almost a year. Heeded by the advice of other homeless scrappers, they began scrapping only recently.

“We’ve been scrapping off and on for years,” Susan said. “We’ve been doing it heavily for the last three weeks because of where we stay and what not,” Joseph said as he picked up an old, dirty duffle bag from the sidewalk and used a pair of pliers to pull the two or three zipper heads from the bag. “We live in an abandoned building.”

After scrapping since 10 p.m. the previous night, the couple obtained a shopping cart full of metal. The overnight search ended as they made their final steps to a scrap yard tucked behind the old Reading Railroad tracks on Silver Street.

In a mocking, sort of ironic way, the only business on this short street is Philadelphia Scrap Metal, a non-ferrous scrap metal buyer. The Kipps and a worker, Tex, who had recently lost an ear in a fight, loaded their haul, metal-by-metal on a large and surprisingly precise scale.

A minute or so later, a hand holding a five and a few one dollar bills, dangled out of a small square window cut from one-inch-thick bullet-proof glass.

Jim Miller, 46, owns and operates Philadelphia Scrap Metal, located at 2069 E. Silver St. Business has been decent since Miller took over the company about nine months ago, continuing that particular property’s lineage as a scrapyard. He employs about five, full-time men, most of whom have been working at that same yard under different names for most of their lives.

Tex Hyman, 53, a short and intense man in charge of the scale, has been there for 18 years. Stacey, the main forklift driver, has been an employee for 20 years. Karl, a quiet man often using some of the loudest tools, has been at the scrap yard for 23 years. Bob O’Brien Sr., 52, operates the hydraulic cutter, clipping pieces of steel and iron from aluminum eight hours a day. His son, Bob O’Brien Jr., 30, stands in front of a crusher all day, pressing dozens of bags of beer and soda cans into single, 400-pound blocks. 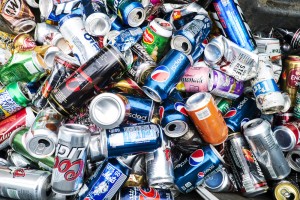 Beyond the business’s razor wire fence Jose Rodriguez, a 31-year-old homeless man, separated the items in his cart. Rodriguez relies on the money he makes scrapping.

“I’ve been doing this for two years . . . there’s no work around. When I not working, I do this,” said Rodriguez as he used some piece of metal and his hard, dirty hands to pry apart and separate the constituent pieces of a small motor.  “Sometimes it’s good, sometimes not. It depends what you find. On a good day, I can make $25, maybe $30.”

Philadelphia Scrap Metal opens at 7 a.m. everyday but Sunday. Miller gives away 70 or more soft pretzels every morning for the scrappers, who line up at the gate with their shopping carts. However, his generosity is not the reason why they come to the shop. They are there to make a living one piece of scrap at a time.

Laughter could be heard from the sidewalk outside of the homeless shelter known as My Brother’s House. A large blue-and-white-tiled mural stretches along the side of the building, along with the words, ‘Home away from [continue reading…]