At 92 years old, Russell Goudy still walks the creaky wood floors of his hardware store with obvious intent. When customers express doubt about finding an item, he guides them to the appropriate aisle, using his thin, long cane as a pointer to prove them wrong and, more importantly, to reaffirm his reliability.

Goudy maintains that creating relationships with his customers has allowed his store, Kilian Hardware, opened by his aunt and uncle in 1913, to thrive.

“You want them to get something a little extra in service that they don’t get anywhere else,” he said.

Goudy’s near 100-year-old store, at 8450 Germantown Ave., is a testament to the business culture that has defined the avenue for years.

David Contosta, in Suburb in the City, described early Chestnut Hill as “a strip village, with its houses, shops and stores strung out along the main road.” That road would eventually become known as Germantown Avenue, and would allow both sellers and consumers to make transactions sans the cumbersome travels to other parts of the city.

Years later, Germantown Avenue continues to serve a similar purpose. But the direction of the business landscape is undoubtedly changing. Businesses have come and gone, and proposals for new development projects are in the works.

Hired in July, Laurie Wightman, Chestnut Hill Business Improvement District’s retail recruiter, is charged with scouting out and retaining business for the neighborhood. The position was created in 2010.

In part, Wightman deals with the empty spaces that line the avenue in the well-to-do, historic neighborhood. Retailers such as Gap, The Children’s Place and Talbots closed along the avenue in recent years. Borders also closed up shop.

Currently, the vacancy rate of the 125 commercial real estate spaces on and just off the avenue stands at 12 percent, meaning 88 percent of the spaces are occupied, Wightman said. A few years ago, that number was larger, Wightman said, although she was unable to provide a specific number. 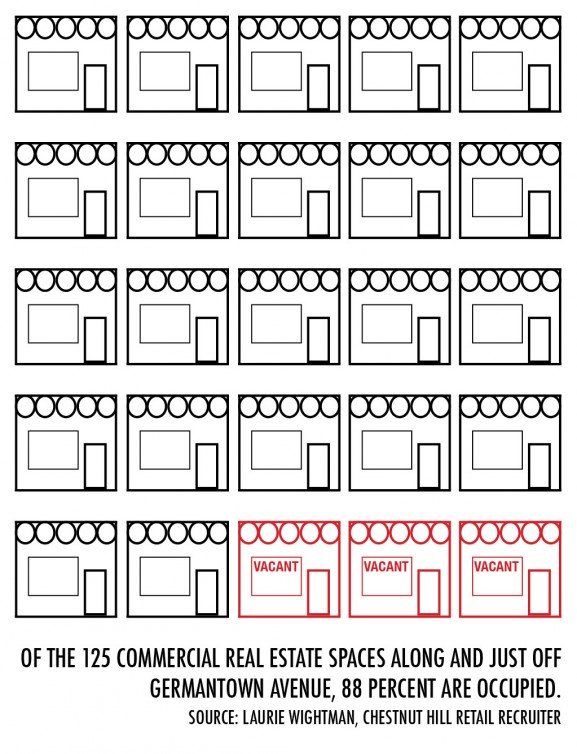 “I think [the vacancy issue] was a combination of the recession but also not having the right retailers here,” Wightman said.

“When you’re assessing any main street community and you’re seeing what amount of space is filled versus what is not, a healthy balance is exactly where we are right now,” she added.

The round of vacancies wasn’t the first the avenue faced; in the 1950s, the vacancy rate stood at roughly 30 percent, according to Contosta’s book. That period coincided with initiatives to revitalize the area by Lloyd Wells, a controversial reformer in the neighborhood at the time.

During those years, storefronts on the avenue were remodeled to help secure the area from the decay seen in neighborhoods like Germantown, said Contosta, currently a professor at Chestnut Hill College.

“I would say the avenue served local people until the 1950s or 1960s up until Lloyd Wells came to town,” he said. Then, attracting customers from outside the direct neighborhood became a priority.

Attracting customers from nearby areas paves the way for businesses with target audiences that may not be in line with the neighborhood’s demographics, she said. Many describe the neighborhood as quaint and preppy, she said.

Still, Wightman said she has community interests in mind. She hopes to see some more high-end restaurants, a children’s clothing store and high-end retailers for men and women, she said.

“Chestnut Hill is what it is. It’s a beautiful, charming town. I will never take that away from here,” Wightman said.

In fact, the community is what attracted Nancy Smith to open the fourth location of her business, A Taste of Olive, at 8505 Germantown Ave. last month.

“We’ve always wanted our business to be in a community, rather than in a mall or something,” Smith said.

Niche businesses have thrived for many years on the avenue. But some question how much those types of businesses can serve the neighbors like the avenue once did.

“Goods in Chestnut Hill tend to be relatively expensive,” Contosta said. “I suspect you can’t prove that even Chestnut Hillers are…shopping there the way they used to. They’re going to shopping centers and shopping malls.”

Residents express the need for certain businesses; a convenience store, a book store, a movie theater, to name a few.

Restaurants with more moderately priced menus wouldn’t hurt either, said Joe Waldo, a consultant who has lived near the avenue for 25 years.

But Waldo still appreciates the luxury of the avenue lifestyle, despite the voids.

“I walk to the barber shop, I walk to the cleaners,” he said, explaining the neighborhood’s attraction when he moved to the city.

He’s a loyal customer of Frank’s Barber Shop, at 8140 Germantown Ave., which has become a legend on the hill.

“I get Frank a cup of coffee every weekend,” he said.

Frank Salemno, the storied 90-year-old barber, opened his shop more than 70 years ago for $40, the chairs, mirrors and traditional barber pole fixture included, he said.

While Salemno received an offer to sell the shop for $500,000 to a local developer in recent years, he said, he’s staying put.

In the same vein as Goudy’s perspective, Salemno is adamant about giving customers something they can’t get anywhere else.

During haircuts, Salemno tells stories about the Purple Heart he received during World War II, his subsequent homecoming and how he married “the prettiest girl in Chestnut Hill.”

He’s also kept consumers coming in the same fashion that Wightman hopes for.

On a recent weekend, Ryan Traversari, 34, of New York, visited the shop, as he’s done multiple times before. He gets his haircut there whenever he visits his sister in Chestnut Hill, he said.

“I can get the same haircut [elsewhere], not the same atmosphere,” he said, recalling his first time at the shop. “I thought, ‘One of a kind.’”

Our special reporting on COVID-19 may focus on communities outside Philadelphia, as many of our student journalists are now located outside of the city. Instead, our reporters will cover how the coronavirus is impacting their [continue reading…]

“I want to encourage people who live in and around Philadelphia to do something that I think we don’t do enough of, and that’s being proud of your city and being a cheerleader and a [continue reading…]

Walking down Germantown Avenue in Chestnut Hill, the Pennsylvania General Store fits comfortably alongside the local boutiques, restaurants and coffee shops. Just six months ago, the store owned by Michael Holahan and his wife only [continue reading…]