With Philadelphia Education Fund’s College Access Program, students at Kensington Creative and Performing Arts High School are equipped with the tools they need to further their education.

The program—which received federal funding in 1990 with the intent to serve low-income, first-generation college students with the ultimate goal of ensuring they enter college and successfully earn a degree—allows students to work directly with coordinators who assist them through the entire college application process, including finding a suitable college, revising their college essays and applying for financial aid.

Due to funding constraints, the College Access Program closed two of its centers and re-evaluated its plan to deliver its services to students—before and after graduation. With the intent to improve the quality of public education, Philadelphia Education Fund takes a multifaceted approach by addressing not only students directly through the College Access Program and granting $1 million in scholarship money annually, but also the system as a whole through continuing re-evaluations. It also provides community outreach through its public College Access and Success Center, located in the Gallery mall.

Kim Stephens, vice president of postsecondary opportunity, has been working for Philadelphia Education Fund’s College Access Program for two and a half years.

“We are actually able to do a greater job and serve more people by doing outreach,” says Stephens. “As opposed to having centers in isolated communities where only a certain portion of the community would go to.”

Having a central location available to the public is one of many ways that Philadelphia Education Fund’s approach differs from other similar programs.

“We want to service them throughout their continuum,” says Stephens. “Students can go to the Gallery College Access Center for the rest of their lives. They can utilize the computer lab. We will provide them with support and services and resources as it relates to completing school, graduating, securing a career and anything else that they may need to help support them.” 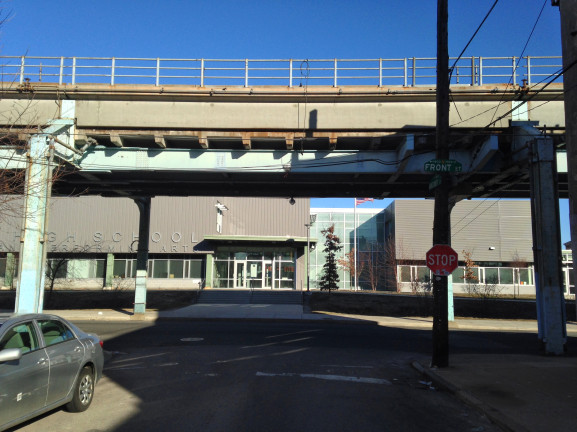 “If the students didn’t have a center where they could come in and just hang out and use the computers, I feel that many of them would just push things to the side,” said Rodriguez. “I’m on their backs. When I see them again in the hallways, I give them reminders. Or they come in, they see my doors are always open, so in between classes they drop in. This is like their safe zone.”

Rodriguez guides her students to a number of post-secondary options, either a two-year or four-year plan, or trade school. Some of her students, like 18-year-old Daesha Francis, plan to attend medical school after completing a four-year degree.

“I was new to all of this,” said Francis. “If it wasn’t for College Access, I would be kind of going nowhere. [Jocelyn] really helped me out to just narrow down what I wanted to do.”

In 1999, only 10 percent of Philadelphia School District graduates completed college according to Philadelphia Education Fund. In 2010, after assisting students with “Last Dollar Scholarships,” that number jumped to 45 percent and continues to grow. 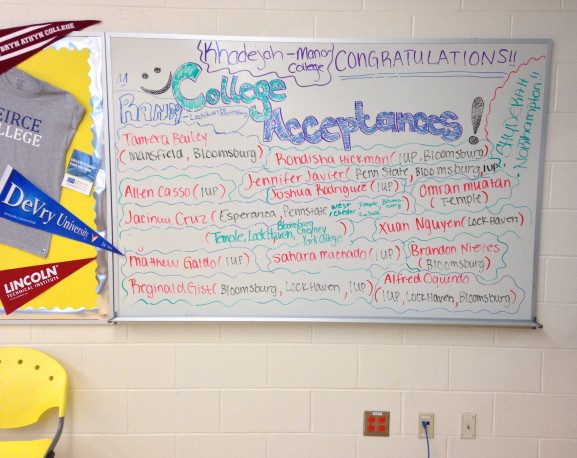 Stephens and her team are taking action to form a dialogue between high school and college to tailor and align the curriculums between the two, which she says will ultimately better prepare the city’s students for higher education.

“We’re really excited about our new approach to the alignment and just really having the dialogue and having that opportunity,” she says. “I think that’s been a missing element in the educational system for quite some time.”

For those who don’t have the College Access Program in their high school yet, Stephens urges all who are interested or have ever had a thought about going to college and need assistance or even just some motivation to drop by the College Access and Success Center in the Gallery mall, which is open throughout the week with extended hours on Tuesdays and Thursdays.

“Everything we do is free,” says Stephens. “We just really want to be of service to the community and we invite anyone to come down and visit us.”

https://vimeo.com/75906341] Education does not come just from textbooks anymore. Schools in Philadelphia are taking a different route and are taking students outside of the classroom in order to get the most out of their education. [continue reading…]

Olney: This Week In The News — Scholarships, Remembering The Clock Man And More

In case you missed it, we found a few places where people were talking about things happening in Olney: Rowan R.A.I.S.E. Takes High Schools to Med School – The Rudman Foundation not only sponsors Discovery Days [continue reading…]