This summer, Shakespeare in Clark Park, a Philadelphia theatre company, will present its next performance, “Henry IV: Your Prince and Mine,” in collaboration with Team Sunshine Performance Corporation. The production will show from July 30 to August 3 at 7 p.m.

Every year, Shakespeare in Clark Park produces a Shakespeare play and presents it for free at Clark Park in West Philadelphia. This year, the public was invited to get involved and be part of an epic battle scene that will feature 100 people. 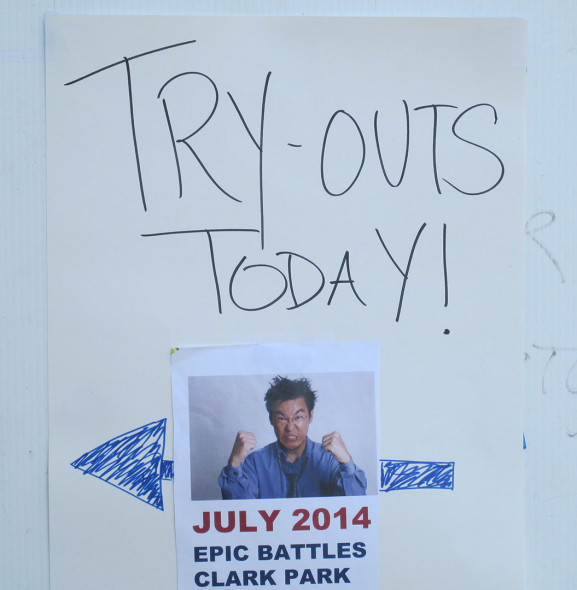 “When I heard there was going to be a 100-person fight scene, I had to get in on that,” said Thaddeus Mayfield, a student at the University of the Arts in Philadelphia.

Mayfield was one of fourteen people who showed up to the first rehearsal, which also served as a tryout, for the scene held by Team Sunshine Director Benjamin Camp at a church in Old City.

“I’ve been loving stage combat for the past two years ever since I started doing it in college classes, so I thought I’d try to put those skills to use and do something productive with them,” he said.

The participants varied in their levels of acting experience. No experience was required but some considered it an opportunity to pursue long-lost dreams.

“I’m just a frustrated actress,” said Tonia Hoffman, a local resident who thought the experience provided an ideal platform for the career she once dreamed of pursuing.

Though Hoffman joked about signing with an agent once the production is over, her real intention for the show is just to have a good time.

“(I hope to) meet some new people and have some fun,” she said.

For Camp, the important thing was to attract enthusiastic people from around the community to be a part of something that, in the past, they may have been watching from the sidelines. Frank Innes lives right next to Clark Park and has watched most of Shakespeare in Clark Park’s productions.

“I thought it would be fun to be in the play, rather than just watch the play,” said Innes.

Like Mayfield, Innes has no formal experience besides singing in his church choir.

“I took voice lessons a long time ago and I like to sing a lot … but I just thought this would be a fun thing to do,” he said.

Directed by Alex Torra, this summer’s play is about a massive rebellion against a drunken prince in England. The tension culminates in the fight scene, which was the subject of the first rehearsal.

Since its founding in 2005, Shakespeare in Clark Park has been a prominent attraction in the community.

“They’re really a staple to that community and to the park,” said Camp.

In their first production nine years ago, the company attracted 2,000 viewers over the course of four performances of “Twelfth Night.” Since then, they have grown and have come to expect an audience of more than 1,000 people on any given Saturday night performance.

Wendy Staton, a member of the company’s Board of Directors, said that she is proud of how far they have come.

“I think we have the right people doing the right things,” said Staton. “The fact that we’ve been doing this for almost ten years now really is a testament to the positive response the community has given us and the support they’ve shown.”

Staton added that it’s all about spreading art and making a difference in the community.

“Our goal is to spread the gift of theatre to the Clark Park community,” she said.

Mike Zizzi, a West Philadelphia resident, takes his family out every year to watch the event.

“It’s a nice thing to do as a family … The kids like the picnic part of it and my wife enjoys the production. She was a theatre major in college,” said Zizzi.

He added that he is always impressed by the quality of the show.

“They’re pretty good,” he said. “It’s obvious that they put a lot of time into it.”

The production will highlight a busy summer for Clark Park. The annual Clark Park Music and Arts Festival will start on June 21 and it always serves as a popular venue, both formally and informally.

– Text, images and video by Mark McHugh and Nicole Gattone.