Kensington Avenue, once the area’s centralized strip of commercial business, is still bustling to this day. New faces, new businesses and new wares are sold up and down the avenue.

The first mile of Kensington Avenue, which spans from York Street to Allegheny Avenue, echoes the emptiness left behind by those who have left the area. Many storefronts lay bare and possess a ‘For Rent’ sign, while others seem to have not been touched as time passed and owners moved elsewhere. 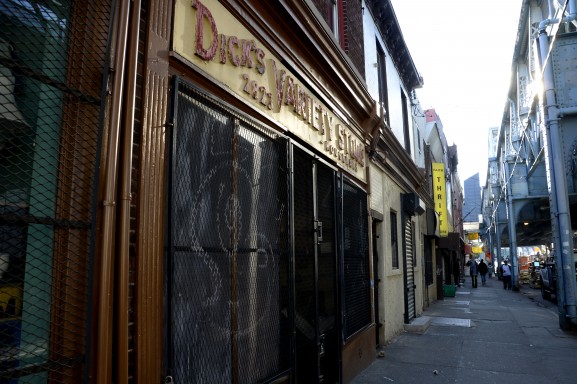 On both sides of Kensington Avenue, between York Street and Allegheny Avenue, lay 191 storefronts including: restaurants, bars, clothing stores, and other commercial businesses. Of these storefronts, approximately 57 are vacant without a new owner to fill its once used space. Ultimately about 30 percent of businesses lay bare and unused.

The root of this exodus seems to be unclear to many residents and business owners. Some residents blame drugs, others pass the blame to government neglect on the area, and some blame it on the crime rate of the area driving patrons away. 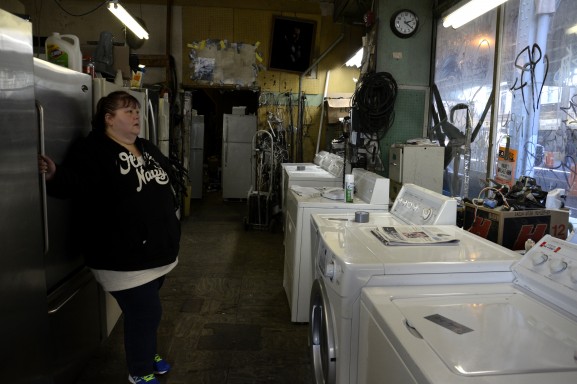 Suzie Imbrenda, owner of Phil’s Appliances, has been living in Kensington her entire life. She said she had witnessed the fall of the economy as illegal activities began to become more and more apparent.

“It [the area] started changing around 25 years ago, we saw the drugs starting to appear,” said Imbrenda. “Then they started doing graffiti and breaking windows, and then the economy went downhill from there.”

In 1982, two social scientists created a theory that many programs in Philadelphia and other urban environments use to try and understand the plight and downfall of cities. The broken windows theory states that once vandalism is seen in an area, it will promote other forms of violence and crime, which ultimately leads to the decline of economic and social conditions of an area.

Kensington Avenue was once home to many businesses and a community that was engaged with each other. Businesses were abounded and many appliance stores, manufacturers and restaurants lined the strip finding their home in a robust neighborhood.

With a crime rate 28 percent higher than the city of Philadelphia’s, according to the U.S. Census Bureau, many businesses have migrated elsewhere. However while the face, population and crime of Kensington Avenue may have changed, a few unwavering businesses still remain.

“My dad opened up here 46 years ago because we lived around here, it was a middle class neighborhood and it was really nice,” said Imbrenda. “In the beginning we were the best appliance store and we did so well.” 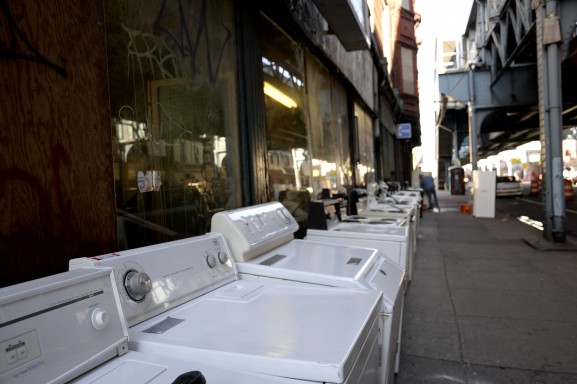 Like other business owners, Imbrenda remained in the location her father chose because it was home and customers relied on their business. As time went on and the area changed, business began to decline and now Phil’s Appliance store has had to change to accommodate to the area.

“We can’t stay open late anymore because you can’t be here when it gets dark, no customers come down here after the sun goes down. That really hurts our business too,” said Imbrenda.

Alongside struggling to accommodate Phil’s Appliances customers, Imbrenda has faced cleaning up broken windows, graffiti and clearing out drug users outside her store.

“Business is bad for us because there are thousands of appliance stores every where,” said Imbrenda. “Half of these other appliance stores are fronts for drugs and other things so they don’t care how much they sell for. It hurts our business.”

Being a reputable family business, Imbrenda struggles to set herself apart and keep her store open. She said she wants to make sure the residents know that they will remain in the area, continuing to sell functioning appliances.

Further up Kensington Avenue just before Allegheny Avenue, rests Widdy Dart Manufacturing. The storefront is brown and unassuming and to passersby it seems to be just another one of those 57 vacant spots. Owner, Joe Marafino, proudly remains in the same location his father-in-law chose 40 years ago. 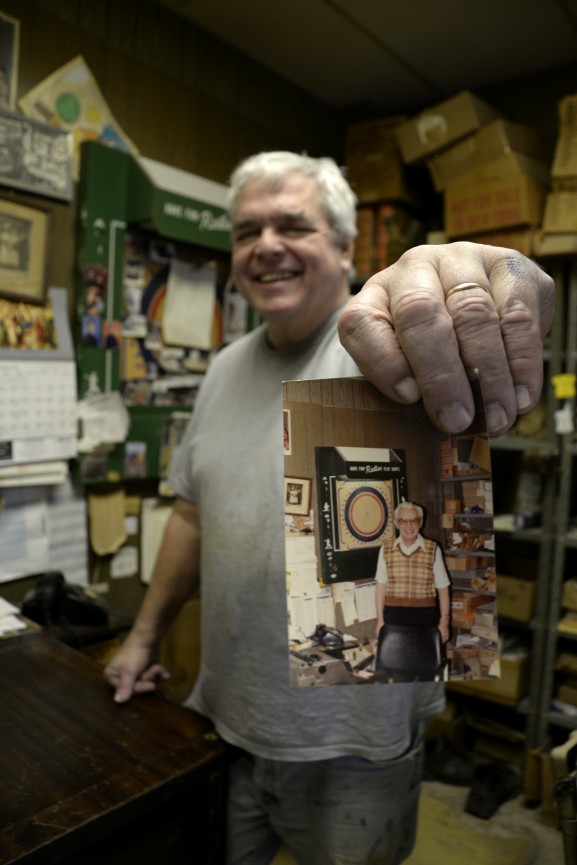 A typewriter is revealed from a compartment in the owner’s desk instead of a computer, a rotary phone rings in the corner, and Marafino’s business partner steadily constructs darts by hand. Marafino has not changed a thing since his father-in-law opened on the avenue and is proud of it.

“There used to be a lot of businesses along the avenue, now they’re all closing down slowly,” said Marafino. “The ones that are left are just holding on to what they’ve got.”

Widdy Dart Manufacturing is known for their handmade darts and dartboards. They have been leading the dart manufacturing industry and the business has been working tirelessly to keep open.

“The electric dart industry knocked us out as well as the area, but we’re hanging on to what we can,” said Marafino.

Businesses that serve its customers are not the only ones to have faced struggles to remain open. Mini marts and clothing stores have also seen the economy wax and wane along Kensington Avenue. 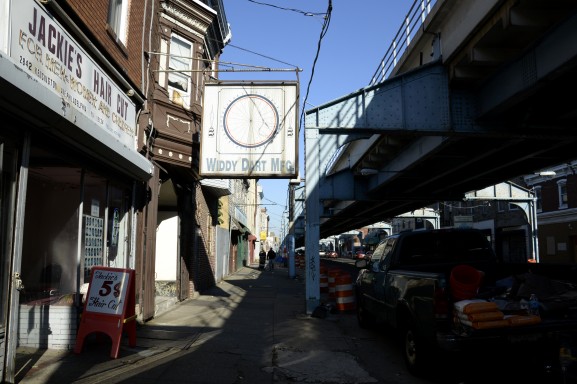 Vincent L., owner Kensington Mini Mart on Kensington Avenue and Huntington Street, has operated his business for more than 10 years. Originally from New Jersey, Vincent moved to Kensington to pursue an interest in opening a business, but he did not expect some days to be as slow as they are.

“This area is by no means wealthy. There is no money and unfortunately the drugs and poverty keep a choker on the area and the ability for businesses to progress,” said Vincent.

Owning a mini mart, Vincent has seen better days than most business owners under the El. However he said he hopes to see the area cleaned up a bit and become fruitful once more.

“Who wants to shop in this area when you have that type of activity [drugs and crime] everywhere,” asked Vincent. “I hear of plans to redevelop this area, and I’m really hoping for that for everyone’s sake.”

Vincent and other business owners recognize the commonality they share with everyone else along Kensington Avenue. They all want to see the area revitalized and the economy to begin to boom once more in Kensington. 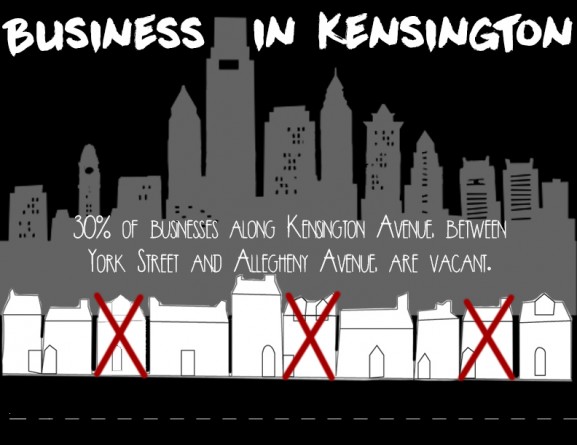 There are already signs of improvement within the area with many outreach programs heavily active under the El and property values significantly increasing in Kensington. According to Trulia, property value in Kensington has increased by $40,000 from August to November 2014.

With real estate starting to flourish, residents can only hope that new businesses will take up the many once-forgotten storefronts and fill them with new opportunities for the area.

“The area is starting to change for the better. The cops patrolling the area are pushing the drugs outward and that’s helping our business,” said Imbrenda. “Hopefully all the new development in the area will help as well. As for now, it’s all sneakers, haircuts and drugs under the El.”

Tyrone Akins and Brian Holland knew that they didn’t want to be in the pharmaceutical business forever. At the same time, they knew that if they opened a business that it had to be unique [continue reading…]

Logan: Hats Off to Tillman’s Boutique

Settled at the edge of Logan’s Broad Street shopping district, Tillman’s Boutique has impeccably dressed the community from head to toe since 1997.  Noted for its unique collection of hats, Tillman’s has served as a [continue reading…]