Philadelphia education advocates, parents and students braved the numbing cold on Nov. 18 to gather in room 400 of City Hall for a hearing organized by the local nonprofit Public Citizens for Children and Youth (PCCY). 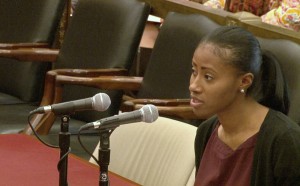 “Public education is not a privilege but a right,” said Jamira Burley (right), executive director of the Philadelphia Youth Commission. “The single greatest investment that a community, city, state and nation can make is the education of the citizen.”

“On the one hand I’m worried that this committee may not enact the changes needed based on the findings, but another part of me is hopeful that you might feel a sense of urgency about what you are hearing across the state and in our city today,” said Krug (below). 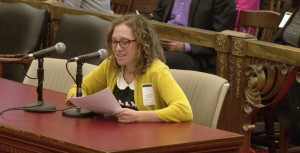 In 2011, the Pennsylvania state legislature stopped using a funding formula for school district fund allocations. The Basic Education Funding Commission is responsible for coming up with a new formula by June 2015.

In the meantime, districts across the state have relied more heavily on their local property taxes, making poorer neighborhood schools suffer the most.

“Homeowners in Philadelphia are far more burdened than homeowners in surrounding districts,” testified Anne Gemmell of PCCY. “In Colonial schools, we’re paying less in taxes but enjoying more in resources.”

Gemmell is also a parent to three children; her two daughters live with her in Whitemarsh and attend school in the Colonial School District, and her son is a student at a Philadelphia public school. According to Gemmell’s research and data, Colonial district homeowners pay just over $12 for every $1,000 of property value. However, in Philadelphia, homeowners pay $20 for every $1,000 of property value, she said.

“Why does a child in Lower Merion have twice the resources behind him than a Philadelphia student has?” asked Debra Weiner, a Quakertown resident. “What you get often depends on the political connections of your legislator.”

Some Philadelphia schools are lacking the most fundamental supplies and teachers find themselves spending hundreds of their own money to buy paper, pencils, and notebooks for their students. Sarah DeMaria was a first grade teacher at Bethune Elementary for five years until she decided to leave for Glenside Elementary in the Cheltenham School District.

“I think that minorities and economically disadvantaged kids were mistreated as a consequence of the overall resource allocation,” David Hornbeck, the former superintendent of the Philadelphia School District, said in a phone interview. “Funds were tilted towards schools with greater proportions of white kids and students from better economic circumstances.”

Increasing funding for the benefit of poorer school districts has been met with some resistance – partly in response to poor academic performance and, in some cases, alleged financial mismanagement. State Rep. Dan Truitt of Chester County stated at a House Education Committee in 2011 that “constituents in my district are getting a little tired of dumping money into this rat hole in Philadelphia.”

PILCOP, along with the NAACP and the Pennsylvania Association of Rural and Small Schools (PARSS), filed a lawsuit on Nov. 10 against the state Legislature for failing to fulfill the constitutional obligation to provide students with the resources to meet state-imposed academic standards.

“Every school district has seen an increase of the number of children in poverty. Those students come with greater needs,” said Donna Cooper, the executive director of PCCY. “In buildings with greater than 30 percent of its children on free and reduced lunch, its ability to make any annual progress on the PSSA [standardized test] scores was stagnant.”

Funding cuts have exacerbated already existing inequalities between students in various counties. Seventy percent of the school districts have had to increase their classroom sizes, 44 percent have cut their extracurricular activities and 35 percent eliminated their tutoring programs, according to a survey conducted by the Pennsylvania Association of School Business Officials. The Philadelphia schools began this academic year with 6,321 fewer staff members than in 2011, district data shows.

“Our young people are counting on us, young people who have no say in the ZIP codes and communities that they are born into,” Burley said. “We should not allow those zip codes to define their futures for the rest of their lives.”

Philadelphia City Council convened for its first meeting of the fall session Thursday, Sept. 12, 2019. All 17 members were in attendance, except Councilmember Mark Squilla who was granted leave.  Three pieces of legislation proposed [continue reading…]

Amanda Bowman always imagined herself as a mother. When the time came for her to have children, she was presented with two surprises. The first: she would have to raise them as a single parent. [continue reading…]

April is more than just the beginning of spring, it is Sexual Assault Awareness Month. WOAR, a Philadelphia nonprofit, is leading the charge to prevent sexual violence in the area. [continue reading…]