The intersection of Lawrence and Jefferson streets may seem like a regular corner, but between noon and 1 p.m. a line will form in front of a nondescript apartment window.

Members of the community will patiently wait outside The Sister Peter Claver Catholic Worker House for the free, hot lunch it provides Monday through Thursday for those in need.

Depending on the weather, The Sister Peter Claver House will provide up to 250 meals per week. These substantial lunches usually include a main course of casserole or meat along with a side of vegetables, buttered bread, hot or cold tea, and a dessert. 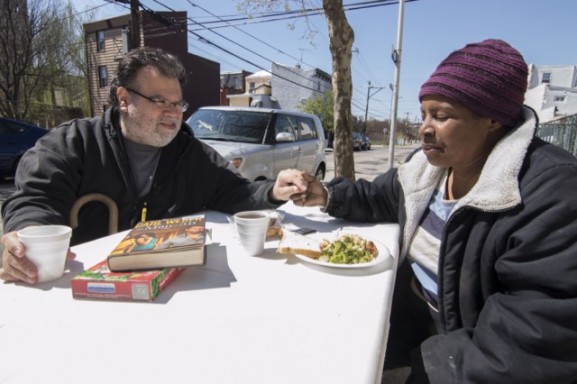 Lunch is different every day because the food donations come from several places around the city. Local places such as St. Francis Inn and Kaplan’s Bakery make the service possible with their generous contributions.

Longtime friends Gene Schneyer and Mike Haas have been volunteering their Wednesday afternoons to serve lunch at The Sister Peter Claver House for a little over a year. They discovered the opportunity through their local parish, Saint Genevieve’s, located just outside of the city in Flourtown.

“People say Wednesdays are the most popular day because I bring in Tastykakes, but I don’t know if that’s true,” said Haas (below, right). 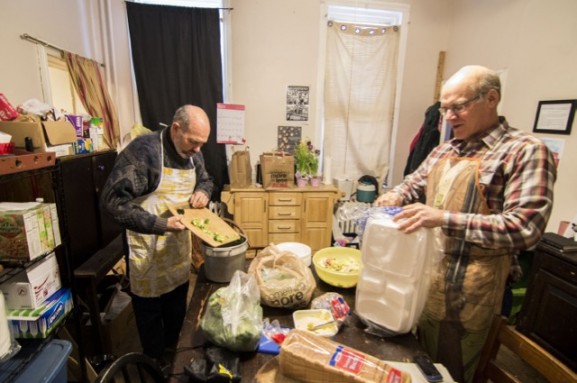 Philadelphia has one of the highest poverty rates in the U.S, at 26.3 percent in 2013. South Kensington also has one of the lowest median household incomes in the city at $23,509, according to Pew’s 2015 State of the City report.

The neighborhood is rapidly gentrifying. Real estate prices have increased more than 15 percent between 2011 and 2015, the report said.

The Sister Peter Claver House, at 430 W. Jefferson St., is a tool for stability within the community. It has served its neighbors since it was founded in 1988 when two women came from a Los Angeles Catholic Worker House to Philadelphia.

Patti Burns and Susan Dietrich started The Sister Peter Claver House as an after-school program for children and a community garden, La Finquita (“The Little Garden”), which still exists one block south, at Master and Lawrence streets. 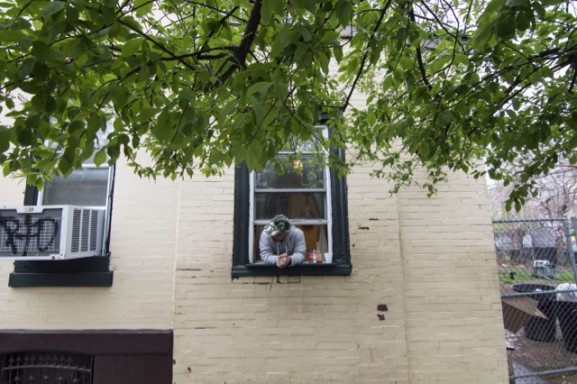 South Kensington Community Partners is a driving force in the movement of making resources more accessible to the community. The SKCP supports La Finquita, along with other neighboring gardens. Its goal is to revitalize the community using the benefits of the land and determination of the people who inhabit it.

In 1933, Day and co-founder Peter Maurin started the Catholic Worker House in New York with the idea of providing social services and hospitality to those who otherwise might not have access or exposure to it.

The Philadelphia house was named after Sister Peter Claver, who donated $1 to help publish the first edition of Day’s newspaper. Claver was a close friend to Day and she served as a religious sister for eight decades.

If official titles were used within The Catholic Worker House, Beth Centz would be the director. Centz manages the free lunch service and an after-school program – along with paying the bills – since she’s the only one who resides in the house.

“We serve around 75 [people] some days, which is a lot coming out of a little, tiny kitchen,” said Centz.

In addition to the free lunch service, a clothing drive is held once a month for families in need of new or seldom-worn clothes. Also, a weekly Rosary Circle meeting will begin this season as part of their efforts to present fellowship for neighbors and friends.

The after-school program runs Mondays, Tuesdays and Wednesdays to help neighborhood children between the ages of 5 and 12 with their homework. 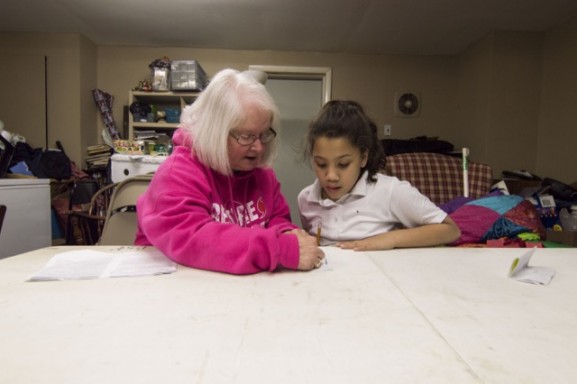 https://vimeo.com/40006579] An organization exists in University City that teaches neighborhood children about bicycling. Neighborhood Bike Works, located in the basement of St. Mary’s Church in the middle of the campus of the University of Pennsylvania, […]

At Roxborough Community Acupuncture, lead practitioner Dave Schiman has made the Chinese healing art of inserting tiny needles into energetic pressure points affordable for his neighbors. Tucked away on the second floor of a chiropractic […]

The Rev. Cynthia A. Jarvis has been the minister of the Presbyterian Church of Chestnut Hill since 1996. She has been a leader within her ministry changing the way people in Chestnut Hill view the […]