If you were to sit on the steps of the Philadelphia Museum of Art on a nice day and watch the people climb to the top for their daily workouts, you may find it hard to believe CountyHealthRankings.org ranked Philadelphia the least healthy county in Pennsylvania this year.

This is not a one-year slip up — this is now the fifth consecutive year that Philadelphia has fallen to the bottom of the list.

The rankings are performed through collaboration between the Robert Wood Johnson Foundation and the University of Wisconsin Population Health Institute. These two organizations gather data sets from a wide array of national health organizations to determine overall population health throughout the counties of each state.  The data is formulated into eight categories and Philadelphia is last in seven of them.

This ranking is of no surprise to Temple University Public Health professor Dr. Sheldon Watts.

“People in cities tend to live busy lives, that is the impression of an urban society, and the first thing to get cut out of those busy lives is physical fitness,” he said. “Because in our society, we don’t put a great emphasis on the benefits of physical activity in our daily lives.”

This busy lifestyle, as Watts described it, has resulted in 26 percent of Philadelphians reporting that they did not participate in physical activity within the last month, according to the County Health Rankings.

However, physical fitness is not the lone determining factor in making Philadelphia unhealthy. The city received a Food Environment Index Score of 6.5 on a scale of 1 to 10,  while the state average was a 7.7. This score is based on things including a population’s access to healthy foods.

“In a densely populated area where more people tend to regress towards the mean, especially in the United States where over 70 percent of the population is overweight, and over 35 percent are considered obese, often times in cities, people become more predisposed to these outcomes,” Watts said.

The city is not turning a blind eye to these problems however; in 2010, the Philadelphia Department of Public Health started the Get Health Philly program, which was intended to bring Philadelphia into a new era of public health. The fitness and health initiative is an attempt to unify the various parts of the spectrum that can contribute to solving such issues.

The program, which is now in its sixth year, works with local food sources in neighborhoods around the city with the goal of making healthy foods more accessible.

“We try to build healthy neighborhoods and environments that, in turn, help people to be healthy,” Amanda Wagner, program manager at Get Healthy Philly, said. “We have many cross-cutting initiatives. Some of the Get Healthy Philly programs related to nutrition and physical activity include community food access efforts healthy food in corner stores, lower salt in Chinese take outs, more farmers markets and SNAP (Supplemental Nutrition Assistance Program) programs.”

In Get Healthy Philly’s most recent annual report, the program reported that illness related to obesity and smoking in Philadelphia had been the leading cause of death and disability in Philadelphia over the past 10 years, with a staggering tally of 45,000 death over that time frame. 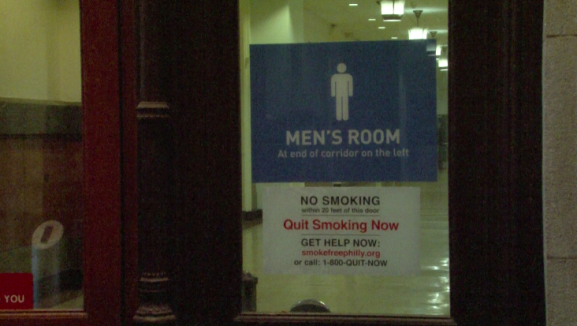 In response to these numbers and with political collaboration, the city has passed a $2 per pack cigarette tax as well as two e-cigarette ordinances.

With all of these programs taking place, however, it is reasonable to ask why these programs have yet to move the needle in terms of Philadelphia’s ranking within the state.

Matt Wray, a sociologist professor at Temple University, has considered this question.

“The idea behind initiatives that Philadelphia has undertaken is that we can just nudge people to take advantage of healthier environments,” he said. “The cigarette tax, for example, makes it more difficult to do something. This is how they are trying to get people to change the environment.

“Even with these programs in place, there remain fundamental barriers to Philadelphians being healthy across the board, and that is poverty.”

According to the same Get Healthy Philly annual report, there is a strong link between poverty and poor health for individuals and with 25.8 percent of the city living in poverty, according to the U.S. Census in 2015, there remains a lot of work to get done.

The city, though, does remain active through the Get Healthy Fitness program. According to Wagner, the Philadelphia Department of Public Health has a five-year strategic plan to focus on several specific areas: women’s and infants’ health; sexual health; tobacco control and obesity prevention; and environmental health.

Philadelphians pursue health and wellness in a variety of ways. Trends come and go as people try new things and officials implement new laws to help keep people fit. Here are a few things you might not [continue reading…]

Strawberry Mansion: Health and Happiness Thanks to Golf

Ever since he was a caddy for middle- and upper-class white men in 1950s, Roosevelt Wilmore has been in love with the game of golf. “You can call it a drug. Whatever it is, I’m [continue reading…]

On any given day Steven Reich is looked upon by a classroom full of eight year-olds for guidance in math, reading or writing. At the same time, there are 27,000 adults following Steven on Twitter for guidance on [continue reading…]