In a fight with life, Josue “JD” Rivera found himself heading down a scary path that all too many young adults find themselves on.

Rivera was a gang leader in California, face with two outcomes if he didn’t make a life change: death or incarceration.

“Life was rough but that wasn’t something that I wanted to do,” Rivera said. “It wasn’t that I wanted to be tough, that was life. Our parents didn’t take care of us, we did what we had to do to survive.”

Rivera was in the 18th Street Gang, a gang that he soon became the leader of. He knew it was not the life that he wanted to lead.

With no true place to call home, he moved around California.

“I was all over the place, because of what I was doing,” Rivera said. “The things I did back then, I’m not proud of, I don’t brag about it. It was a different life, but it wasn’t a good one. But it made me the person I am today, so thank God that I had to go through that because without it, I wouldn’t be as strong as I am today.”

His mother, Sarah, gave birth to Josue in Puerto Rico, but then moved to Brooklyn before he was 2 years old. Rivera lived there till the family moved to California when he was 11, and that is when the gang violence truly began.

“It [California] was supposed to be better, but it was jumping out of the frying pan and into the fire,” Rivera said. “I started going to high school. I was picked on, you had no choice but to retaliate. You could be a victim or do what I do, fight back, cause I’m not just going to get pushed on.”

By then, Rivera developed a reputation as a fighter and found himself in a juvenile detention center.

“He was always the leader of those types of things,” his mother, Sarah, said. “I had to stop him from hanging out with the wrong people.”

For Rivera, change came when he met the love of his life, Lymari.

She was 19 when they married, Josue was 27. She became his guiding light to a new life.

“I’m very proud of who he is now,” his mother said. “He is a wonderful father and a wonderful husband. Everything he has done, he has done alone without any help.”

Rivera now has three children, and a happy family life with Lymari in a home in South Philadelphia. He is also the proud owner of Warrior Boxing Gym, located nearby at the corner of 10th and Mifflin streets.

It wasn’t any easy trip to South Philly. The couple made a four-year stop in Puerto Rico. A promised job in Philadelphia lured the duo back, but as many experience, some things are too good to be true.

Unemployed but determined, Rivera again fought through bad times. But this time his family was by his side.

In addition to running his gym, Rivera now spends time in the boxing ring. While his record stands at 2-7, it is about much more than the wins and losses. 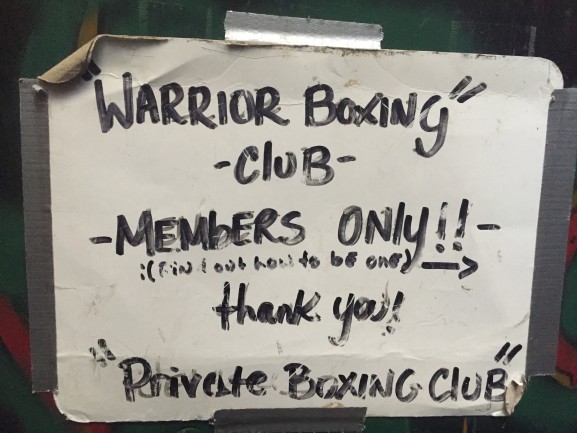 It is about a dream of becoming a professional boxer that has quickly become a reality. At age 34, he considers himself to be in peak physical condition and wants to help others achieve their goals.

Kurt Hodgins, a 24-year-old Philadelphia University of the Arts graduate, said he has dropped everything to become a coach at Warrior.

“So far in life, (Rivera) has been the only individual to be 100 percent supportive of me,” Hodgins said. “I’ve come from a supportive family and and friends, but there are always those doubts with other people. For whatever reason, he believed in me.”

Hodgins is not alone. Many other people have come to Rivera and Warrior in the hope of becoming professional boxers.

“JD works with everybody here, regardless of status,” Griffin Strader, of Center City, said. “Whether you’re a pro fighter, an amateur fighter or whatever you are trying to do, he will work with you to whatever goal you are trying to get.”

The list of people who use Warrior on a frequent basis is extensive, but one particular group is very present at the gym, especially in the afternoons — children.

At any given time, there will be as many as five children punching a bag or sparring with Rivera.

Rivera recently fought his ninth professional fight and lost by knockout 59 seconds in.

That doesn’t matter though, he said.

“Win lose or draw I’m gonna do my best and I’ll be proud of what I’ve done,” Rivera said. “Because I’m doing what others haven’t done and at my age, I’m further than guys who have been boxing their whole lives.”

Sometimes the smallest of connections can lead someone back home.

Zan Alejandro first came to Philadelphia to attend Drexel University in the early 1990s but then settled in New York with frequent trips to Puerto Rico.

It was during those trips to Puerto Rico when Alejandro found a reason to reacquaint himself with Philadelphia — a friendship with Josue Rivera. 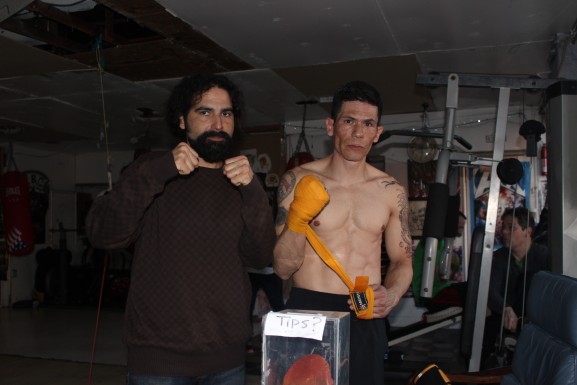 “Philadelphia has always been a second home to me,” Alejandro said. “So it’s natural for me to be around here no matter where I am. It is of no matter, even if I am two hours up north in New York.”

The two friends met while Rivera was in Puerto Rico, his home before South Philadelphia.

“I’ve been coming to Philadelphia more often because I want to be a part of this Warrior boxing project,” Alejandro, who lives in Brooklyn, said. “I just want to learn the basics of helping someone that’s coming into the gym for the first time and doesn’t have a lot of experience.”

Alejandro, who works in event staging, has never boxed, so his time at Warrior is testing new waters for him as well as for his daughter Zariah.

“I want her to have a fitness and fun-oriented lifestyle,” Alejandro said. “I think basically you can’t get any more fun than fitness, and the entertainment that comes behind boxing is world class. You can’t get better than that.”

— Text, photos and video by Aron Minkoff and Jamie Gray.

After almost a decade of business, the owner of Northern Liberties’ North Bowl now has a second location, which opened earlier this year on Feb. 26. Located at 19 E. Oregan Ave., South Bowl is [continue reading…]

Tyrique Glasgow is thirty-two years old and has 11 bullets lodged in his body. One of his front teeth is missing from fleeing a gunfight that broke out near his childhood home. Adolescence could have killed [continue reading…]