Nabilla Ariffin is the community impact director at SquashSmarts, a non-profit academic and athletic program which uses the game of squash to keep kids healthy, in school and on track to graduate.

Since joining the program just six months ago, Ariffin has made an immediate impact in the Hunting Park community and looks to grow the program’s community outreach in the near future.

How long have you been at SquashSmarts and how did you get involved?

I started at SquashSmarts in September of 2016. I got involved when I was an undergraduate at the University of Pennsylvania and I volunteered a few times. We have a sister program in Boston, called SquashBusters, and my sister Nessrine worked for them. That is how I got to know the program.

I heard lots of great things from my sister and I thought SquashSmarts could be something I would potentially be interested in pursuing as a career. 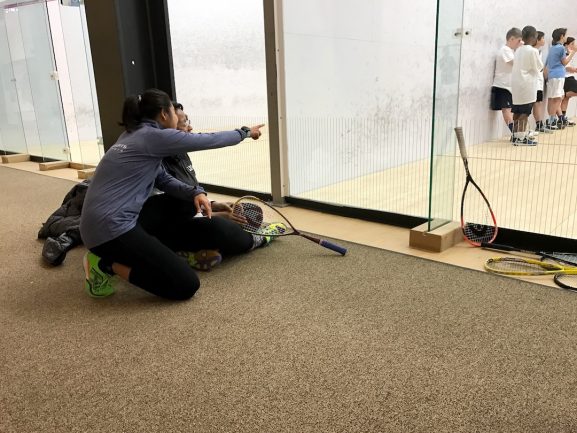 What made you want to get involved with SquashSmarts?

For me, joining SquashSmarts was about getting access to kids. I grew up in Malaysia, where squash is a big sport. Playing squash has opened up so many doors for me. I was able to go to Penn because of squash and I work here because of all the opportunities I have been given.

Having squash here in North Philadelphia is huge and many of the parents have no idea what it is. When they learn that you can get scholarships in college for it, they get really excited.

What is the importance of the Hunting Park community and how does SquashSmarts fit into the community?

Hunting Park is one of those neighborhoods in need of a community center to bring people together. The Lenfest Center (SquashSmarts is located on the second floor) became an anchor for the community, as a place where people could come in and use the facilities. I think it is cool people appreciate having the center and make sure to take care of it.

How important was it for you after being a captain of Penn’s squash team to become involved with SquashSmarts, and how are you using your knowledge of the game to influence SquashSmarts as its community impact director?

I worked as a city planner previously with Philadelphia deputy mayor’s Office of Economic Development and U3 Advisors. The idea of having a mainstay in this neighborhood is something I was fascinated by. This area of Hunting Park is where the economic development happened in terms of safety and in terms of getting people to come in and get exposure to health and education.

Being knowledgeable of the neighborhood is important and we have to make sure SquashSmarts and the Lenfest Center have a good relationship that develops trust within the community. 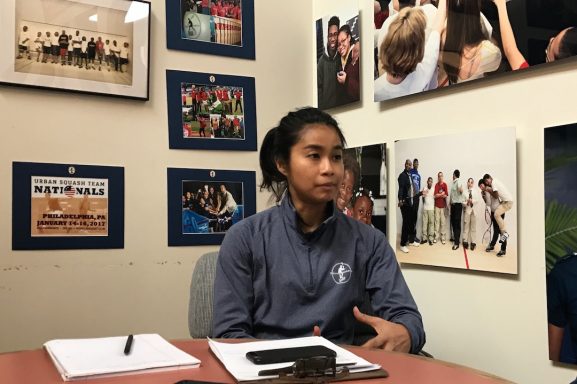 What programs stand out at SquashSmarts and how do they affect the kids within the program and the community?

SquashSmarts is like a family, the kids will come in sometimes when they don’t have school to do their homework and sometimes they come to play squash. We also have community service days during the weekend. This is a safe place for them to come, call their own and be themselves.

You spend a lot of time with the kids here. What is your relationship like with them and how has it impacted you?

A lot of times, I get on the courts and compete with the kids. I think a lot of times it is about building trust with the kids and making sure they feel comfortable talking to us and being a friend to them. 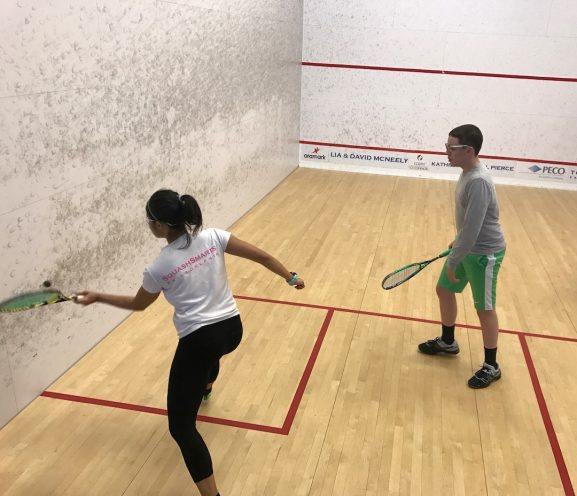 What do you think is the most important thing that comes from what SquashSmarts does?

Squash is primarily the main attraction here. What we want the kids we mentor to learn is leadership, personal development, learning about how to win and lose and what it means to your own personal growth.

We have 64 alumni of the SquashSmarts program since we started that will come back every now and then. Two weeks ago, we hosted the Urban Squash Team Nationals. All 19 programs from across the country came here and we hosted 500 kids in the center. We had most of our alumni come back to help out and offer assistance without us even asking. Having that relationship is something you can’t get anywhere else.

-Text and images by Hannah McComsey and Dalton Balthaser.

The 19th Baptist Street Church reached a crisis point in September of 2011. Hurricane Irene and a small earthquake dislodged much of the exterior masonry and threatened the structural integrity of the building, located at 1235 [continue reading…]

Old City: Miles Butler Builds Community to Save The Planet

As a lifelong activist and a current leader in Philadelphia’s sustainability community, Miles Butler has dedicated most of his life toward spreading knowledge and awareness of environmental protection. Raised in Mt. Airy, Butler lived in Massachusetts [continue reading…]