On any given morning in Manayunk, traffic snakes up Green Lane, sometimes reaching 10 or more blocks from Main Street up to Manayunk Avenue and beyond. Commuters may spend a half hour or more waiting to get out of the neighborhood onto City Line Avenue or I-76 to head to work. 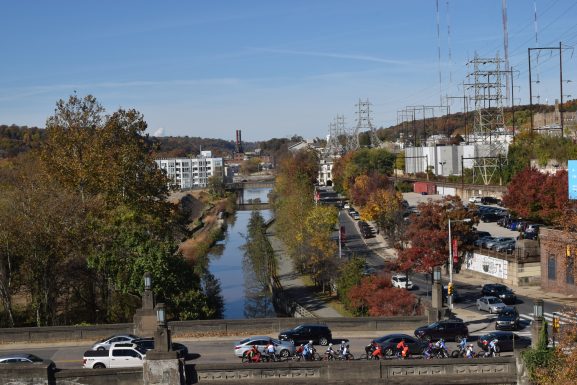 “People often cite that the Green Lane Bridge [pictured above] as an example of how long it takes to get out of Manayunk,” said Josh Cohen, Councilman Curtis Jones Jr.’s chief of staff and Roxborough district office liaison.

In the afternoon, the neighborhood is gridlocked again, this time as residents return to their homes. Street after street, cars are packed bumper to bumper, and drivers are seen riding up and down the hill looking for a spot to park, often to no avail.

The traffic headaches are part and parcel of living in a neighborhood that seems to see no end to a decade of rampant development.

For many, traffic is the most visible consequence of decades worth of overdevelopment. The narrow streets and aging city infrastructure fail to accommodate the growing volume of people driving through the neighborhood everyday.

“I think where we are now, the really big problem with [development] is it is geting to be overdevelopment,” said Irene Madrak, executive director of North Light Community Center, just off Main Street at 175 Green Lane. “Every place is being infilled and the infrastructure, the city, you know, is always really behind on that.”

Issues with traffic and parking are perennial concerns for Manayunk residents, though, and conflicts over development have been recurring for decades. In the 1970s, just as Manayunk was beginning to experience its first demographic shift, the Philadelphia Evening Bulletin published a series of articles which captured the dispute between long-time residents and newcomers from outside.

Click this link to see a visual comparison between Manayunk today and the Manayunk of the past.

Steep hills and the Schuylkill River pose a challenge to potential developers. The solution to these challenges has often been  to develop new commercial and residential buildings on grounds where property already existed. This strategy, though, often increases density, which means more cars and more people in the same amount of space.

“Parking has always been a big issue, and there is not a single day that goes by where I do not hear about parking,” Cohen said. “Sometimes, it takes someone 45 minutes and they wonder how a new development project would affect that.”

Manayunk, once considered a working-class manufacturing and millworker community, has become a hotbed for redevelopment. Homes were typically passed down from grandparents to children for many generations. According to the 2016 American Community Survey, Manayunk had approximately 42 percent of the homes in the neighborhood listed as owner-occupied, down from 51 percent in 2000.

Kevin Smith, president of the Manayunk Neighborhood Council and long-time resident, explained that over an extended period of time, young people started moving to the suburbs, and an increasing number of properties were put up for sale in the neighborhood.

“There is a large rental population here, and that is something that has developed over the last 20 to 30 years,” Smith said. “Society has changed, people move around more, kids don’t stay in the neighborhood they grew up in.”

The Manayunk Neighborhood Council is a non-profit civic association that is dedicated to unifying and educating residents of the neighborhood, as development continues to change the culture and socioeconomic makeup of Manayunk.

“Owner-occupied housing was 80 percent before the 1990s,” said Smith.

Smith claims that developers were able to capitalize on the availability of cheap properties on the market in Manayunk, which served as the catalyst for the massive redevelopment efforts in the area.

“People want to build here, and they are tucking houses into every nook and cranny, some of them make sense, some of them don’t,” said Smith.

“In the 20 years that I have lived in this neighborhood, I have seen a lot of changes,” said Cohen. “We have seen older buildings that may not have been well-maintained being bought and demolished, and having newer, more modern structures [pictured below] in its place.” 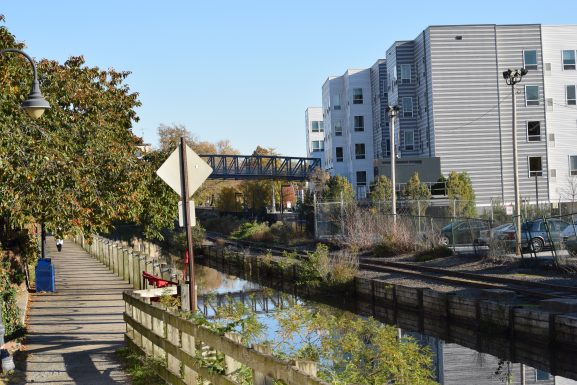 Cohen explained that there are concerns that the neighborhood is being overdeveloped, which has added to the zoning and parking issues and alienated some long term residents.

“There are a lot of long-time residents who are used to a certain way of living and they do not like the increased amount of traffic that a development might bring,” said Cohen. Residents often say that as new developments replace older buildings, the architectural character of the neighborhood changes, often not for the better.

“In some sense, it’s good that we don’t have such stale housing inventory,” said Cohen. “In other senses, one of the reasons why people are attracted to both Roxborough and Manayunk is the historic architecture, and we have seen a lot of that go away in recent years.”

Development issues and tension reached a boiling point when St. Mary of the Assumption Catholic Church closed in late 2015. 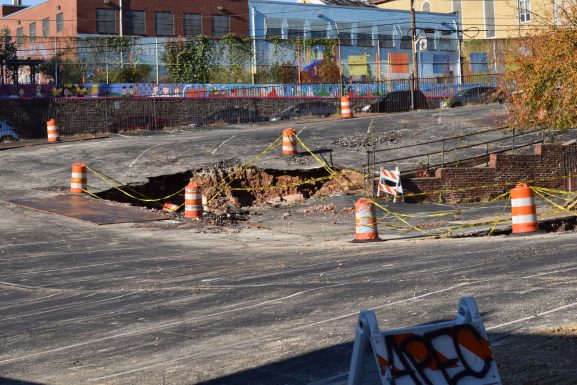 “One of our biggest victories, as a civic association, was playing a big part in getting Councilman Jones to withdraw a bill that would have allowed a 100 unit apartment complex to be built on the grounds of St. Mary’s,” said Smith.

The MNC teamed up with the North Light Community Center to oppose the developer’s original plan to build the apartment complex, which councilman Jones Jr. initially supported.

“Though we have a social action history, we had really stepped out of zoning as an organization unless we would be directly affected as a neighbor,“ said Madrak.

Madrak said that North Light wanted to be involved with the MNC’s effort to fight the development because the St. Mary’s property is adjacent to their center, and the parking issues would threaten the survival of the North Light Community Center.

“We actively worked hand in glove with Manayunk Neighborhood Council; Kevin and I strategized regularly together, and we put a team together and came up with some central themes to address at our meetings,” said Madrak. “A lot of the comments that came back were that people knew something was going to be built; people had problems with the density, the lack of attention to infrastructure in the community when so much is being built, and the traffic issue, which is something that is really land tied.”

The concerns over lack of space in the neighborhood were apparent.

“When you look at the density of this neighborhood, it was a huge hit when that St. Mary’s lot was closed because it pushed 60 to 70 people out on the street,” said Smith. “You saw it, fights between people, people parking on corners, it was visible that it created measurable stress in the neighborhood,” Smith added.

“We sat down with representatives from the Manayunk Neighborhood Council, representatives from the North Light Community Center, the developer, and planning commission,” Cohen said. “We asked everyone what they could live with where the developer could still make a dollar and the neighbors could have some parking that won’t be too dense,” said Cohen.

A compromise was made that would allow 21 houses, 35 apartments, 16 parking spaces for North Light Community Center and some parking for the community to be made with the St. Mary’s property.

“It took several meetings, but we came to an agreement and in this case, I think we found a happy medium,” said Cohen.

Please email any questions or concerns about this story to: info@philadelphianeighbors.com.

Mantua: Bringing Down The House with Pastor Harry Moore

Walk near the corner of 37th and Wallace streets on a Sunday around noon and the red-and-white brick building will be screaming at the top of its lungs. It’s not the building itself, but the [continue reading…]

https://vimeo.com/65415914] Philadelphia’s Office of Property Assessment has implanted a new property tax reform effort, the Actual Value Initiative. Under this reform, many are paying more in property taxes as the values of most homes have [continue reading…]