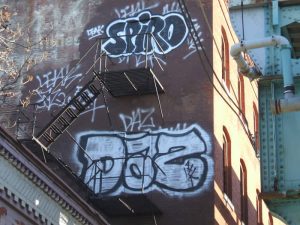 Running down Frankford Avenue to catch an arriving train, we can hear the reverberations grow louder, amplified through the steel supports that line the street. We hustle up the steps, taking two or three at a time, move through the turnstile with an urban-honed precision and dash toward the end of the platform in a footrace with a braking subway car. We slide deftly between the closing doors and fall into the front seats that face the large window framing the tracks ahead.

“You have to sit up front,” explains Ame, a semi-retired graffiti writer and my companion this afternoon, on the reason for our unexpected, near cardiac arrest-inducing workout. “It’s tradition. Besides, it’s the best view.”

While many El riders hurtle through the city oblivious to their surroundings, writers like Ame – whose real name is Domenic but requires some anonymity because he still engages in what is criminal behavior – see the rooftops as a gallery of sorts, an homage to the thousands of youths who have taken to graffiti as a means of self-expression and gaining an identity.

“Look at all this, the trash, the burned out buildings, the drug corners,” continues Ame, “you can see it all from up here. It’s a snapshot of a crumbling society.”

But as a weather-worn brick wall gives way to another that explodes with color, his eyes light up, he points, and his voice resonates with a passion and excitement.

“Look over there,” he says, pointing toward an approaching wall covered with letters, some as tall as the wall itself. “Some might call that a crime, but I see that as beauty. It’s creativity among chaos. It’s someone screaming to be heard, willing to climb buildings to just be known.”

But while Ame and his fellow cohorts share a philosophical take on their “art,” many city residents see it as little more than a destructive hobby. Just ask the residents of Fishtown. While they are hardly the only North Philadelphia neighborhood besieged by graffiti, their industrial areas provide countless walls and desolate locations for writers to exploit. Further compounding Fishtown’s situation is the Market-Frankford train line that runs the length of their western border. For decades, the El and its adjoining rooftops have been one of graffiti scene’s favorite targets. 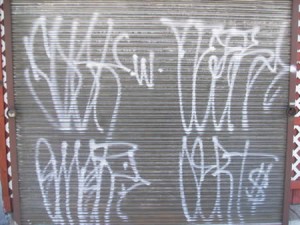 “Fishtown has always been pretty hot, especially if you’re from north [Philadelphia],” continues Ame, confirming Fishtown’s popularity among writers. “One of the main things in graffiti is building your ‘rep’ or reputation. Between the El, the traffic and even 95 on the other end, it’s a great neighborhood to get noticed.”

Still, what Ame and other writers typically fail to recognize is the economic and social impact that graffiti has on Fishtown, the city and its neighborhoods.

Economically, the effects are felt on two fronts: the natural flight of residents and visitors from neighborhoods that are seemingly crime-ridden and dangerous, and the quantifiable costs of graffiti removal.

“People feel unsafe when shopping in an area full of graffiti,” explains Thomas Conway, deputy managing director of the Philadelphia Anti-Graffiti Network, the city’s lone formal organization dedicated to the eradication of graffiti. “They would rather shop in a mall, which in turn, hurts our small local businesses along our commercial corridors.” Conway’s sentiments are especially true along the tenant-starved Girard Avenue where empty storefronts match those that remain occupied. 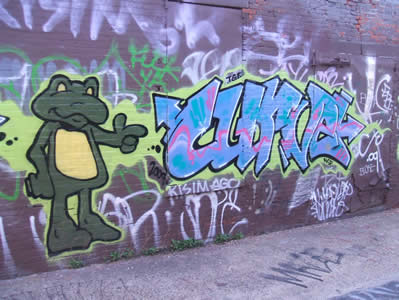 Along with forcing potential commerce out of Fishtown and other neighborhoods, the city is forced to budget money to fund anti-graffiti efforts. This year, according to Conway, the city has earmarked $1.2 million for the personnel, supplies and equipment needed to fight and remove graffiti. Their budget is dedicated to officers who work in liaison with the Philadelphia Police Department in tracking and apprehending vandals, crews who actually clean defaced walls and structures and providing free paint for communities who are willing to do the removal themselves.

So far, their efforts, in some eyes, have proved fruitful. “Years ago, every property along major corridors, including Girard Avenue, were covered with graffiti,” continues Conway. “We cleaned over 100,000 properties last year.  The Police Graffiti Squads, officers have made 30 arrests this year as compared to zero last year. Our paint and supply voucher program has seen an increase in participation the last two years from roughly 200 in 2006 to over 400 in 2008, which is a good sign.”

While the numbers may seem impressive and trending toward wrestling back control over Philadelphia’s streets, those on the front lines disagree. “They can ‘buff’ [remove graffiti] all they can and assign all the cops they want, it doesn’t much matter,” says Ame, deriding the city’s efforts to control graffiti. “This is a culture that draws momentum from opposition.”

If purely economic remedies provide a mere catalyst to a more concentrated efforts by those who engage in graffiti writing, social action could prove to be the most effective path. Established as part of the Anti-Graffiti Network in 1984, the Philadelphia Mural Arts Program was originally designed to engage adjudicated graffiti offenders and provide them with a positive outlet for their artistic endeavors: creating the stunning murals that decorate the city. While the program gained independence in 1996, it still works with offenders as well as under-privileged, at-risk youths, like those in Fishtown, who might engage in graffiti if another outlet was not available.

“It’s a fine line sometimes between what is graffiti and what is considered art,” admits Robyn Buseman, restorative justice program director at the Mural Arts Program. “But in the end, the motivations are similar so we feel that our efforts definitely make a difference.

In working with community groups in Fishtown, Buseman describes some of the program that’s been made via their work. “Our first priority is always working with the neighborhoods in determining what kind of mural they’d like,” he says.  “We try to involve those whose cases have been adjudicated and those enrolled in our program, along with our muralists in creating the work.”