Every big city has its neighborhoods to avoid after the sun sets, but in Philadelphia, our problems can be seen everywhere and they cannot be avoided. The difference between a city such as Washington, D.C., and North Philadelphia is that in Washington, the slums are only seen from a distance. But in Philadelphia our badlands are an eyeshot away.

Scattered throughout Philadelphia, yet more prevalent in some areas, abandoned buildings, warehouses and homes provide a constant reminder of what was once a location for commerce, production and living. According to the 2000 Census, Philadelphia had almost 72,000 vacant units–26,000 of which were considered abandoned properties.

What was once a neighborhood that housed the wealthiest families a hundred years ago is now a hot bed of economic decline and urban decay.

Strawberry Mansion has one of the highest vacancy rates in this city: out of those 26,000 abandoned units, 1,845 of them are located in Strawberry Mansion. Houses are in states of disrepair with paint peeling off and doors broken down. 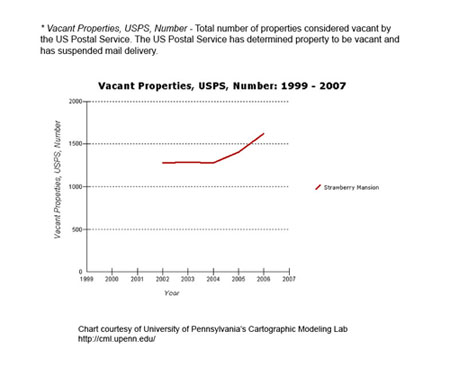 Abandoned houses and trash-strewn streets greet you block after block. Looking around the neighborhood gives one a sense of hopelessness. Audley Wagner, a resident of Strawberry Mansion for 40 years, agreed. “This place is depressing. There’s nothing to do here,” she said. “You’re just going to die here.”

It’s not that City Hall has no idea what’s going on. In fact, under the previous mayor’s platform there was the Redevelopment Authority, the Empowerment Zone, the Keystone Opportunity Zone, the Girard Coalition, the Vacant Land Stabilization Project, the Neighborhood Transformation Initiative and plenty more governmental and community coalitions. Unfortunately, nearly all of the programs have accomplished next to nothing since their launch.

The NTI, starting in 2001, with a $250 million budget was supposed to deal with the city’s declining neighborhoods, starting in Strawberry Mansion. 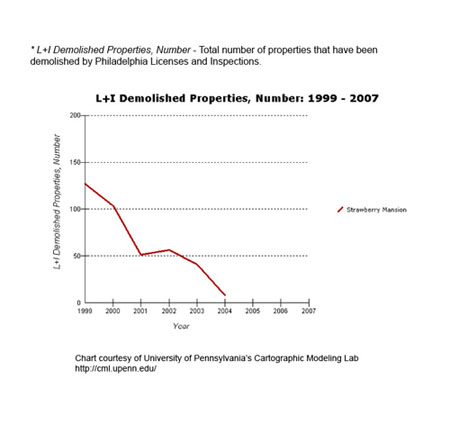 Through this program, the city was going to acquire abandoned properties and lots, demolish the houses and hope for developers to gain interest in the community. That’s a fair amount of money allocated toward this program, but why does Strawberry Mansion remain to look so bad?

One reason: the program closed down last September.

Next comes the Neighborhood Stabilization Program (NSP), which is managed by the Redevelopment Authority of Philadelphia. The NSP relatively has the same ambitions of its predecessor, the NTI, to turn vacant, foreclosed properties into user-friendly houses.

This program received $16.8 million from the U.S. Department of Housing and Urban Development (HUD) to support their effort.

“The city comes in here, cleans up and promise that they’re going to fix up the houses, but nothing happens. It’s just empty promise,” says Wagner. “They left us in a bind.”

So what is keeping City Hall from keeping the promises?

I think that City Hall wants to revitalize the houses, but the mayor and his staff have wait for a developer to express interest in a neighborhood. With up-and-coming Brewerytown right next door, why would anyone invest into rundown houses in a neighborhood such as Strawberry Mansion?

I spoke to a small-time developer, Stephanie Singer of Wise Acre Real Estate. In 2005, she brought her first house in Strawberry Mansion and started her real estate business.

She doesn’t sell the houses; she remodels them and rents them out to people.

“Strawberry Mansion has beautiful, old neighborhoods. They have ‘good bones’, the streets are nice width, there are porches, and there is a lot of space out in the back yard.” she says.

So far, she has bought and remodeled seven homes in Strawberry Mansion.

The transformation is slow. It takes at least two years to buy, remodel and find perspective tenants. If there were more money, the change can happen faster, Singer says.