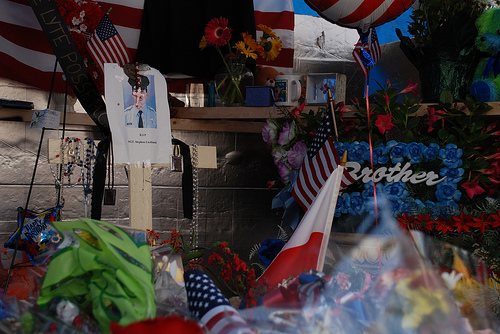 Sadly, it is a scene that hardly changes. Flowers line sidewalks, teddy bears are dropped off, and photographs are mounted on fences and sidewalks. People gather, light candles, and mourn the loss of a fallen officer.

Within the past year, four Philadelphia police officers were killed. On Jan, 30, Middletown Officer Chris Jones was added to the list. While Jones was not a member of the Philadelphia Police Department, his death brings back tragic memories to the officers who have experienced too much loss within this short period of time.

Officer James Robinson of the 24th District knows too well the feelings of losing a fellow officer. Two of the officers killed this year, Sgt. Steve Liczbinski and Sgt. Timothy Simpson, were from his district.

“Its hard to take,” Robinson reflects, “When you get that phone call, it’s rough. It hurts. Even if you don’t know that officer, you think about the potential of working with them. We are all in the same line of duty. We protect each other. You feel responsible.”

Jones is the first officer to die in the line of duty in the 57 years of the Middletown Police Department. The Bucks County officer was working overtime on Thursday morning, when he pulled over a car for speeding. While writing the offender a ticket, a three-car accident took place just behind his police car. The cars spun out of control, and Jones found himself trapped under his car. He died shortly after at St. Mary Medical Center.

Within the past year, the Philadelphia Police Department has experienced four tragic deaths. The first was Sgt. Steve Liczbinski, who was shot after pursuing bank robbers in May. In September, two officers were killed. One was Isabel Nazario, who was killed in a car crash after she chased down a getaway car. The second was Patrick McDonald, who was shot in a traffic stop gone wrong. Sgt. Timothy Simpson was killed in November in a car crash that involved a drunk driver being chased by another officer.

“I became an officer because I loved this city and I wanted to make it better,” Robinson says. “But it’s hard when the people you rely on get hurt. Jones’s incident is a bit different because he was victim of circumstance, whereas the Philadelphia officers killed this year were intentionally killed. But nonetheless, that’s somebody’s family. It’s another officer.”

Robinson is just 17 months into his career as a police officer with the city. It has been his job many nights to sit outside the homes of the families of fallen officers Liczbinski and Simpson. Officers take turns watching the homes of their fellow officers’ families for as long as the families want them to be there. “We are there just in case they need anything. We want them to know they are safe,” he responds compassionately.

Jones was buried in the same fashion as three of the other Philadelphia officers killed this year. A procession started from the Cathedral Basilica of Saints Peter and Paul and continued on to I-95 to Street Road. The procession followed down Hulmeville Road and finished at Resurrection Cemetery in Bensalem, Pa.

A local elementary school in Northeast Philadelphia, just minutes from Resurrection Cemetery, has felt the great losses the city has endured. The school has had to close its doors early, in order to ensure that its children will be already home and safe before the funeral procession even bega.

“Most of the kids are bussed in to the school from Bensalem,” says fifth-grade teacher Ashley Bontempo, “and we have to make sure the busses are all off the road so they won’t get in the way or make the children late.”

While some of the children are excited over the prospects of a half day, others are affected by the reason why. “Some of the students line Hulmeville Road in their uniforms, holding little American flags or ‘God Bless’ signs,” Bontempo says. “They see the deaths. Some of their parents are police officers, and they get scared. It’s like a bad case of déjà vu…the students don’t know how to react.”

The students had a half day on Thursday, as Jones’s funeral procession took over the streets in Bensalem. When asked if he would be attending, Robinson replied, “Of course. He’s a cop. It doesn’t matter if he wasn’t one of ours or that we didn’t know him. He did what we do.”