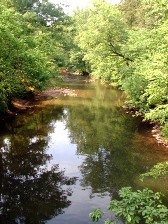 The Wissahickon Valley Park is one of Philadelphia’s largest municipal parks. Known to locals simply as “the Wissahickon,” this park is among 63 regional and neighborhood parks that make up Philadelphia’s countywide park system known as Fairmount Park.

Located northwest of Center City in the Chestnut Hill and Manayunk neighborhoods, this gem of a park is one of the largest urban parks in the world.  Consisting of 50 miles of rugged trails and the scenic Forbidden Drive (a wide, gravel pedestrian road paralleling the Wissahickon creek), this park makes for an ideal place to walk, jog, hike, and bike in the city.

I caught up with Christine Hurtubise of Mount Airy in front of the crowded Inn. The 24-year-old comes to the Park at least once a month. 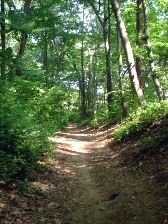 “The trails here are amazing,” she states while gazing up at the vast network of deciduous tree branches that cover the sky. “It’s really a perfect spot to escape to. People bring their dogs and kids…it’s just a good atmosphere unique to Philly.”

The beauty of the Wissahickon comes in part from the incredible support of local residents. Like all of the municipal parks in Philadelphia, the Fairmount Park Commission (FPC), established in 1924, oversees the Wissahickon Valley Park.  However, as is the case with many neighborhood parks, an added touch is necessary for maintaining a parks positive environment. That added touch is the care from the community. In particular, the sense of community the Wissahickon exudes is perhaps what really makes this park so welcoming.

The park is unique because of its successful membership. The multiple activities offered by the park, ranging from bird watching to horse-back riding, are all organized through member donations from the Friends of the Wissahickon, a non-profit organization that focuses on ensuring the maintenance, preservation, and conservancy of the historical park.  The organization with 1,600 members across the Delaware Valley and beyond is the largest of more than 80 “Friends of Parks” groups in the city.

Among the many dog walkers on Forbidden Drive is Lisa Myers a Roxborough native who prior to relocating was a Friends of the Wissahickon member. 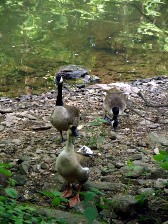 “Philadelphia has great parks, but a lot – too many of them are severely neglected, sometimes because the city has forgotten about them, which leads to lowered usage,” Lisa states, while tightening her grip on her yellow Labrador. “I think parks are hugely important to urban areas. Sometimes the city can’t fully fund them all and they don’t always know the parks unique needs, so the parks rely on neighbors and the local residents to keep it going. It’s rewarding when you can get involved and unite with neighbors to keep your parks, gardens or centers in good condition. You can say, ‘Hey, I built that bench or I cleaned that creek.’ It’s fun”

Even the smallest parks in Philadelphia’s Fairmount Park system benefit greatly from the attention of local residents.  Becoming a member of similar park organizations throughout Philadelphia like the Friends of the Wissahickon organization ensures that through membership donations and volunteer support, neighborhood parks, large or small, are kept clean and safe, even when city funds are low.

It’s apparent – you can immediately sense that the Wissahickon Valley Park is loved and taken care of. It is the perfect example of what every city park is about: community, recreation and nature. It is here that you may run into a neighbor, former schoolmate, or catch up with a loved one on its many trails, beside the creek, for an outdoor picnic or at lunch in the Inn. 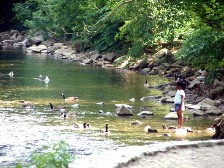 At the very least, the Wissahickon Valley Park enables visitors to explore Philadelphia’s woods, history, and feed the friendly resident ducks and geese, a personal past-time of mine going back to the early 1990s when my father would walk me down to the park’s creek with bread.

The Wissahickon Valley Park is great for creating memories. A visit here and one is guaranteed an opportunity to get away from the hustle and bustle of downtown Philadelphia for a bit of fresh air, relaxation and tranquility and perhaps meet up with an old friend.