The detours on Germantown Avenue are unavoidable. All main street corners are decorated with stacked signs warning about construction, cars are forced off of the main road, and sidewalks lined with barriers.

“My father walks with a cane and I have a 4-month-old baby,” lamented Lashonda Copeland as she maneuvered a stroller around Germantown Avenue. and Ashmead Street. “The entrance to my dad’s building is right on the main road, but now he’s got to walk around to the back of the building because it’s hard to maneuver the construction. This project is a nightmare!”

When the Pennsylvania Department of Transportation announced on Feb. 10 it was planning to invest $9.2 million to rebuild five blocks, or roughly  2,000 feet, of Germantown Avenue, the department proposed a start date of Feb. 17 and an end date of January 2010. In those reports, the construction plan, beginning between Ashmead Street and Church Lane, described intentions to install new granite curbing and granite block shoulders,  to build a new concrete roadway with updated trolley tracks, to refurbish sidewalks, to install new decorative street lights and trees, and to replace old underground water and sewer pipes.

On March 24, Penn DOT released a second press release stating that Germantown Avenue  would be closed and detoured between Ashmead Street and Queen Lane for 11 weeks beginning Monday, March 30. After those 11 weeks were up and that section of the avenue reopened in mid-June, the blocks between Coulter Street and Church Lane would have their turn being closed for construction. The timetable was decided to avoid impacting access to the Germantown High School and Germantown Friends School while they were still in session.

Where does the project currently stand?

Walking along the stretch from Ashmead to Church, the streets are still gutted and lined with construction trucks. Workers are still pulling chunks out of gravel out of the ground, laying new pipes and getting in the way of pedestrians trying to go about their daily activities.

Local businesses are feeling the pain from all of the construction. Barron Roane, owner of the Recyclables Shop at 5245 Germantown Ave. claimed that his store was feeling about a 25 to 40 per cent decrease in visitors since the construction began. “It’s about grabbing the pedestrian interest more than ever now,” Roane explained. “I’ve been putting more merchandise outside than in years past, so people feel more need to stop and look. I started selling dollar bags of popcorn as a little gimmick, and putting out dollar racks of used clothing as well. I’d never even sold clothes before this!”

Other stores reported similar anger about decreased business. Clerks at Gaffney’s Fabrics on 5401 Germantown Ave. opted not to give specific numbers, but they agreed that the business was much slower than at this time last year.

The construction makes things especially difficult for delivery workers supplying goods to local businesses. Jose Figueroa, a deliveryman for Herr’s Chips, said he  has to spend “extra hours just maneuvering the truck around back streets. You can’t just pull up in front of the main stores on the road anymore and drop off food or anything. Now we have to figure out which streets you can turn around on to come up on businesses from the side, and walk down the street to unload dozens of boxes at times. It’s a pain.”

When questioning pedestrians about what they thought the proposed end date of construction would be, answers varied from two weeks to several months to just hopefully as soon as possible. Construction workers from Seravalli Inc. of Philadelphia found alongside the road described their current priorities to be installing the new trolley tracks for SEPTA. Ironically, there are no current plans to start running the long-defunct 23 Trolley along Germantown Avenue again, but SEPTA and government officials still want the tracks to be in the ground, just in case they decide to revive that mode of local transportation. 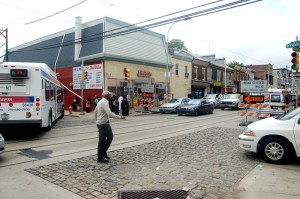 This improvement project is only part two of Penn Dot’s two-phase program to rebuild and restore two deteriorated sections of Germantown Avenue in Philadelphia.  Last year, Penn DOT rebuilt Germantown Avenue between Allens Lane and Mermaid Lane in Mount Airy under a $17 million project, and so far reception to that project has been positive. While the new look and feel of the streets in that area are appreciated, it doesn’t make dealing with the pains of current construction any easier for Germantown locals.

Copeland had nothing good to say about the work being done in her town. “I see the point, but it still drives me crazy. It’s loud, annoying and an inconvenience. It makes it harder for people like my dad to get around, and the fact that it’s taking even longer because of those dumb trolley tracks they aren’t even going to use is the most annoying. This is a main street; they should just speed the whole thing up already.”