Flag Day celebrations seem few and far between these days, and at the Sparks Shot Tower Rec. Center, neighbors are taking advantage of this excuse to celebrate. The Sparks Shot Tower on Front and Carpenter Streets in South Philadelphia looks like an abandoned relic in a sea of playground equipment and grass. But for neighbors with kids and their fans, the Shot Tower Playground is a community meeting place where arts and crafts, little league, summer camp and many other family oriented resources and events happen.

Mary Grace Gorman is the Recreation Leader at Shot Tower Playground, and she put Saturday’s Flag Day Bike, Trike and Stroller Parade and Decoration Competition together. She said the idea came to her last year as she was picking up all the flags from the shot tower’s Bicentennial Celebration. The parade route was the perimeter of one square block, all the way around the Shot Tower. Along with Michael Townsend, the playground’s Assistant Rec. Leader for the past 37 years, Gorman organizes plenty of activities to keep the community busy.

On Saturday, Kathy Snyder brought her son Matthew, 1, and Eva, 9, to the parade recognizing the day established to commenorate the adoption of the flag of the United States. Snyder grew up around the corner from Shot Tower Playground and still lives in the neighborhood. She appreciates the growth she’s seen here over the years: “Grace really keeps this place going. I came here as a child and now for my kids to come it’s really nice. They expanded all of this, it’s really different,” she said.

The playground at the shot tower was built in the 1970s, said Joseph Figurski. Figurski is the third generation of his family to live at 132 Carpenter Street. He is the Vice President on the Advisory Council for the playground. This past Saturday Figurski was also the musical accompnament for the parade—playing patriotic songs on his accordion. On the Advisory Council for ten years, Figurski has played a key role in the expansion of Shot Tower Playground and keeping it’s programs running. Of Mary Grace he says: “She’s doing a wonderful job. They  have a kiln in there where they make glazed pottery, and they do arts and crafts—all kinds of things.” Figurski is a retired Mummer, having played in the Heggman String Band, which is about to release an album that Figurski says he’ll proudly sell for them.

The playground’s little league team, the Phillies Rookie League, is popular too. The League is coached by Townsend, a Mummer in the Froggy Car Brigade: “The Phillies are really good to us,” he said. The Phillies give the rookie team jerseys and equipment, most anything they want says Townsend. On Saturday he was the judge for best decorated parade vehicle. “When Grace came, she does a lot of neat stuff,” Townsend said of the Rec. Leader. “Before her there really wasn’t that much.”

Tory Gargano was was also there with his wife and three daughters, Victoria, Alexa and Olivia. The girl’s bikes were decked out in red, white and blue. Gargano grew up  at 131 Carpenter. The girls enjoy Wednesday night arts and crafts almost every week at Shot Tower Rec. Center.
Philadelphia’s Shot Tower was built in 1808 by Plumbers Thomas Sparks, James Clement and John Bishop. Considered by many as the first shot tower built in the nation, it originally made shot for hunting rifles. At its base the tower is 30 feet in circumference, tapering to a 15-foot circumference at the top, some 142 feet up. Built of state-of-the-art brick work and originally 150 feet tall, the tower  symbolized the success of industrialization in Philadelphia and is now the oldest industrial revolution-era structure in South Philly. 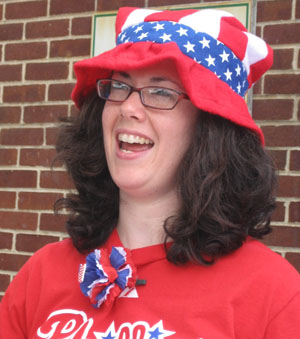 Before it’s time, shot was made by pouring molten lead into wooden molds. But the shot tower utilized gravity as well as temperature for its shot-making. With this new technology, Molten lead was poured into the top of the tower. Gravity would then pull the lead down, causing the lead to form into round balls. The lead then passed through a copper plate with holes punched in it, which separated the lead into shot-sized pieces. The shot would immediately then land in cold water and harden.  When the shot tower began to make ammunition for the U.S. War effort during the War of 1812, Bishop, a Quaker and pacifist, sold his share to Sparks.The shot tower remained in operation by the Sparks family until 1903, when the United Lead Company of Pennsylvania bought it. That company kept it in operation until 1913, when the City of Philadlephia bought it. It is now part of the city’s Recreation Department. The Shot Tower Rec. Center occupies the base of the tower as well as some of he original support buildings where shot was polished and sorted then stored in barrels.

Today the Sparks Shot Tower is sealed up and no one goes inside the structure. This landmark stands over a happy little playground supported by a strong Queens Village community that continues to create recreation and friendships around an icon of Philadelphia history.