Row homes line this North Philadelphia street–some of them abandoned and wet from the grip of constant rain. There is a single rumble of thunder. A low-lying fog covers the front of a three-story brick house on 1511 N. 33rd St. near Oxford in North Philadelphia’s Strawberry Mansion section. Plywood and planks help hold this home together. The crumbling window frames accent the collapsed ADT Security sign hanging in the central window. Abandoned and cramped, this boarded up house has seen better days.

Outside, a plaque installed by the National Park Service in 1999 reads: “In this place John W. Coltrane, a pioneering African American jazz musician, composer, and saxophonist… lived…”

Although the legendary John Coltrane died of liver cancer in 1967 at the tragically young age of 40, his influence and popularity are still as strong as they were while he was alive. Sadly, the house where Coltrane once lived is dying a slow death, desperately in need of restoration that seems beyond the means of the many who care about its preservation.

John Coltrane, his mother, aunt and cousin arrived in Philadelphia from High Point, N.C.,  in 1943. Coltrane had studied the saxophone and clarinet while in high school in North Carolina. In Philadelphia, he worked Campbell Soup plant and a sugar refinery. Drafted in 1945, he played in the U.S. Navy Band.

Coltrane toured with famed trumpeter Dizzy Gillespie in 1950 and returned to Philadelphia in 1951. Back in Philly, he started hanging out in black clubs and attended Ornstein School of Music, formerly part of Combs College of Music in  Mt. Airy. 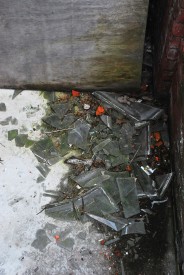 Coltrane continued his classical studies on a scholarship during the day at the Granoff School of Music near 21st and Spruce. At night, he played rhythm and blues and jazz in such clubs as Zanzibar, the Downbeat and the Blue Note.

From the time he became a member of the band headed by the acclaimed Miles Davis, Coltrane began gaining wide recognition for blowing his long, strong and shattering solos. He played with jazz stars such as pianist Thelonious Monk and his personal idol, sax extraordinaire Charlie Parker.  He formed the famous  John Coltrane Quartet at the 33rd Street home. That group included pianist McCoy Tyner, drummer Elvin Jones and bassist Jimmy Garrison. From his Government Issue loan and his mother’s savings, he had purchased the 1511 N. 33rd St. property for $5,416. Coltrane wrote “Blue Trane” and many other tunes at his home , which carries the National Historic Landmark distinction and now sits in despair.

“I still remember John Coltrane’s cousin, Mary Alexander, calling my office 23 years ago,” said Randall Baron, the historic preservation planner at the Philadelphia Historical Commission in City Hall. “She called and wanted to get the house recognized. We thought—well, he’s a very important figure, it wouldn’t take long to get the house designated and recognized in Philadelphia.”

Mary Lyerly Alexander, who inspired Coltrane’s tune, “Cousin Mary,” inherited ownership of Coltrane’s home when he passed away. “John bought this house for his mother, aunt and cousins.  He stayed here most of the time from 1952 to 1958,” Alexander said in a 2003 Philadelphia Inquirer article. “I want to renovate the house so that I can finish my years here.”

Local fans of ‘Trane” formed the John Coltrane Cultural Society to help preserve his legacy and the house. “About 25 years ago, we were part of the organization. I was one of the founders of the [society] with Mary Alexander and Sophie Stewart,” said Marilyn Jewett, co-founder of the John W. Coltrane Cultural Society. The organization dedicated years to preserving the John Coltrane house with the help of Alexander by raising funds for the house, maintaining archives, sponsoring concerts by established musicians in the backyard and holding workshops for children to learn about jazz.

“I painted the front [of the Coltrane House] years ago and I knew his cousin Mary, and in 2005 she wrangled 5K out of Adidas to donate to the Cultural Society,” Steve Powers, a friend of Mary Alexander, said in an e-mail. “Mary had dreamed of teaching kids jazz.”

On Oct. 27, 2004, Alexander sold the historic Coltrane house to Norman Gadson, a resident of Philadelphia. Gadson purchased the home for $100,000.  Alexander became ill and could no longer care for the house or continue her involvement with the John W. Coltrane Cultural Society.

After Gadson purchased the property, he began making repairs to the property to help preserve the home of John Coltrane. “He found the house in a certain level of disrepair,” said Melissa Jest, the neighborhood coordinator for the Preservation Alliance for Greater Philadelphia and Field Representative for the National Trust for Historic Preservation.  “He had a certain level of carpentry and by his own volition he made repairs to the property to stabilize for future renovation.”

Three years ago, the neighboring twin to Coltrane’s house caught fire. There was some damage to the Coltrane property because of the heavy smoke. “People used to just stay there with his cousin Mary.  Then there was fire that originated from the [other] house,” said Henry Stone, a worker at the Strawberry Mansion Green Driving Range, located across 33rd Street from Coltrane’s home. “All the musicians played there. I remember there were about 150 musicians there, way back in the day, it was really nice. It would be a historic movement to fix the house up now and a tribute to Mary Alexander,” said Stone.

Gadson struggled with repairs and maintenance on the house. He valued Coltrane and wanted to preserve his idol’s home. “It was a surprise to the family when Norman Gadson passed away suddenly,” said Jest. “He loved John Coltrane. He was a devotee and he understood what Coltrane meant to the world and his musical gift and not just for jazz but for all music.”

Since the death of Gadson, the house belongs to Gadson’s daughter. The neighborhood coordinator, Melissa Jest,  along with the Preservation Alliance, is helping the Gadson family identify resources and bring any technical assistance, information, evaluation of the property and advice.

“Gadson’s daughter is not at an age where she can make legal decisions necessary to do this type of planning,” said Jest. The Gadson family would like to see the house become a cultural center again, just as  Alexander had intended. The Gadsons are going through legal custody to get ownership of the house. “They want to be able to open up his home to as many people as possible. But again being novices at it, they are starting from the ground up and it may take awhile,” said Jest.

Many residents of Strawberry Mansion want to see the Coltrane House fixed and functional. Gail Clark, a general contractor in Strawberry Mansion and long-time resident of the area, believes the City of Philadelphia should help fund the repairs on the house. “A couple times that I was driving by, I can see people standing outside the home. I have never been inside, but there are always people there. The city should repair and fund it—it will help keep it historic,” Clark said.

Clark’s husband and contracting partner, Jerry Clark, wonders if anything will become of the property. “I don’t know anything about what’s going on with the Coltrane home. I have heard of him—his singing and all. No one has worked on that home. People come there but I don’t know what they are there for, there is always people just standing outside,” Jerry Clark said.

“I think Coltrane is the most important musician of all time.  It’s incredible how important he was to the city and how important this city was to him,” said Eric Miller, editor and publisher of MAGNET Magazine. “It’s hard to believe that his house is falling apart. It’s ridiculous. It wouldn’t take that much money to fix it up; it would be great for the neighborhood and for this city,” asserted Miller.

A mirror-speckled mosaic honoring Coltrane scrolls across a nearby row home on 1515 N. 33rd St. in Strawberry Mansion. “It would be a source of pride for the folks in the neighborhood to have such a strong musical legacy in the house.  There will be a lot of visitors discovering Strawberry Mansion because of a resource like this and I see it opening a lot of doors for the neighborhood,” said Jest.

Looking toward the future, the Gadson family wants to maintain the Coltrane legacy but does not have the financial means to do so. Bringing the remaining founders of the John W. Coltrane Cultural Society and the Gadson family together may help get state and city funding. Currently, these groups have non-profit entity, making it tax exempt.

“The reality is that the Gadson family must produce some kind of income stream for the house because taxes have to be paid and maintenance has to be done. If it turns into a cultural center, there may even need to be staff,” said Jest.

By fall 2010, the Preservation Alliance intends to have a phased work plan. Doing so can better secure and prepare for the damages to the house based on inclement weather patterns plus finding organizations and funding to help support the home. “We need to do something to protect the contributions that Coltrane has made to the world as a musician. If his house falls down or people forget where he came from it will be a shame and it shows the lack of respect we have for him,” Harold H. Palmer, resident of Philadelphia, wrote in a letter to President Obama.

“This city has a history of rebuilding itself,” said editor Eric Miller. “I think there is a greatness and importance to John Coltrane and the legacy of blues and jazz forums. Jazz pretty much evolved when he died and people are doing what he accomplished in so little time.”

Hopefully, with help from the City of Philadelphia and other organizations, John Coltrane will live forever in Strawberry Mansion through the house he once owned. “His house should be preserved by the National Park Service. John Coltrane deserves care by our city,” said Palmer.