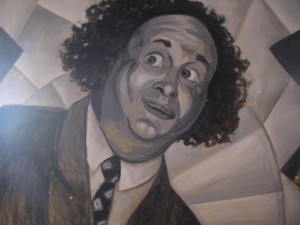 Who says acting like a stooge won’t get you places? It sure worked for Louis Feinberg.

On Oct. 15, the Associated Alumni of Central High School held its 15th annual induction ceremony. The ceremony was held at the Sheraton Society Hill. Those who attended were greeted by the sounds of string instruments and tables full of appetizers. Dressed in formal wear, inductees, alumni and students alike immersed themselves in small talk while waiting for the event to begin.

As they waited, a small crowd gathered around two poster boards with pictures of the honorees. One seemed to stick out from all the rest. The photo of a frizzy haired man pursing his lips stared back comically at the crowd. It was hard not to crack a smile. Of course Feinberg always had that affect on people.

Louis Feinberg, a.k.a. Larry Fine, one of the original members of the Three Stooges, was one of 15 former Central High School students inducted into the school’s Hall of Fame. This was the first year that the Central Alumni Hall of Fame Committee chose to induct potential inductees posthumously. Of the 15, nine fell into this category.

“We had been doing hall of fame’s for about 35 years and it’s always been to promote the school. Part of our focus is to have graduates, especially those that have succeeded, come back and meet the students and attend the actual ceremony,” says Chuck Steinberg, a member of the committee. “We never really wanted to have deceased graduates before, but there has been a growing movement within the alumni association to expose the history of the school and the alumni by inducting former graduates who obviously cannot attend.”

Fine’s impressive resumé definitely brings some color to that history. Although Fine may seem out of place among artists, scholars and men of industry — he and Wynn were the only entertainers inducted — his accomplishments are not to be taken lightly. If anything, he’s definitely the most recognizable.

“He certainly meets the requirement and he had national and/or international recognition in his field,” states Steinberg. “The Three Stooges is a group that almost everyone knows and is familiar with. Many people are not even aware that Mr. Fine was a Philadelphian and that is a part of what we’re trying to do.”

In a career that started in 1930 and lasted until 1970, Fine started in 190 short films with the Stooges, as well as several features. He and his cohorts’ antics are still broadcast around the world to this day. He is beloved by millions to this day. Impressive for a guy who never graduated high school.

Yet, because Fine never graduated, there is very little evidence that he went to Central at all. The fact that he no longer has any direct descendants who are alive to provide more detailed information doesn’t make search any easier.

Gary Lassin, curator of the Stoogeum in Ambler and president of the Three Stooges Fan Club, helped the committee solve some of the mystery of Fine’s scholastic career, but even he wasn’t able to fill in all the blanks.

“He [Lassin] wasn’t sure how long Fine attended Central,” says Steinberg. “We do know that he did go and matriculate. We have found some records at the school. We think somewhere around two to three years before he left.”

Luckily, he was still considered an alumnus due to attendance there.

“Mr. Fine was eligible in that he did attend the school. We’re not sure specifically how long,” Steinberg states. “It is our belief, and part of our bylaws, that anybody is a member of the alumni association if they attended Central High School. You don’t have to have graduated.”

Regardless of Larry Fine’s attendance or his career path, one cannot deny that sharing a tradition with someone who has found success in their field can instill a sense of pride within a student body.

Fine never painted a masterpiece, nor was he a Rhodes Scholar or a philanthropist. He was never considered the fastest man in the world nor was he the president of a company. Yet, he holds a special place in the hearts and memories of millions of people through his gift of comedy. Although it has been 34 years after his death, he still may ignite fires inspiration in future students at Central.

Maybe it’s not so bad being a stooge after all.