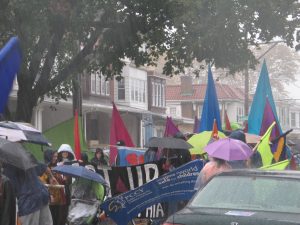 The forecast called for one very wet and mucky Saturday afternoon.

But after having already been postponed a week, Spiral Q Puppet Theater’s “10th Annual Peoplehood Parade and Pageant” in West Philadelphia went on as planned.

As part of their Parade and Pageant Program, each year Spiral Q artists hold workshops in the city’s most underprivileged neighborhoods, working with hundreds of children, teens, parents and even the elderly to create different parade art.

Unfortunately, there weren’t any puppets featured in this year’s parade since they would have been destroyed by the rain.

Even so, neither the lousy weather nor the lack of puppets seemed to hurt the day’s festivities.

Everyone participating in the parade gathered outside of the Paul Robeson House at 50th and Walnut Street. In the sea of umbrellas and brightly colored flags, a small drum circle had formed.

Adults and children alike beat away on a variety of makeshift drums–mostly painted buckets and water jugs–while a group of teenagers showed off their best dance moves in the center.

Adding to the musical mix, a boy blew a small horn and a woman strummed a washboard.

A few people came in costume, including one very miserable little bumblebee.

The only participants who were able to keep dry were the girls peddling inside a surrey, which had been designed to look like a giant frog’s mouth.

I was trying to juggle a camera, a notebook and an umbrella when I was approached by a seemingly flustered woman in a soaked poncho.

Unsure of what exactly that entailed and whether I could commit, I politely declined.

Meanwhile, Spiral Q staff members shouted from the porch of the house: 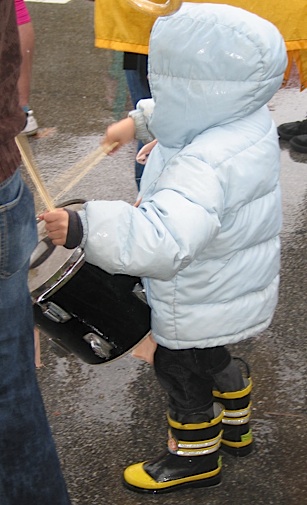 “We have more drums! We need more drummers!”

I then met Dan Hajdo, a volunteer for Casino-Free Philadelphia, who was there to hold a banner. However, he needed another hand.

“We didn’t have other people to come out and help me carry it,” he said. “I think everyone else here has something to do.”

Once everyone had been assigned some sort of activity or prop, the staff did a roll call.

While it was clear the turnout wasn’t as impressive as it had been in previous years, there were still several groups in attendance including, Cedar Park Community Association, the West Powelton Steppers, the North Philly Stompers and two elderly women from the United Block Captains Association.

A director at the Paul Robeson House delivered a short inspirational speech about Robeson, the renowned performer, professional athlete and civil rights activist.  Another woman then took the microphone and really tried to boost everyone’s energy.

“We will proudly walk the streets of West Philadelphia to celebrate one another and all that we believe in,” she shouted. 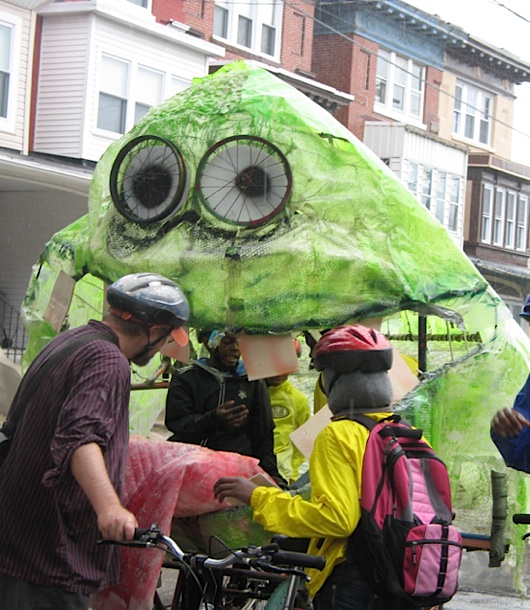 As the crowd marched into the intersection, she led them in a chant: “Rain or shine we don’t mind, peoplehood today!”

Ironically, that was when the rain started to pour even harder.

People were already waiting outside of their houses with their children to watch and to take photos.

Two police cars led the parade, but none of the streets was blocked off. Instead, volunteers with neon, yellow flags stood in the way of traffic. Trailing at the end of the line were three school buses, which were there just in case the weather got worse.

The final stop on the parade route was Clark Park at 45th and Chester Avenue, where a giant puppet performance featuring over 200 performers was then set to begin.

However, this fun West Philadelphia tradition is about much more than just showcasing creative and colorful puppetry. It’s about what the puppets represent.

When Philly native Matthew Hart founded Spiral Q in 1995, his mission was to promote social and political change.

Using the storytelling techniques of puppetry, street theater and pageantry, community members are encouraged to express their concerns about their neighborhood as well as their hopes for its future.

Since relocating the theater to the West Mantua section of the city in the winter of 2000, Spiral Q has doubled its staff and opened the Living Loft Puppet Museum.

By appointment only, people can come see hundreds of six-foot puppets and other dazzling parade items in addition to learning about the theater’s history and partaking in different art activities.

“Groups like Spiral Q and all the groups and people who’ve come out for this parade, they’re the backbone of a healthy community,” Hajdo said.

It didn’t seem as though everyone necessarily knew each other at the parade, but there was such an automatic sense of unity.

Even Hajdo, who lives a West Philadelphia and has attended Peoplehood before, couldn’t help but be moved by the scene outside of the Robeson House.

“It’s inspiring to be a part of this–to see the dedication and spirit of the people in my neighborhood,” he said. “And even with the rain, it’s a lot of fun.”