Linn Vaughters is in the last place she thought she’d be when she started her career: North Philadelphia.

As a private school teacher, she held a negative view toward Philadelphia’s school systems that stemmed from her parents, both teachers in the School District of Philadelphia for decades.  So when a friend she ran into by chance at a Starbucks suggested a job teaching Spanish at Community Partnership School, she decided to take a chance. 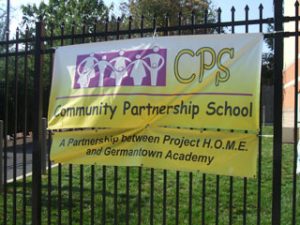 “I was informed by the awful conversations my parents had at dinner about what went on in their classrooms, and the things you would hear on the 11 o’clock news,” Vaughters said. “So I’ll be honest: initially, I was like, ‘Oh man. I don’t know how serious it’s going to be. I don’t know if I can do enough to help a situation that’s that dire.’”

What Vaughters quickly learned is that Community Partnership School’s kids are, like most elementary school students, ready and willing to learn. And their parents are just as willing.

Community Partnership School is an independent private school founded in 2006 and is located in the Honickman Learning Center and Comcast Technology Labs at the Project for Housing, Opportunities for Employment, Medical Care and Education on Judson Street. Starting out with only 36 kids in pre-kindergarten through first grade, the school now enrolls 75 students up to fourth grade, with plans to expand to fifth grade next year.

Each classroom holds a maximum of 12 students and there is a six-to-one faculty-student ratio, ensuring that each student’s needs are addressed. Students spend an average of 10 hours a day in school Monday through Friday, which includes after-school academic programs. Most students live an average of five blocks from the  building, giving the school a local feeling.

“Most of our families, about 50 percent, live in the immediate neighborhood,” said Eric Jones, the head of school at CPS. “But we have families that live as far away as Southwest Philly down by the airport, as far north as all the way out Broad close to Cheltenham, but we have a real commitment to the neighborhood first.”

Although it is expensive for parents to enroll their kids in school, about $15,000 a year per child to operate the school, what makes Community Partnership School a reasonable alternative to public schools is the flexibility with tuition as well as its ability to address parents’ concerns because of the school’s small size. That makes the immediate neighborhood residents, such as those in North Central and Strawberry Mansion, see the school as affordable.

“You can’t just sort of show up a couple days before classes start and say, ‘I want my child to come.’ We start the process in the late fall before the new school year,” Jones said.

That process starts in November and continues until the child’s first day in school. Forty-five to 60-minute information sessions and meetings with parents and teachers as well as readiness tests help school administrators to gauge which students are suitable for enrollment.

“I think what might be the most important piece is the parent interview we do or the one-on-one we do with the child’s primary caregiver,” Jones said. “We believe firmly that a child’s first teacher is his or her parent or guardian, and so that’s one of my favorite parts, doing those [the interviews]. ”

Vaughters, who is both a Spanish teacher and the director of enrollment for the school, said that investment also comes in the form of parents attending school meetings, having personal conversations with teachers and keeping an open-door policy where parents are encouraged to meet and approach the administrators about questions they have about their children.

“We depend, because we’re a small school, on parent participation,” Vaughters said.

In a city where many people do not have a high school diploma, the prospects of applying for financial aid and looking for appropriate schools may not be something parents are used to.

“I had to remember that the parents whose kids are here maybe didn’t finish high school themselves,” Vaughters said.

But Vaughters is dedicated to working with parents in an environment they may not be familiar with in order to help them choose appropriate schools for their kids. That includes applying to multiple schools, navigating the financial aid process and projecting ahead based on their children’s skill levels.

“They’re going to do the same process they did with CPS over again for their next school,” Vaughters said. “I have to sort of teach them [the parents] to measure their time as well as their expectations.

For the most part, Vaughters said, families do just that. And when there are issues at home, family problems often become school problems as parents go to teachers to explain why those issues might affect their child in school.

“In terms of kids being overwhelmed with other stuff aside from what happens in school, I think we’re blessed because we create decent and strong relationships with families,” Vaughters said. “Families feel comfortable coming in and saying, ‘Look, this is what’s going on at home, and it may affect my child, so keep an eye on it,’ and we’ll work together to make it work.”

But for Vaughters, it’s worth the extra time out of her day to speak with families because in the end, she thinks the school  is really making a difference in the community.

“This is exactly what it should be, exactly where it’s needed,” Vaughters said.