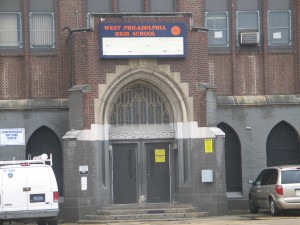 Located just a few steps from the current building, the new facility will replace what was once West Catholic High School for Boys at 49th and Chestnut streets.

“I think it will bring a lot of pride, not just to Walnut Hill but to the students who go there,” says Aleea Slappy, the education programs manager at the Enterprise Center’s Community Development Corp.

Indeed, many are hoping the transition to the new building will be the positive change needed to really improve West Philadelphia High School, which has been stuck in a downward spiral for over a decade now. Despite the 52 percent decrease in violent incidents last year, the school has been on the state’s “persistently dangerous” list since 2000–the furthest that records go back. 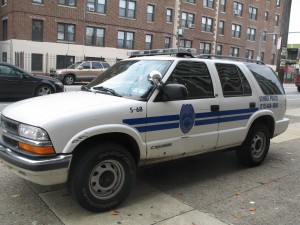 In 2007, there were 23 fires set inside the building as well as a series of assaults on teachers and staff which led to the replacement of the school’s principal. In fact, the school has gone through seven different principals since 1998.

Academically, West Philadelphia High School is one of the poorest-performing schools in the both the city and state, having failed to meet the adequate yearly progress targets under the No Child Left Behind Act since it was enacted in 2002.

The new school is expected to cost $66 million and is one of the last projects included in former District Superintendent Paul Vallas’ $1.5 billion capital building project.

It’s also one of the most overdue.

Constructed in 1912, the current building is one oldest in the school district and yet, has never had any major renovations. Lincoln High School in Mayfair was built almost 50 years after West Philadelphia High School but just unveiled its new building in September.

In addition to being an eyesore, it’s simply no longer an accommodating learning environment. The building has no science labs and was originally designed to house over 3,000 students.

Today, due to a steady decline in enrollment, the school has less than 1,000 students.

Luckily however, it does appear that the school district might finally be making stride in its attempt to turn West Philadelphia High School around.

Much of this is thanks to superintendent, Dr. Arlene Ackerman and the school’s principal, Saliyah Cruz. Aside from hiring more teachers and increasing security, they’ve taken a different, more conducive, approach to reform.

“Everyone is now being held accountable,” says Slappy, who was a part of the group of stakeholders and community members that came together last year to address education in West Philadelphia for the Sustainable Communities Initiative. “You can no longer just say it’s the teachers who don’t care or the principal who is overworked.”

Increasing parent involvement and accountability is one of the key components of the district’s five-year, Imagine 2014 plan. The first phase of the plan was launched last year and aggressively targeted the district’s 85 empowerment schools.

Every month Ackerman has been holding round-table meetings with parents from around the city.

“She takes her time and she listens to what we have to say,” says West Philadelphia High School alumna and parent volunteer Carla Jackson.

Jackson was hired in September to reach out to other parents and help coordinate community meetings and events. Right now, she’s working on the school’s absentee list. Each week she tries to get four or five parents together to come in and make phone calls to families, keeping them informed about their child’s attendance and answer any questions they may have.

This is on top of the automated message system which calls every student around 6:30 a.m. to make sure they wake up for school. And although West Philadelphia High School still has only a 77 percent attendance rate, there has been a slight increase.

Jackson agrees.That’s why the mother of five says she attended meetings and fundraisers at all of her children’s schools whenever she could.

And already, she’s noticed her presence in the school having an impact on her son Kenny, a sophomore who has been struggling in his classes.

In addition to focusing on parent-outreach, Principal Cruz hopes to create a sense of community both in and outside of the school because, as she states on its Web site, “Our mutual success is the only option.”

While it’s too soon to tell whether the transition will be a clean slate for the school, it does appear that the students have a lot more to be proud of than they’ve had in a while.

At the event, Principal Cruz spoke rather candidly about the school’s reputation.

“Three years ago, if an organization had been looking for a school to help, West Philly would not have been the place,” she told students. “The perception was ‘Weren’t these the students who set the place on fire and beat up teachers?’ There wasn’t anyone who would touch us with a 10-foot pole.”

This may have once been the case but with so many organizations and partners now working to create more opportunities for the students, Slappy says, “It’s impossible for the school not to get the attention it needs.”

As far as she’s concerned, the only thing standing in the way of the school’s improvement are excuses.

“We can’t go on saying ‘Oh, well African-American students don’t test well and that the teachers don’t care about the students at this school,” she says. “Everybody has to step up and play their part.”