A farmer’s market, held every Saturday in the Piazza’s courtyard, has brought some traffic to the area, but not enough.

Bambi Gallery owner Candace Kerch sighs, her large, glassy brown eyes taking in the store around her. There are shelves of silver rings and feather earrings, racks of men’s ties, a row of photographs from young Fishtown artist Justin Coffin and not a single customer in sight.

“It’s like throwing a big party every day and having no one show up,” she says. “I’d love to see both of these doors wide open, with people constantly coming in and out.”

But Kerch – like the other business owners who recently opened stores in Northern Liberties’ Piazza at Schmidt’s shopping center, where Bambi Gallery is located – knows that it’s going to be a long time before she sees that kind of success.

The Piazza at Schmidt’s, located at 1050 N. Hancock St., just off of Girard Avenue, was originally envisioned as a “five-minute neighborhood” when developer Bart Blatstein first began planning the 80,000-square-foot open-air plaza, apartment complex and shopping center in January 2000. His plan was to create a bustling community where residents could eat, drink, shop and play – without ever venturing more than a couple of blocks away from their homes. 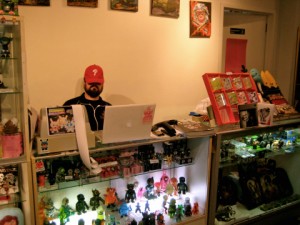 Mike Supermodel, who owns Jinxed, says that it's "tough right now" to be a small business owner.

The buzz surrounding the project helped attract a diverse group of more than 30 small businesses to the Piazza’s commercial space, including restaurants, galleries, boutiques and a record store.

But when the Piazza finally opened on May 16, 2009, Philadelphia was in the heat of a recession. The unemployment rate soared to a staggering 10 percent that month.. The city’s residents were looking for ways to cut back on their spending – not to spend more.

Since then, not much has improved. The unemployment rate remains at 10 percent, and the Piazza’s retailers say that business is still just as slow as it was when the shopping center first opened.

Mike Supermodel, who owns Jinxed, a small boutique that operates out of the same space as a gallery called The Toothless Cat, says that part of the problem is that many of the stores in the Piazza sell “luxury goods” – clothing, jewelry, knick-knacks and art that people want but don’t necessarily need. He also thinks that the Northern Liberties neighborhood has yet to fully establish itself.

“Even though this has been an up-and-coming neighborhood for 10 years, it still hasn’t really found its identity yet,” he said.

Jinxed, which used to be located on South Street, was on the verge of closing when Supermodel heard about the opportunity to move into a space at the Piazza.

“South Street was once considered the hip district in town, but recently I’d say 50 percent of the stores have closed,” he said. “The rents are really high, and ten years ago, that was fine, because we were very busy down there, but when business started slowing down and the rent stayed high, we decided to move up here.”

The relocation has helped keep Jinxed afloat, but it hasn’t necessarily brought in more business. “Things are definitely tough right now,” he said.

Carli Orth, owner of Lyla Designs, which sells handmade bags, pillows and home accessories, has felt the pressure of the recession as well.

“I can’t afford to hire employees, so I’m here six days a week,” she said. “Basically, I’ve been working for the last nine months without paying myself, so it’s extremely challenging and very difficult to put your heart and soul into something and not take a paycheck. But that’s one of the sacrifices you make when you decide to open a small business.”

Aaron Ruxbin, an employee at Creep Records, says that the key to attracting more shoppers to the Piazza lies in event planning.

“You just try to stimulate reasons for them to come [to the store],” he said. “So we’ve been having record releases, we had an art show here, you know, generally trying to make special events out of it instead of relying on the day-to-day window shoppers.”