“Mobile Internet expands people’s realization of the power of the Internet,” said, Michael Morgan, an industry analyst on mobile devices for ABI Research, “you know you can be connected to information wherever you are.”

“Wireless Internet is the most pervasive device you can imagine,” said Justin Shi, the associate chair of Temple University’s Department of Computer and Information Sciences. Wireless Internet constitutes the last mile of Internet connectivity said Shi, it connects those who are hard reach through wired networks.

Wireless Internet is becoming the connection of choice for the majority of Americans. In 2009, 56 percent of Americans accessed the Internet wirelessly, according to the Pew Internet and American Life Project.

“I go online with my phone a lot, maybe every hour to check my e-mail,” said Rod Quemuel, a smartphone user. Quemuel uses his phone to do research, check Facebook and look up directions. 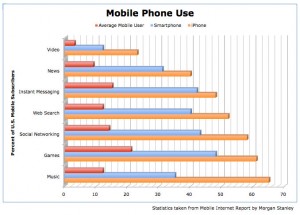 James Thomas, a mobile Internet user, said, “I use it for things that have something to do with the city, like SEPTA bus schedules.” Thomas also uses it to entertain his daughter when traveling. She can play games and watch movies using his phone.

“Mobile access strengthens the three pillars of online engagement: connecting with others, satisfying information queries, and sharing content with others,” John B. Horrigan, associate director of the Pew Internet and American Life Project, said in a press release. “With access in their pockets, many Americans are ‘on the fly’ consumers and producers of digital information.”

Mobile Internet is helping to bridge the digital divide. “Mobile Internet is allowing people who couldn’t afford any web access something,” said Morgan. “It’s the cheapest, easiest, and best way to get them the power of the Internet.” Cox and Thomas only access the Internet through their smartphones, and they do not feel the need to get a home broadband connection.

Cost, convenience and portability are of the three main determinants when purchasing mobile Internet versus home broadband.

“Its a lot easier and a lot more accessible,” said Thomas. “Also, I can take it anywhere.”

“I prefer my laptop for Internet,” said Quemuel, “with mobile phones you can’t see all the features with a laptop.” Quemuel only uses his mobile Internet for basic searches.

While mobile Internet helps to close the digital divide as far as access to information is concerned, it does little to help with actual computer skills. “Mobile Internet offers no keyboard or mouse experience,” said Morgan. These are essential skills when using a traditional computer and are important skills in the workforce. However, Morgan added that helping people understand the value of the Internet is just as important as technical skills in the bridging the digital divide.

Shi believes that currently mobile phones do not have the capability to close the digital divide, but that may change in the future. As the technology develops, mobile devices will become people’s primary computing platform.

According to the eMarketer, a research firm, the total number of mobile Internet users is expected to reach 134 million people by 2013.