“Are they giving something away?” asked the trolley driver as he passed Szypula Bakery on Richmond Street in Port Richmond.

This line of people pouring out of the doors of Szypula Bakery on Good Friday does not reflect a typical business day. In fact, this scene does not even reflect a typical Friday, as this bakery is only open on Saturdays. With the exception of those who visit the bakery during its regular Saturday hours, most customers shop during Christmas and Easter.
This shopping pattern displays the shopping trend on Richmond Street now days.
As Connie Jesiolowski, owner of Szypula Bakery, points out, “People don’t walk on Richmond Street, unfortunately. It’s a destination place.” She went on to explain that people go to specific places on Richmond Street. Unlike nearby Allegheny Avenue, Richmond is not a place where people can wander and stumble upon businesses. People venture onto Richmond Street because they are looking for something specific. It’s not a place where people to go to see what shops are around.
While many of the Richmond Street business are struggling, they still have a loyal group of visitors. This has to do with the fact that these business have been around for decades.
Penner’s Floor Coverings has been in business for 60 years on Richmond Street. Allen Penner, the owner, says that the carpet company has established a long-term relationship with customers. This long-term relationship has helped to keep the company afloat. It may also help that the company has stayed in the family. Penner’s father started the business and two of his cousin’s along with his son, help out from time to time.
While some attribute the decline in business on Richmond Street to I-95, Penner believes it was simply “a catalyst for why the businesses shut down, but it would have happened anyway.” Jesiolowski believes that I-95 “tore the neighborhood apart.” Her experience on Richmond Street is more personal since she grew up across the street from the bakery. Jesiolowski’s brothers even worked there while they were growing up, which explains why her brother Dave, purchased the bakery in 1985.
Casimir Barbershop owner, Casimir Kowalski, attributes the decline in new customers to changing times and styles. “In ’67 people came in with long hair to keep it long. It was shorter before.” People have also become more independent in an attempt to save money. When Kowalski asked a regular customer if he wanted his mustache trimmed, the man declined, explaining that he does it himself.

This decline in business does not hold true for the other businesses on Richmond Street. Karkus Market is a Polish market that sells Polish deli meat, sausages and Polish meals. There is also an area to sit down and to eat on the right side of the market. For 23 years Karkus has held the distinction of being the only Polish market in Philadelphia.

With the exception of Penner’s Floor Coverings, business for Szypula, Karkus and Casimir’s Barbershop swells around Easter. People purchase Polish baked goods and other foods, and the men come back to Casimir’s for a holiday cut. Even though Richmond Street has changed, people still come back to these businesses.
Most of the former Richmond Street businesses would never survive if they were currently still in existence. In 1939, according to “Port Richmond: Before 95”, Richmond Street was a shopping district. This is hard to imagine with its current abandoned store fronts. During that earlier time there was a meat market, hardware store, shoe store, dress store, plumbing and heating, furniture store and a jewelry store.
The drastic change on Richmond Street represents a change in the way people spend their daily lives. People no longer go to bakeries to purchase bread. Instead, they go to the bakery aisle at their local supermarket. Freshly baked bread isn’t a priority anymore because it isn’t cost efficient.
Kelly Suarez said her holiday return to Szypula Bakery is a treat. Like many of the bakery’s customers, Suarez grew up in Port Richmond, but she never moved out. Shopping at Szypula Bakery is more of a family tradition. Customers know what they want because they have been going there for years. Suarez, for example, purchases chrurstikis and rye bread. All of the regular holiday customers know exactly what they want unless it’s their first time there.
Richard Jackson is a first-time customer, who discovered Szypula via a Google search for Polish bakeries. The Abington Township resident 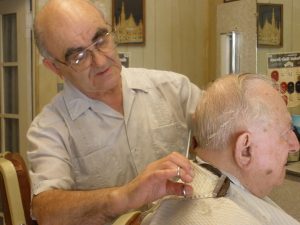 married into a Polish family. He considers the bakery a bit of a legendary place, “where the old folks went.” Arthur Krol, on the other hand, has been coming to Szypula for 15 years. Krol travels in from suburban Upper Moreland Township with his grandchildren to pick up his order at the bakery and to shop at Karkus Market.
There is a sense of security for those who are Polish in Port Richmond. Henry Rojek, for example, has lived in the United States for 14 years. He is regular customer at Casimir’s Barbershop. Despite his years in the country, Rojek is not fluent in English. Haircuts at Casimir’s Barbershop are more of a necessity because he can communicate in Polish. Joe Narodowski has been a customer at Casimir’s for 30 years. Although he has since moved out of Port Richmond, Narodowski does all of his business in his old neighborhood. Once or twice a week, he comes back to Port Richmond to go to the Polish bank, buy Polish food and get his hair cut by a Polish barber. This loyalty is what helps keep local businesses alive.
While there is still a large group of people who frequent the older establishments, it’s still not enough to restore Richmond Street’s retail strip to its former glory.
Bakery owner Jesiolowski hopes that “Port Richmond comes back to what it used to be. We’ve seen it in Fishtown and Northern Liberties where it’s growing again.”
With the number 15 trolley driving straight down Richmond Street, it should be a matter of time before people take renewed interest in this area.