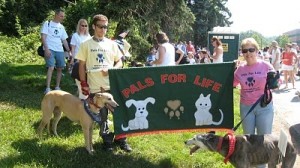 The girls at Rizzo Police Athletic League (PAL) learned how notorious animal abuse has become and the harmful effects that come out of dog fighting through the help of Kim Wolfe, a social worker, and Sarge, her 16-year-old pit bull.

“All I knew was that I was going to be speaking to a group of young girls,” said Wolfe. “By bringing in Sarge, it opens up opportunities to speak to the girls in a [language] they can relate to.”

For the first 14 years of Sarge’s life, he was owned by an alleged dog fighter and was abused. Wolfe rescued him and uses him as an example of the importance of animal safety.

“When Sarge and I go out and meet people, I like to figure out a good angle that I can use to talk to people,” Wolfe explained. “The [PAL] girls got me thinking back to when I was a young girl and the labels that are placed on them on a daily basis. That is exactly how it is with Sarge. There are a lot of labels and expectations placed on him because he spent his whole life in an abusive home. People expect him to be nasty and aggressive, but really he’s not. That’s what these girls can apply to themselves. They might here that they cannot be a leader because they are young or whatever or not be as smart as boys, whatever it is, but they can overcome that because everyone is their own person.”

Many of the girl’s major concerns dealt with how to help abused animals and asked Wolfe what they can do to solve issues regarding animal cruelty and animal abuse and how to recognize signs of it.

“The girls loved it,” said community leader Patty-Pat Kozlowski. “Sarge was a big tootsie roll and I think he helped the girls realize this is something important.”

“I just hope the girls can take something away from this,” said Wolfe. “I want them to know that the environment that you’re placed in does not have to predict your future.” 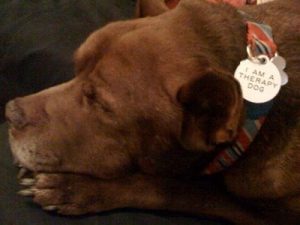