The Philadelphia Police Athletic League, or PAL as most people identify it, is an independent non-profit organization that began in 1947. Its mission statement is comprised of several ideas revolving around one central theme–making a positive difference in a child’s life. PAL’s Positive Images program is one specific representation of how young children, specifically adolescent girls, can better themselves with the help from community officials, like police officers, City Council members and any community leader.

Officer Ernie Rehr, director of the Rizzo PAL chapter at 2524 E. Clearfield St., has been absorbed in the positive images program, as its director for 20 years and has served 26 years on the Philadelphia Police Department.

“PAL is a unit within the Philadelphia Police Department,” Rehr explains. “I asked for a transfer to the [Rizzo Center] in 1990, and have been here ever since.”

Rehr helps out at the PAL everyday but always makes time for the girls who attend the Positive Images program–all 66 of them.

“My motto here is, ‘When you empower a child, the possibilities are endless,” Rehr says. “I just want to convey to them 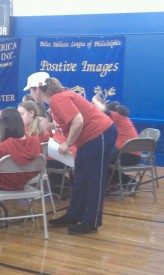 that the world is there’s for the taking. Just make those positive and right choices in life and you will be very successful.”

Rizzo PAL’s Positive Image program lasts 11 weeks at a time, beginning in the fall and ending in December right before Christmas. The program goes on a small hiatus, then commences the following February.

Keeping 66 girls interested in an educationally supported, after-school program for 11 weeks can present some challenges at times. So the members of Positive Images mix up various events and presentations to keep the tweens focused and actively involved.

Monday nights consist of a variety of events ranging from scrapbooking to Zumba classes, dancing and karaoke nights to self-esteem building workshops.

One memorable night for all the PAL girls was the night Peter Sabasino, from the TV show, “So You Think You Can Dance,” came into the center to teach the girls some new dance moves. Through his cardio workouts, not only did the girls have fun, they were kept on their feet.

On Monday, Nov. 8, another star role model came into talk to the girls about how education can take them to places they never thought they could go.

Kathy Killian, director of Group Sales for the Philadelphia Phillies and former PAL kid herself, told the girls, “Your generation is so much smarter than we ever were. Every girl in this room has so much potential…use it to the best of your ability.”

Young girls learn the values of having a high self-esteem through the examples lead by speakers who come in specifically to address reoccurring negative issues.

“I was hooked right from the atmosphere,” says Laura Kelly, a Rizzo PAL staff member. “It’s non-competitive for kids just learning. The girls are taught good sportsmanship [skills] and how to get along with other people. It’s a really good 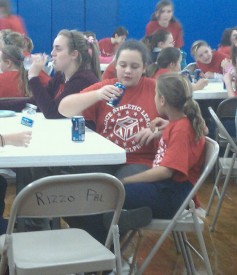 When talking to the girls who regularly attend weekly Monday night events, one thing is universal–they remember specific nights that PAL has made a difference to them.

“I’ll never forget the first year I came,” says Veronica Cepparullo, now 16 and a member of PAL’s Positive Images program for two years. “We did a skit where we pretended to be wrestlers. We learned about not fighting with each other and how to get along with each other. That always still sticks in my mind.”

Season veteran attendee of PAL’s Positive Images program, Emma Hetrick, 14, has been involved for five years and echoes Cepparullo’s notion of positive impact the program has made on her life.

“The lessons I’ve learned through Positive Images, [specifically the idea] to stay positive throughout everything, stands out to me the most,” Hetrick says. “Something I struggled with before the program was doubting myself. The program brought up my self-esteem.”

“When I was younger, I was bullied,” admits Cepparullo. “Being involved with Positives Images just builds up your self esteem and lets you know everything will be ok. You’re safe with them,” Cepparullo adds with a smile.

What most people may not realize is that Cepparullo’s situation is not an uncommon one. According to the National Youth Violence Prevention Resource Center, nearly one in three, or 5.7 million children, are involved in bullying either as victims or perpetrators, over the past year. Also, kids who are obese, gay or have disabilities are up to 63 percent more likely to be bullied than other children. With the result of these statistics, as well as the current increase of suicides among gay youth, it is quite obvious that more programs, like the Positive Images program, need to take a stand and get involved with the youth in their community.

Rehr believes that through Positive Images, these dark feelings can be replaced with positive ones that can result in a happy future for young girls who may not be happy at the moment.

“Just being able to be a part of the upbringing of a child here in the Port Richmond area is very rewarding for me,” says Rehr. “I take it very seriously.”