His sound is distinct. His melodies captivating. His artistic vision pioneering. And the house where he developed his art exists in Strawberry Mansion. 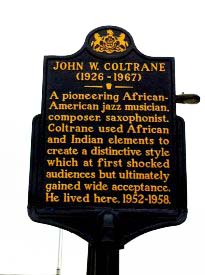 The legendary John Coltrane, the famous jazz musician and composer, called Philadelphia his home from 1952 to 1958. Located in Strawberry Mansion at 1511 N. 33rd St., the house he called home in Philadelphia is currently listed as a National Historic Landmark.

Coltrane was an influential pioneer in jazz and helped play a central role in the development of the genre during the 1950s and 1960s. He was so influential that an entire harmonic progression is used in modern jazz today and was developed by him and named after him.

In 2007, Coltrane, who died in 1967, was awarded a posthumous Pulitzer Prize citation “for his masterful improvisation, supreme musicianship and iconic centrality to the history of jazz.”

His former house, however, is a different story. “This is an extremely important building,” said Lenora Early, the current owner and chairperson of the John Coltrane house. “As important as any other historical building in the city of Philadelphia.”

In 1999, when the site was designated for historic preservation it was owned by Mary Alexander, Coltrane’s cousin. In 2004 she sold it to Norman Gadson, who upon his death passed it in trust to Lenora Early, who currently owns the property.

“There are only 2,400 National Historic Landmarks and it takes a lot to get that status,” Early said.

“The house itself needs work, but it’s in fairly decent condition,” Early said. “To restore it the way we would like is going to take some money, but it’s not as though it were in a state which I’ve seen some.”

A team of experts, which included several representatives from the National Park Service as well as an architect, ended up giving a list of recommendations to structurally correct what is currently wrong with the house.

Early’s advisor for the building, Ira Moseley, said he shares the vision of restoring the Coltrane house to its former glory.

“The building has so many fixtures inside, it has to be forensically taken care of,” Moseley said.

Among the most pressing matters are to repair the electricity in the house to comply with Philadelphia electrical code, install a security alarm and fire detection system, roof replacement and repairs to the wall with the adjoining building.

With all these improvements needed, Early has not wavered from her goal to restore the house and show the public the home where a great jazz legend once lived.

“This is a home where one of the greatest jazz musicians and composers lived, a giant in 20th century music,” Early said. “We’re looking to total restoration eventually. We want this to be the house that John Coltrane lived in, not something different.”

Moseley mentioned a collaborative effort with several aspects of the community to raise enough money to complete restorations acceptable enough to allow visitors.

“There needs to be a capital campaign to reclaim lots of the instruments and other memorabilia also in the house that has since been auctioned off,” Moseley said. “The public deserves the right to have that kind of stuff back in the city because it has a great footprint to be a good tourism attraction in the Strawberry Mansion area.”

Although Early and Moseley would like to have the house’s restoration completed as soon as possible, they are realistic in what amount of time it will take to completely overhaul and fortify the house.

“In terms of a time frame, you really can’t say because it’s delicate,” said Moseley, indicating the amount of improvement needed for the house to reach its full potential. “It’s going to be in the excess of several million dollars for the restoration of the building.”

Because of the large amount of money associated with rebuilding the structure, Early created a non-profit group. Early said the name of the organization will be johncoltrane.org.  The site hasn’t launched yet.

The two in charge of restoring the house said they  feel it will also take a community effort to finish the project.

“The key thing is to put together a right kind of strategy, a right kind of time frame, we need a complete buy in from all of those entities in the public because they’re all stakeholders,” Moseley said.

“We want the community to be involved,” Early said. “Whether we’re out here with a sound system playing his music or selling T-shirts.”

Early said she believes the closeness from key spots in the city and her plan when guests eventually can stop at the house will encourage visitors.

“People can come, take a tour and [we can] inform them with the narrative of the life of John Coltrane and his family who lived here with him,” Early said. “There are stories where he would come back from a tour and he would play his saxophone on the back porch.”

Coltrane’s contribution to music are important and should make his home a place for people to visit.

“He was a master of finding new ways of expressing himself,” said Joseph Veltri, a music enthusiast.

“He was clearly a student of his art form,” Veltri said. “Definitely a genius. I think the most important thing was he was an innovator.”

Perhaps Philadelphia’s most important contribution to Coltrane’s life may be represented on 33rd Street in  Strawberry Mansion.

With the public’s help, people might see  Coltrane’s legacy on his old porch.